Colormaps Constructed with an Artist in the Loop

Working with COSIM climate modelers at LANL artist Francesca Samsel and the Data Science at Scale Team, LANL developed colormaps that enable scientists to see more detail within their simulations.  The colormaps move through changes in hue, saturation and value to create a longer line through colorspace.  The maps have been user tested for their ability to show even and accurate detail. Here are a few of the user study “winners” to be added.

On a practical note, the colormaps draw a longer line through color space by independently specified H, S, and V values.  Some maps have 20 control points, others over 40.  Removing some control points, as long as you are adjusting in LAB space, is fine, but you will lose some of the detailed color contrast which is what makes these maps effective.

A special thanks to James Ahrens, Data Science at Scale, LANL, for leading the way and to Greg Abram, TACC, UT Austin, for the tools to translate color theory into pixels. This material is based upon work supported by Lucy Nowell, Computer Scientist and Program Manager, Advanced Scientific Computing Research, Office of Science, U.S. Department of Energy. Award Numbers: DE- SC-0012516 and LA-UR-15-20105.

THE COLORMAPS….. that made the cut

Extended Cool / Warm – This colormap moves through a wider range of hue and saturation than current standards.  Useful if you are looking for a greater level of detail.

Hue-Extended Warm Cool – This map conatins more contrast within the context of a cool warm format via extended hue ranges.  It is a favorite of climate modelers.

A key principle from the design community, “Less is more.”

The asymmetrical maps were first developed to take advantage of the larger perceptual range within the green spectrum.  They quickly became popular for their ability to show a greater level of detail, especially when combined with the reverse function in the colormap editor.  Below is a temperature visualization of the POP ocean model from the COSIM team at Los Alamos National Laboratory. It has the additional value of highlighting the Gulf Stream. 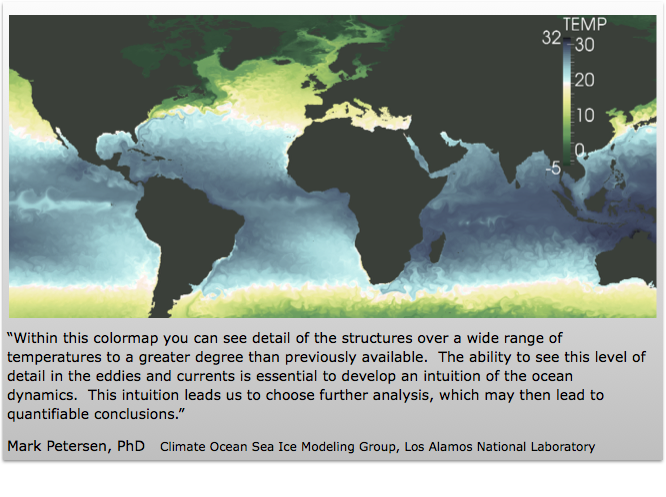 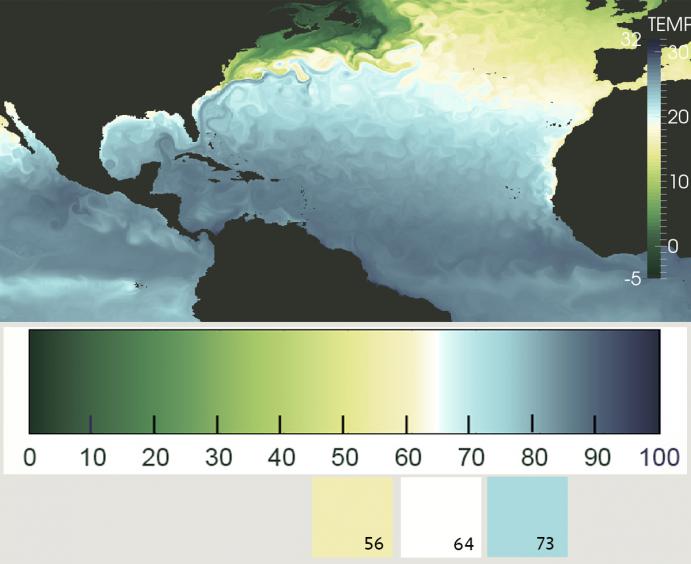 Green 917 – A linear colormaps that moves through saturation and hue shifts to create greater contrast.

Yellow 15 – moving through hue and value.

5 comments to Colormaps Constructed with an Artist in the Loop