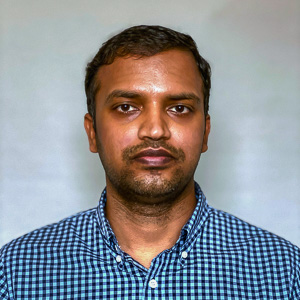 Sreekanth Arikatla is a technical leader on Kitware’s medical computing team in Carrboro, North Carolina. His primary areas of interest include numerical methods aimed at physics-based real-time simulations, computational mechanics, virtual reality, and computer graphics. He currently leads the real-time simulation efforts at Kitware. For example, he is the architect and lead developer of Interactive Medical Simulation Toolkit.

Prior to joining Kitware in May 2015, Sreekanth was a postdoc at the Center for Modeling, Simulation and Imaging in Medicine (CeMSIM) at Rensselaer Polytechnic Institute (RPI). He received his M.S. and Ph.D. in mechanical engineering from RPI in 2009 and 2014, respectively. During his Master’s work, he developed and validated a virtual skill trainer for peg transfer. For his doctoral dissertation, he developed multigrid algorithms aimed at enhancing the update rates of physics-based deformation simulations in interactive virtual environments. He also worked on cost-effective predictor-corrector-based approaches to simulate frictional effects with arbitrary (frictional) models. Potential applications include game engines and surgical simulators.