I spent three days immersed in All Things Open and the Opensource.com moderator meeting two weeks ago (18-20 October), and was kindly hosted by the Opensource.com team as one of their community moderators. I had the privilege to attend last year too, and this is quickly becoming a highlight on my travel calendar. The conference is only in its third year, and plays hosts to some of the biggest names in open source. 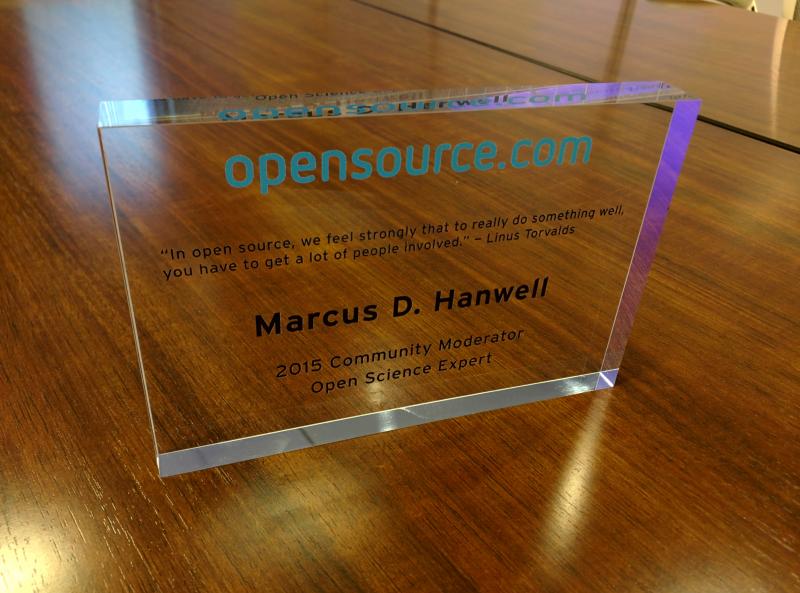 My trip began with the Opensource.com moderator meeting, hosted in Red Hat Tower in downtown Raleigh, NC. We had a full day of meetings discussing how we can improve the content on Opensource.com, and the level of interaction with site visitors. We also discussed the moderator program itself, process improvements, and had the opportunity to get to know each other better in real life for a day. I was also given a plaque by Jason Hibbets and Rikki Endsley shown above. 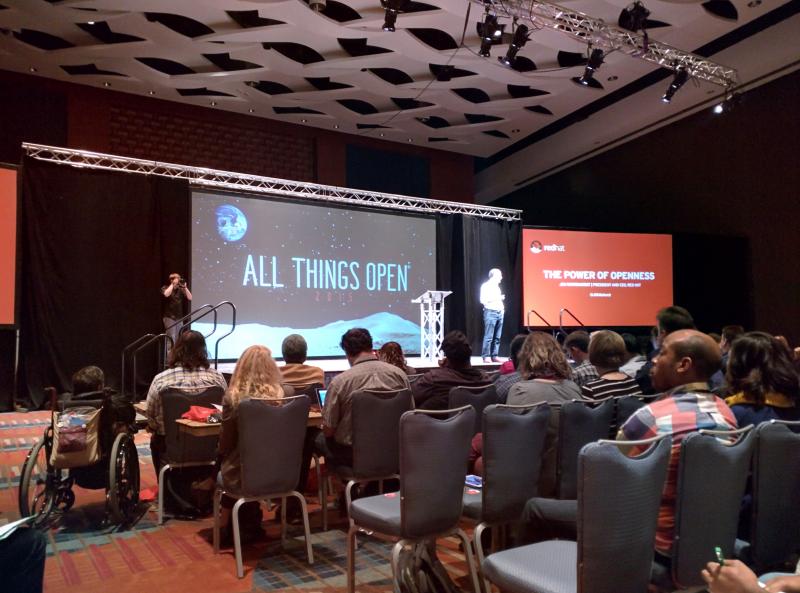 The next day was the start of the All Things Open conference, minutes away from the Red Hat Tower. I think the highlight of my trip was listening to Jim Whitehurst's keynote about what he calls the open source way, and how it can be applied to organizations. I really enjoyed reading his book, The Open Organization. Now that he has had a chance to talk to so many others about this he gave some very honest accounts of how it is practiced at Red Hat, and thoughts on how these approaches can be applied more widely.

I also had the opportunity along with the other moderators to have lunch with Jim and a few other Red Hat associates to talk about the keynote and the book in more detail. The book really spoke to me as someone who spent many years working in distributed open source communities before finally getting a "real job". He spoke about Red Hat's early years, and how they worked to translate open principles to an organization, and his struggles moving from more traditional companies to his current position. I liked the phrase he used where he (and Red Hat) don't see themselves so much as leaders, rather than as catalysts.

The rest of the conference was also a lot of fun, I met with Jono Bacon after having seen him speak a couple of times before. I got a signed copy of his book on The Art of Community, and am looking forward to taking a closer look at that. There was a lot of discussion about how containers are changing the face of large scale deployments, and how devops is changing the very nature of the development/deployment cycle. I saw some interesting discussions on the move towards microservices, and becoming more language agnostic as a result – each microservice is self-contained, leading to increased modularity and agility.

There were great discussions of diversity in open source and the technology sector. Looking at how things can be improved, and some personal accounts from the trenches. I saw great discussions on the increased use of social media, and communicating with the media. Another highlight for me are the previews of videos created by Red Hat to highlight the open source way and its impact. The first was a short preview of Charlie Reisinger's work at Penn Manor in open education, and the next day the full length e-NABLE's open 3D printed prosthetics. Very inspiring, and I highly recommend watching both.

I can't wait for next year, and really didn't have time to talk about everything. Great opportunity to meet many leaders in open source, and the wider open movement. I also went to a number of hands-on sessions to learn about front and backend web technologies in my journey to becoming a full stack engineer.