IGSTK User Group Meeting
In February the sixth annual IGSTK user group meeting was held in conjunction with SPIE Medical Imaging in San Diego, CA. This meeting is an opportunity for the IGSTK user and developer communities to come together and discuss updates on the toolkit and its use in the field. One of the highlights of the meeting this year was the new breakout session to gather community input and feedback on the toolkit. Participants were broken into smaller working groups to answer several questions pressing on the IGSTK team. Responses were then consolidated into a summary for three areas: new features, biggest hurdles and project promotion ideas. The full list can be seen on the Kitware blog, and to continue the discussion, please send feedback to the IGSTK mailing list.

The basic research, which stems from the DARPA CARVE program, seeks to determine if pre-planned or scripted coordinated activities can be automatically detected using automatically computed and highly fragmented tracks from video. American football was chosen as a surrogate problem domain as it shares many of the difficulties of reconnaissance video, including difficult tracking, interacting agents (players), high variability within the same play type, and active deception.

The approach pushes the model complexity onto the observations by using a multi-variate kernel density while maintaining a simple HMM model. Temporal interactions of objects are captured by coupling the kernel observation distributions with a time-varying state-transition matrix, producing a Non-Stationary Kernel HMM (NSK-HMM). This modeling philosophy specifically addresses several issues that plague the more complex stationary models with simple observations, i.e. Dynamic Multi-Linked HMM (DML-HMM) and the Time-Delayed Probabilistic Graphical Model (TDPGM).  These include: smaller training datasets, sensitivity to intra class variability and/or dense uninformative clutter tracks. Experiments are performed in the American football video domain, where the offensive plays are the activities. Comparisons are made to the DML-HMM and an extension of the TDPGM to DBNs (TDDBN). The NSK-HMM achieves a 57.7% classification accuracy across seven activities, while the DML-HMM is 26.7% and the TDDBN is 21.3%.  When tested on four activities the NSK-HMM achieves a 76.0% accuracy.

Kitware Debuts New Employment Site
Kitware is an exciting, interesting place to work. Not only is the company doing cutting-edge work with real-world impact, but the people and culture make it a vibrant workplace. To bolster our hiring efforts and showcase the cultural side of Kitware, we have developed a new employment website. The site features all of the unique reasons people love working for Kitware, from flex hours to Birthday Bagel Mondays to our open-door policy. There are also entertaining profiles of Kitwareans, to help give potential employees get an idea of who they would be working with, including several company founders. To see the site and our open positions, visit www.jobs.kitware.com. 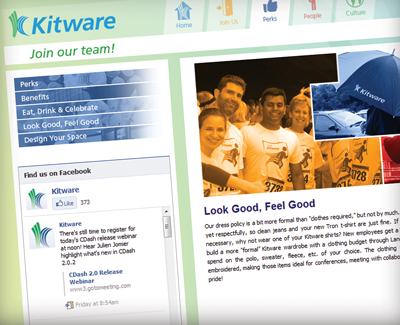 Kitware Participates in inSCIght Podcasts
Kitware now sponsors and participates in the inSCIght podcast series. inSCIght is a weekly podcast that focuses on various forms of scientific computing, bringing expert panelists together in head-to-head discussions. Matt McCormick and Luis Luis Ibáñez volunteer as part of the inSCIght team, and other Kitware team members have participated as special guests in podcasts on topics including version control, open access, clean code and cross-platform build tools. To listen to previous podcasts and follow inSCIght, visit their website at www.inscight.org.

ParaView & Atmospheric Climate Modeling
Kitware participated in the development of the animation “NSF/DOE Community Atmospheric Model: Total Precipitable Water” for the Climate Science Computational End Station (CCES). The video shows results from a CAM simulation that was run at Argonne National Laboratory. This research was recently presented as part of the keynote address at the 92nd American Meteorological Society Meeting in New Orleans, Louisiana.

The animation of the simulation results was created by Joseph Insley of Argonne, with help from Kitware’s Andy Bauer,  using ParaView. This research project is being conducted by a collaborative group from the National Center for Atmospheric Research, Sandia National Laboratories, Argonne National Laboratory, and Kitware.

In order to model such a complex system, the simulation code required 25 million core hours across 64,000 cores of Blue Gene/P, Intrepid, producing 0.25 simulated-years-per-day. The video depicts two months of the 27 month-long simulation. Using both the CAM5 physics and the highly-scalable spectral element dynamical core, this simulation of total precipitable water clearly shows developing hurricanes in both the Atlantic and Pacific oceans.

This research is important to the CCES, which aims to predict future climates by using scenarios of anthropogenic emissions and other changes resulting from U.S. energy policy decisions. It will be used to improve the scientific basis, accuracy and fidelity of climate models to address their impact on national policy.

Julien Finet and Jean-Christophe Fillion-Robin presented the work done on Slicer4 and worked with users to get feedback to guide the development of new models.

Benjamin Long presented work on automated GUI testing using Qt and Python, which is derived from methods used by the ParaView team.

Stephen Aylward presented “NA-MIC Software Processes and Future Plans” to the External Advisory Board and representatives from the National Institutes of Health.

Upcoming Conferences and Events
Big Data Conference
May 9 in Arlington, VA. Dr. Anthony Hoogs will present a talk entitled “Big Video Data: Getting Salient Content out of Many Pixels.”

Ter@Tec
June 27-28 in Paris, France. Will Schroeder will present a keynote address at the event.

Computer Assisted Radiology and Surgery (CARS)
June 27-30 in Pisa, Italy. Danielle Pace will present a paper entitled “TubeTK: An open-source toolkit of algoritms operating on images of tubes” as part of the Image Processing and Display session.

KDE Akademy
June 30-July 6 in Tallinn, Estonia. Will Schroeder will present a keynote speech at the annual KDE summit.

OSCON 2012
July 16-20 in Portland, OR. Luis Ibáñez will attend OSCON. We anticipate that Kitware will present a talk and a tutorial.

New Employees
Johan Andruejol
Johan Andruejol joined the medical team at Kitware’s North Carolina office in February. Johan completed a year-long internship with Kitware before joing the team full time. He is currently in his fifth year at CPE Lyon, where he is focused on image synthesis and processing.

Christie Kil
Christie Kil joined the computer vision team as an annotation specialist at the Clifton Park office in February. Christie earned her M.S. in political science and American studies from Seoul National University, and her M.S. in international affairs from the Georgia Institute of Technology.