Kitware’s Data and Analytics Team has created the interactive Ebola Outbreak Timeline to provide a visual representation of the 2014 outbreak that aggregates news, case count information, and a generational disease outbreak model by Caitlin Rivers and Fisman et al. All of the news articles featured in the timeline were provided by HealthMap.

The motivation behind the timeline is to increase awareness of the outbreak. Using the arrow links at the top of the website, viewers can take a guided tour of the data. The interactive controls can be used to further explore the data and review the linked new articles.

(Please note that the web page looks best in Chrome.)

Below the news article timeline is a second infographic that depicts the outbreak cases over the same date range. Controls allow you to view this information as a hypothetical tree showing transmission links or graphed by the sum of cases reported over time (in total or broken down per country). Note that the hypothetical tree depicts random estimated transmission links, as the true and complete data tracing individual transmission is not available and is likely not even possible to obtain. The transmission tree is estimated using existing case count data [1,2] and a generation-based model. Assuming a 15-day generation model [3], each generation’s cases are randomly assigned a “parent” from the previous generation. Where no data exists (in the Origin period before March 2014), case counts were extrapolated backward assuming a 2x growth rate as indicated by researchers [3].

The other two tabs of this infographic can be used to view the sum of the cases reported over time, either combined (Case count) or as a separate sum per country (By country). In both instances, the icons depicting the reported cases are color coded by country.

In addition to the interactive outbreak timeline, we created a video that traces the outbreak from its onset in Guinea to other countries including Spain and the United States. The video depicts a sequence of key events that played a major role in spreading or introducing the Ebola disease to neighboring and distant nations. In this visual story of the 2014 Ebola Outbreak, the key events are organized on a horizontal timeline and are displayed in sequence at the appropriate time during the animation.  The dataset was collected from various news reports, from WHO, and from other resources.

Another visualization created by the team demonstrates social awareness and activities related to the Ebola outbreak in real time. In this visualization, a live Twitter stream containing hashtag Ebola is visualized in a geospatial context. The Tweets are geolocated as they come through the stream. Multiple Tweets from the same location are drawn on top of each other. 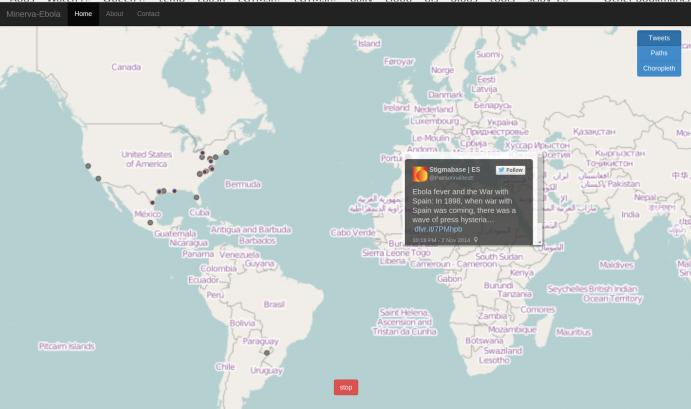 A mouseover on a Tweet or collection of Tweets displays the text and media in a context-popup.

The Ebola Outbreak Timeline and video are brought to you by Kitware’s data and analytics team. Earlier this year, the team also developed a visual representation of the Ice Bucket Challenge participant network, which captured the true scale and proliferation of the challenge, while highlighting the interesting connections between the participants. For more information on Kitware’s data and analytics expertise, please contact us at kitware@kitware.com or at (518) 371-3971.

We would like to thank Nico Preston (HealthMap), Roni Choudhury (Kitware), and Jonathan Beezley (Kitware) for their work, support, and guidance.