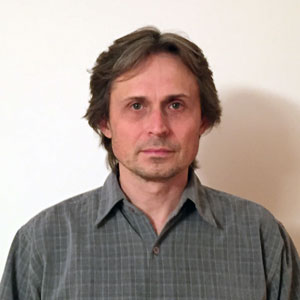 Eugene Borovikov, Ph.D. is a staff R&D engineer on Kitware’s Computer Vision Team located in Arlington, Virginia. Eugene actively contributes to the R&D in the area of 3D computer vision, addressing sensor calibration and scene reconstruction problems in a number of government-sponsored projects, expanding the capabilities of TeleSculptor and the KWIVER framework. His areas of focus are multi-perspective high-performance computer vision, machine learning, and robotics.

In addition to research and development, Eugene is also involved in business development through proposal writing and establishing and maintaining relationships with academia and business entities. He is also responsible for publishing the team’s R&D findings in peer-reviewed articles and presenting them at conferences. Eugene also has a mentorship role where he advises junior researchers and developers.

Before joining Kitware, Eugene was a senior data scientist at Fannie Mae where he advanced real estate image processing/analysis technology. Prior to his time at Fannie Mae, he worked as a senior research scientist at Intelligent Automation contributing to a variety of SBIR/STTR CV/ML projects. In 2016, Eugene taught as an adjunct computer science professor for the Mathematical Foundations of Computer Science graduate-level course at George Mason University (GMU). Eugene worked at NIH/NLM/CEB from 2011-2017 as an image processing researcher. He actively contributed to the R&D efforts of the Lost Person Finder (LPF) project by researching and developing human face matching capabilities in unconstrained images.

In 2006, Eugene directed an R&D team at ADF Solutions tasked with advancing technology for content-based image and video retrieval, collaborating with LAMP lab at the University of Maryland, College Park. During 2003-2010 he was an active member of the R&D team at CACI-Lanham where he was primarily involved in multilingual OCR/ICR and NLP efforts in the document recognition/understanding area. He also authored numerous papers and book chapters on Arabic OCR and handwriting recognition.

Eugene received his Ph.D. in computer science from the University of Maryland, College Park (UMCP). He also received his master’s degree in applied mathematics from UMCP. During graduate school, Eugene worked as a Faculty Research Assistant at UMCP’s computer vision lab, performing research in the area of non-rigid shape recognition in applications to 3D human body shape estimation.

Get to know Eugene

Kitware has a strong computer vision team. I have heard many good things about Kitware from my colleagues. I successfully used Kitware products. I like Kitware’s approach to open science and open source.

R&D in the areas of computer vision and machine learning has always been my passion and a great way to expand my background in applied mathematics and computer science.

My life-long hobby is music: writing and singing songs, playing a variety of instruments, collaborating with other musicians, arranging, and recording. Music is so mathematical and math is so musical, both could be considered fine arts to be infinitely explored and mastered for life.