Insight Journal reaches 500 Articles
On November 30th, the Insight Journal received its 500th paper submission, marking a major milestone for open science. Congratulations to B. Moreau and A. Gouaillard on on their paper “Exact Geometrical Predicate: Point in Circle,” the 500th published paper.

The Insight Journal was launched with support from the National Library of Medicine in 2005 as a fully open-access database for researchers who wanted to share their work with the larger medical imaging community for peer review.

Six years later, the Insight Journal now contains 500 articles representing 80 submissions per year, 819 peer reviews, and more than 2,480 registered users. In this time, the Journal has been established as a central place for open-access research and a model for supporting reproducible science. It has become an important part of events in the medical imaging community, and has been hosting open-access articles for major conferences such as MICCAI.

Robot-Assisted Prostate SurgeryKitware has been awared Phase I SBIR funding from the National Institute of Biomedical Imaging and Bioengineering, a unique joint agency initiative of the National Institutes of Health (NIH), Defense Advanced Research Projects Agency (DARPA), and the National Science Foundation (NSF). The funding will be used to develop an augmented reality visualization prototype for the improving the efficacy and safety of robot-assisted prostate surgery.

Andinet Enquobahrie is the Principal Investigator for this project and will oversee the development of a human/machine colaborative system that creates an augmented reality (AR) view for surgeons. This system will fuse pre-operative MRI models of the prostate, tumor, and surrounding tissues with the da Vinci system laparoscopic video, while compensating for non-rigid prostate deformation with intra-operative transrectal ultrasound imaging.

The project is a collaboration between Kitware, the Center for Computer Integrated Surgical Systems and Technology (CISST ERC) at Johns Hopkins University, and Blue Torch Medical Technologies. The development of this innovative navigation system will address some of the most pressing challenges surgeons face, resulting in safer, more effective surgery and improved prognoses for the quarter-of-a-million men in the United States who will be diagnosed with prostate cancer in 2011. 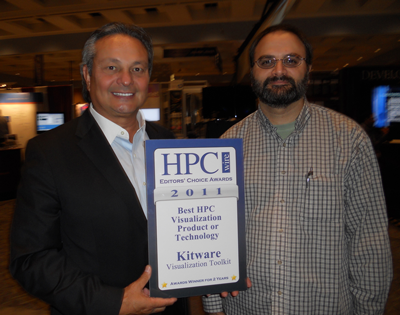 Berk Geveci accepted the award at the 2011 International Conference for High Performance Computing, Networking, Storage and Analysis (SC ‘11) on behalf of Kitware, the VTK community, and sponsors including Los Alamos National Laboratory, the National Library of Medicine, the National Alliance for Medical Image Computing (NA-MIC), the U.S. Department of Energy, Sandia National Laboratories, and the Army Research Center.

Introducing Software Release Webinars
To better support the open-source toolkits and communities, Kitware has started a new software release webinar series. With each major release of any of the open-source toolkits or applications, one of the Kitware developers working on the project will present a brief webinar. These free webinars will highlight new developments and give a preview of what is in the pipeline for the next release. These will be hosted live and we will be answering questions during the webinar. If you cannot attend, you can view the recording a few days after from the toolkits’ website (e.g. paraview.org/webinars). Registration information can be found on www.kitware.com or the various toolkit websites.

Kitware Courses Take on Webinar Format
In September, Kitware announced free, monthly introductory courses for VTK, CMake, ParaView, and ITK. Within days, all scheduled classes were full. To accommodate community demand, we’ve moved to a webinar format that allows for up to 100 attendees per session.

We have scheduled the next round of online webinars. Please visit our website for the official enrollment links.

Kitware Talks with Popular Science
This November, Anthony Hoogs was featured as an industry thought leader in the article “Can Technology Save the Military From a Data Deluge?” from Popular Science. The piece investigates the U.S. military’s challenges  with handling massive amounts of data and the current pace of technology acceleration.

Anthony spoke to the computer vision work being done at Kitware, which includes major projects such as DARPA’s Video Image Retrieval and Analysis Tool (VIRAT) program. “In video we have an important cue, which is motion. It turns out that motion is relatively easy to detect, and you don’t have to know what the object is. If something is moving, the intensity values at that location where the object is or where it was will change, and that’s relatively easy to pick up,” said Anthony.

Dr. Wesley Turner Appointed SPIE Senior Member
Dr. Wesley Turner, a technical leader on the medical imaging team, has been elected as a Senior Member of SPIE, an international society for optics and photonics.
The designation of senior membership is given to members who are heavily involved with the optics community, have at least five years with SPIE, and minimum of ten years professional experience.
Wes has been with the Society since May 2006 and has contributed his technical expertise and management skills to a range of projects including the exploitation of CT and MRI patient scans, microscopy, and bioinformatics.

See the rest of Kitware News in Part II.