Kitware to Develop Autonomous Robot Navigation System
Kitware was awarded $100,000 in Phase I SBIR funding from the U.S. Army to develop a novel robot navigation system that is based on high-level landmarks for use in military and search-and-rescue applications. Autonomous robots can improve safety and situational awareness in a wide range of military and commercial intelligence applications.

This Phase I effort will be led by Dr. Amitha Perera, Technical Leader at Kitware, and is a collaboration of Kitware’s computer vision expertise and Texas A&M University’s renowned robotics capabilities. The team will develop a new robot navigation paradigm that incorporates a multilayered feature graph (MFG) based on high-level visual landmarks into the supervisory control system. The MFG-derived results will be combined with segmentation techniques to extract salient landmarks and build a 3D scene model. Operators will then issue high-level commands such as “follow this wall” or “go around that object” that the robot will autonomously execute in real-time. This new navigation paradigm will provide the operator with an increased sense of telepresence and situational awareness, leading to more accurate completion of tasks.

The goal of the VDE is to support rapid development of visual interfaces. Current tools support numerous visualization types, but are typically programming-intensive and challenging for novice programmers to use. This project will investigate interactive graphics techniques that reduce the programming burden on the user and even automatically suggest effective parameters for visual representations. The result will be a state-of-the-art, open-source library of aggregation, querying, and visualization tools, which will allow analysts to move smoothly between very high-level summaries and individual documents. VDE will integrate with the larger XDATA effort to produce an extensive open-source platform for analysis and visualization of big data.

ParaView Awarded HPCwire Editor’s Choice Award at SC12
As part of the 2012 International Conference for High Performance Computing, Networking, Storage, and Analysis (SC12), ParaView was selected as HPCwire’s Editors’ Choice Award for Best HPC Visualization Technology. This marked the third consecutive year that Kitware has been recognized by HPCwire, winning an Editors’ Choice award for the Visualization Toolkit (VTK) in 2011, and both Editors’ and Readers’ Choice awards for ParaView in 2010.

The HPCwire Editors’ Choice Awards are determined through a rigorous selection process, where winners are chosen by a panel of editorial and executive staff, recognized HPC dignitaries, and contributing editors from across the industry. Dr. Berk Geveci, Director of Scientific Computing at Kitware, accepted the award on behalf of the ParaView community, whose key sponsors include Sandia National Laboratories, Los Alamos National Laboratory, the Army Research Laboratory, and the National Nuclear Security Administration’s Advanced Simulation and Computing (ASC) Program. 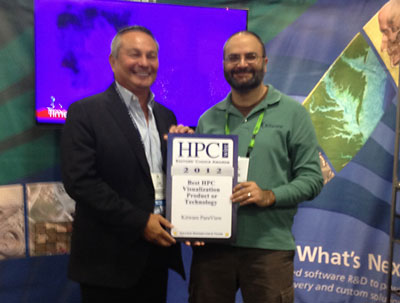 Kitware Attends Mil-OSS WG4
Kitwareans Luis Ibáñez and Chuck Atkins attended Mil-OSS WG4 meeting in Washington, D.C., where they presented the talk “Strategic Open Source: From Healthcare to Intelligence.” The talk focused on the difficulties and challenges within the healthcare and intelligence communities, and how leveraging open-source solutions can address these and benefit the community.

In addition to the talk, the event provided a great venue for discussions on how to facilitate open-source software within the government. In particular, discussions focused on aligning the agile culture of open-source communities with the more structured culture of government agencies, such as when dealing with Federal Acquisition Regulations (FAR), and satisfying Export Control (EC) requirements.

Kitware Makes an Impact at MICCAI 2012
Kitware had a very active presence at the 15th International Conference on Medical Image Computing and Computer Assisted Intervention (MICCAI) in October. As part of the event, Dr. Stephen Aylward, Kitware’s Senior Director of Operations in North Carolina, was elected to the MICCAI Society’s Board of Directors. Dr. Aylward has been an active conference contributor of workshops and tutorials, including the first workshop, “Open-Source Software for MICCAI” in 2005.

MICCAI also awarded the prestigious Young Scientist Award to the first authors of the top five papers at the conference, as voted on by an award committee from among the papers with the highest weighted review scores. Roland Kwitt, an R&D Engineer at Kitware, was awarded one of these Young Scientist Awards for his paper “Recognition in Ultrasound Videos: Where am I?” written in collaboration with Nuno Vasconcelos, Sharif Razzaque, and Stephen Aylward. The paper explores the use of ultrasound imaging as an inexpensive alternative to MRI and CT imaging for rural and developing parts of the world.

Ken Martin Named “CFO of the Year”
Kitware co-founder, Chairman and CFO, Dr. Ken Martin was named CFO of the Year by the Albany Business Review in October. Dr. Martin was selected from among 100 nominations in the small business category. During the awards ceremony, the Business Review noted Dr. Martin’s unique background in physics, computer science, and electrical and computer systems.

As CFO, Dr. Martin is responsible for the overall financial management of the company, its financial reporting and transparency, and for multiple corporate functions including contracting, compliance audit, legal, and long-range planning. Ken has monitored and steered the growth of Kitware without incurring debt or taking outside investments through careful management of the company’s assets and planning for future revenue and expenditures. In addition to these responsibilities, he remains an active software developer on projects such as CMake, on which he is one of the lead architects and core developers. 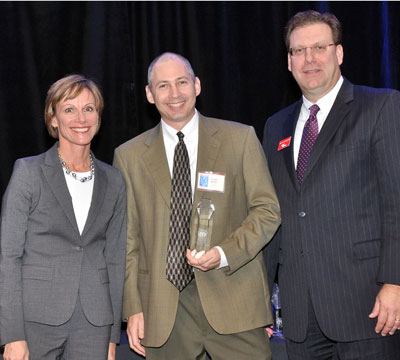 Exploring the “Tree of Life”
Kitware is one of the collaborators on “Arbor: Comparative Analysis Workflows for the Tree of Life,” a $2M project funded by the National Science Foundation.  The project will provide researchers and scientists with workflow-based visualization and analysis tools that will allow them to explore their vast quantities of data to quickly understand how organisms are interrelated and how they interact in geographical space and geological time. This new evolutionary-based research may help fuel future discoveries in the fields of medicine, public health, agriculture, ecology, and genetics.

Dr. Wesley Turner will be the principal liaison for Kitware, and will lead the integration of Arbor algorithms into an accessible, modular application; the development of effective data visualization methods; and the support necessary to nurture and grow an open-source community around the platform. The first version of Arbor is scheduled to be released later this year, with updates and expanded operations to follow over the course of the three years of funding. 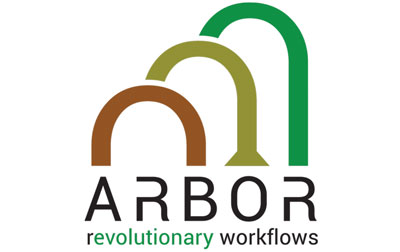 In collaboration with Michael Ryoo from the Jet Propulsion Laboratory at CIT, Anthony, Sangmin, and Arslan Basharat organized and presented the tutorial “Activity Recognition for Visual Surveillance,” which provided an overview of human activity recognition approaches and their applications to surveillance systems.

In addition to presenting tutorials and papers, Anthony was a session chair for the oral session on Action/Activity Recognition, as well as a panelist on the Industrial Panel with seven other senior members of the video surveillance research community.