Kitware Europe Celebrates 2nd Anniversary
November 8th marked the second anniversary of Kitware Europe in Lyon, France. Since its inception, the Lyon office has been actively providing professional training courses throughout Europe. They’ve also made important collaborations with organizations such as the French Nuclear Agency (CEA) to develop new tools for VTK and ParaView, and with IRCAD to develop mobile and online visualization tools that use VES and Midas.

Their success has led to the addition of new team members, upping the count to five. Looking to the future, Kitware Europe plans to expand their course offerings, and continue seeking consortium opportunities to contribute technical and open-source expertise for the advancement of science.

Kitware Attends Supercomputing 2012
Kitware attended, exhibited, and presented at SC12 in Salt Lake City, Utah in November. This was Kitware’s first year with an exhibit booth at the conference, and our team was able to interact with many of our HPC customers and
collaborators.

In addition to exhibiting, we presented two collaborative tutorials. The first, “Large Scale Visualization with ParaView” was presented by Kenneth Moreland, W. Alan Scott, and Nathan Fabian from Sandia National Laboratories, and Utkarsh Ayachit and Robert Maynard from Kitware; this tutorial featured guidance on visualizing the massive simulations run on today’s supercomputers, and introduced the audience to scripting and extending ParaView. 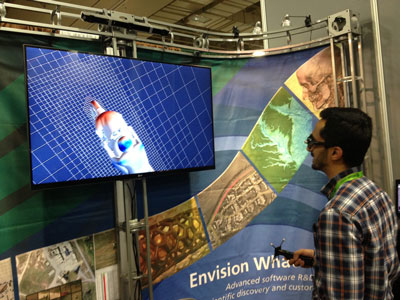 The second tutorial, “In-Situ Visualization with Catalyst” was led by Nathan D. Fabian and Ron A. Oldfield from Sandia National Laboratories; Andrew Bauer and Utkarsh Ayachit from Kitware; and Norbert Podhorszki from Oak Ridge National Laboratory.  This tutorial demonstrated two methods of performing in-situ visualization using Catalyst, ParaView’s co-processing library. Attendees learned various methods of applying Catalyst in their projects including how to build pipelines for Catalyst; how the API is structured; how to bind it to C, C++, Fortran, and Python; and how to build Catalyst for HPC architectures. 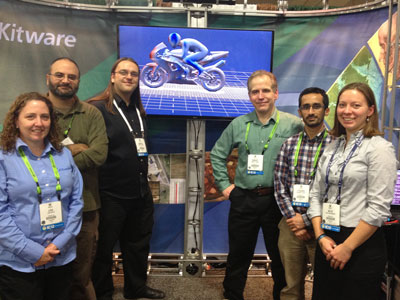 We’re looking forward to attending SC13 in Denver, Colorado, where we will be exhibiting in booth #4207.

ParaView for Climate Scientists Presented at AGU Fall Meeting
Aashish Chaudhary attended the 45th annual meeting of the American Geophysical Union in San Francisco, CA this December, where he presented “ParaView for Climate Scientists”. His talk described the integration of ParaView with the Ultrascale Visualization- Climate Data Analysis Tools (UV-CDAT) framework, a powerful and complete front-end to a rich set of visual-data exploration and analysis capabilities well suited for climate-data analysis problems. The integration leverages ParaView’s Python interface, and includes various new features that have been added to both tools to target climate data, including new readers, filters, and parallel spatiotemporal capabilities. 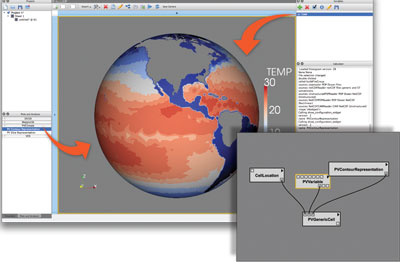 Marcus Hanwell Featured on Nature Soapbox Science Series
Marcus Hanwell, Technical Leader at Kitware was featured in a Soapbox Science series on Nature.com this Fall. His article, “PhDelta: The Road Less Travelled – From PhD to Software Development” discusses how his journey from  studying Experimental Physics in academia to becoming a software developer in industry was largely influenced by the ideals of Open Access publishing and open dissemination of scientific knowledge.

Dr. Hanwell leads the Open Chemistry project at Kitware, which includes the development of a suite of open-source tools to tackle big problems in chemistry, biochemistry, materials sciences, and other related areas.

Kitware Attends Geoint 2012
Kitwareans Anthony Hoogs, Matthew Turek, Lisa Avila, Katie Sharkey, and Katie Osterdahl attended the GEOINT Symposium in Orlando, Florida in October. This conference is put on by the U.S. Geospatial Alliance Foundation each year, and brings together the nation’s intelligence community. This year was Kitware’s first time attending and exhibiting at the event, and marked the debut of the Kitware booth. 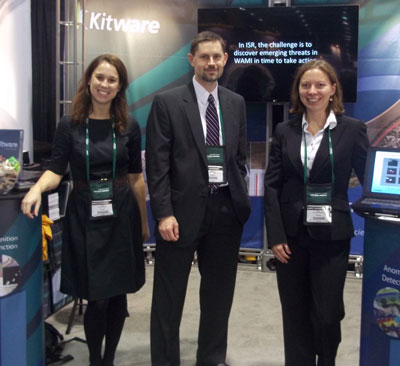 Over the course of the three day event, our team met with numerous industry officials and military personnel and discussed the Computer Vision team’s expertise in full motion video, wide area motion imagery, and activity and event detection.

Upcoming Conferences and Events
ParaView Course at the Finnish Supercomputing Center
January 15-17th in Espoo, Finland
Philippe Pébay will teach this two-day course at the CSC-IT Center for Science. The course provides a hands-on overview of the ParaView visualization application. The basic interactive visual exploration process is demonstrated, including data loading, data processing, adjusting parameters, and data interaction. Key concepts such as cutting, clipping, contouring, probing, and glyphing will be discussed, and examples of generating output in the form of processed data, rendered images, and animations will be
demonstrated.

International Symposium on Biomedical Imaging (ISBI) 2013
April 7-11th in San Francisco, CA
Stephen Aylward and Brad Davis are attending. Stephen is chairing the Grand Challenges with Bram van Ginneken from Radoud University Nijmegen. The ISBI Grand Challenges will be held on Thursday, April 11th, the last day of the conference.

Kitware Celebrates the New Year
At the end of every year, each Kitware location has a grand celebration. From our teams and families to yours, we wish you a very happy and productive New Year!

The Kitware celebration in Carrborro, NC.

The Kitware celebration in Lyon, France.

New Hires
Amir Sadoughi
Amir Sadoughi joined the Clifton Park, NY office as an intern on the medical team in December. He recently completed his Ph.D. in mechanical engineering at Rensselaer Polytechnic Institute in Troy, NY, for which he has been developing a new technique for studying monolayer behavior through acquisition and analysis of microscopy images.

Jake Stookey
Jake Stookey joined the Clifton Park, NY office as a Systems Administrator. He is experienced from having worked in a similar role at Rensselaer Polytechnic Institute. At RPI, Jake administered Linux servers for faculty, staff and students, maintained the network, and performed automated 24/7 monitoring, alert, and backup systems for all services. He holds a M.S. in Computer Systems Engineering.