ParaView 4.0.1 was released in mid-June, marking the first major change in version number since 2007. This release also marks a milestone in the gradual progression of the user interface and framework, and addresses more than 130 issues since the release of ParaView 3. ParaView 4.0.1 is based on VTK 6.0, and includes all related fixes and enhancements that went into that release. 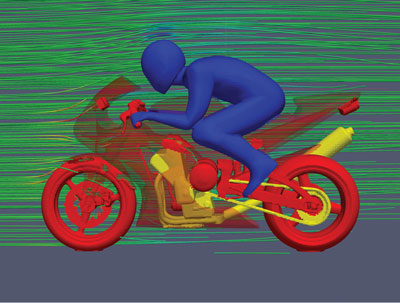 Major changes included in the ParaView 4.0.1 release were highly-requested on ParaView user voice – so thank you for making your voice heard, as well as for your contributions to this release!

It’s now easier to interact with multi-block datasets as it has been made easier to change display parameters such as visibility, color, and opacity. The Multi-Block Inspector enables users to specify such properties on a per-block basis. Block properties may also be changed from the context menu in the #d view. The Properties panel has also undergone some more changes in 4.0.1, including further cleanup, bug-fixes, and enhancements and the ability to group and create widgets based on their functionality.

A new feature included in this release is the ability to add mathematical markup to annotation text. ParaView can now support equation rendering support in the matplotlib package to generate mathematical equations in selected fields. To use this new feature, simply encase the applicable text in dollar signs: $….$; anything contained within these symbols will be treated as mathtext. Another often-requested feature that is now included in ParaView 4.0.1 is support for vector graphics. It’s now possible to export scenes from 3D views and charts, such as eps, pdf, or svg vector graphics. All text and annotations such as scalar bars, cube-axes, and curves in charts are exported as vector graphics, thus ensuring crisp reproduction for publications.

ParaViewWeb has been completely redesigned to use the latest HTML5 based technologies, such as WebSocket and WebGL. This enables communication with a ParaView server running on a remote visualization node or cluster using a lightweight JavaScript APT, which can makes it easy to embed interactive 3D visualization component.

Co-Processing support has undergone several usability improvements to enable users to build adapters externally, and the Python co-processing modules and scripts were cleaned up. More information on this update will be featured in the upcoming Catalyst/Co-Processing User’s Guide.

Lastly, major improvements have been made to the Color Legend. In addition to general updates, the scalar bar can now accept MathText for the title, subtitle, and annotation text; Greek letters and other math symbols can also be included in the legend.  This requires Python support with matplotlib available, which is included in the distributed binaries. Colormaps can also be marked to indicate whether their domains are ratio or interval-scaled, or categorical. Categorical colormaps are not shown as a continuous range of colors but as a discrete set of color swatches; text accompanying each value can be updated in the Annotations tab of the color legend editor.

As always, we appreciate and encourage your feedback. Stay tuned to the Kitware Blog for more details on Catalyst and ParaViewWeb, and for information on upcoming releases!