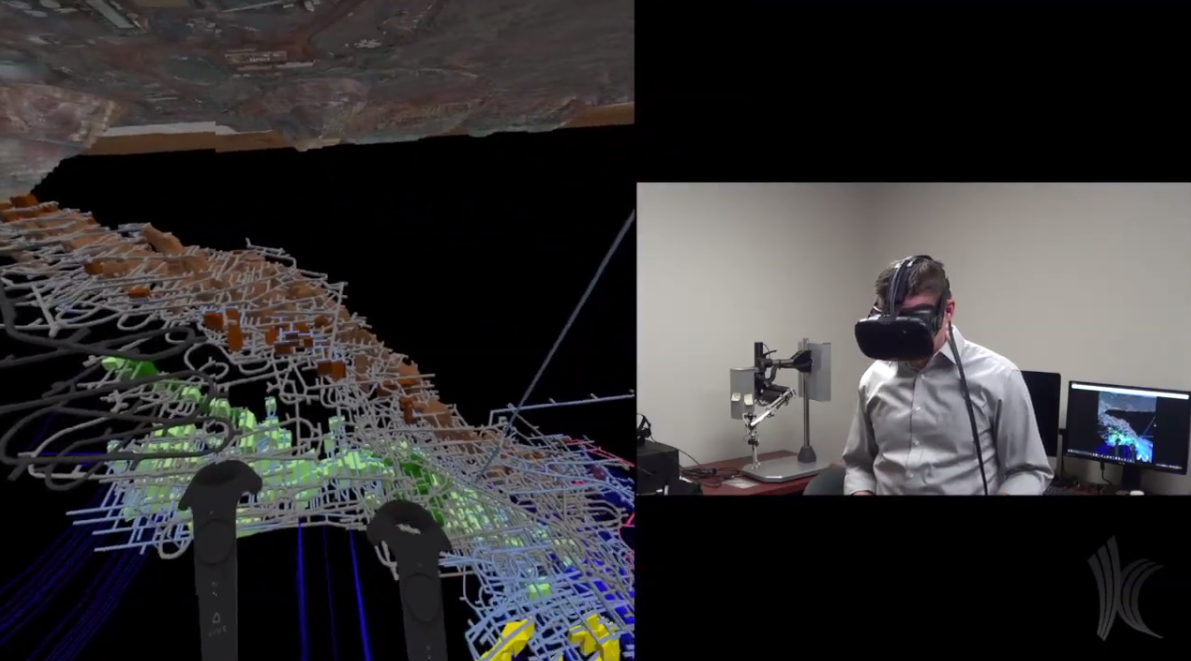 Kitware introduced two approaches at IEEE Virtual Reality (VR) 2017 that greatly simplify VR application development through the use of the Visualization Toolkit (VTK). The introduction occurred during the presentation of a paper that members of Kitware co-authored with researchers from Indiana University and Idaho National Laboratory.

“Previously, application developers took a significant amount of time to create scientific visualization VR applications, as they had to write their own algorithms and data-reading routines,” said Patrick O’Leary, a co-author on the paper and an assistant director of scientific computing at Kitware. “With VTK, developers can access ready-to-use algorithms through a convenient application programming interface.

“These algorithms not only save developers time, but they offer unmatched capabilities for rendering and interacting with data.”

In the paper, “Enhancements to VTK Enabling Scientific Visualization in Immersive Environments,” O’Leary and co-authors describe OpenGL context sharing and VR toolkit embedding. Respectively, these approaches allow developers to use VTK with consumer-level devices such as Oculus Rift and HTC Vive as well as with immersive environments including CAVE™ systems.

Kitware officially added VR support to VTK in version 7.1 with the integration of two modules. Along with VTK, the modules equip ParaView with VR functionality. ParaView is an open-source software solution that analyzes large datasets and employs VTK as its rendering engine. Kitware cited the inclusion of VR functionality in ParaView as one of the notable achievements that led to recent recognition. In February 2017, the company received the Software Innovation award from Albany Business Review, and in November 2016, Kitware accepted an award from HPCwire for Editor’s Choice: Best HPC Visualization Product or Technology on behalf of the ParaView development community.

“We aim to continue to extend VTK and ParaView to help developers explore data so that they can more easily make scientific discoveries,” O’Leary said.

Two of O’Leary’s co-authors on the IEEE VR 2017 paper, Sankhesh Jhaveri, a senior research and development engineer at Kitware, and William Sherman, a senior technical advisor and team lead at Indiana University, presented their work on VTK and ParaView during the Systems and Applications session at the conference. The session took place Wednesday, March 22, 2017, from 1:30 to 3 p.m. PST, in Los Angeles, California.

Less than three weeks after it celebrated its 19th anniversary, Kitware made transitions in team management and organizational structure to foster growth and to strengthen its position as a leader in open-source technical computing. The transitions took place at the company shareholders meeting on March 23, 2017.

At the meeting, Kitware named former Vice President of Commercial Operations Lisa Avila, Ph.D., as president and CEO. Avila co-founded Kitware in 1998. Throughout the last two decades, Avila has influenced every aspect of the business from technical development and project management to business development and communications.

“I am proud that our innovative open-source software has advanced scientific research, improved healthcare outcomes, and enhanced our national security,” Avila said. “I look forward to maintaining our commitment to our customers, collaborators, communities, and team members while fostering continued growth by expanding into new domains.”

Former President and CEO Will Schroeder, Ph.D., another Kitware co-founder, began a new role as opportunity catalyst. In this role, Schroeder will work across the company on mentorship, technical leadership, business development, and customer engagement. He will also continue to provide guidance in designing and implementing advanced algorithms for the many open-source platforms that Kitware develops.

“At Kitware, we produce software that scientists and engineers use to change the world every day,” Schroeder said. “We have grown significantly over the past two decades, building a vibrant culture with a collaborative focus that promotes technical excellence.”

At the shareholders meeting, Kitware co-founder and current Chief Technical Officer Bill Hoffman accepted the responsibilities of chairman of the board. As chairman, Hoffman will work closely with Avila to guide company growth.

Kitware appointed Claudine Hagen to succeed Kitware co-founder Ken Martin, Ph.D., as chief financial officer. Hagen joined the company as director of finance in January 2013. In this role, she led and coordinated business planning, accounting, financial reporting, and budgeting efforts. Prior to joining Kitware, Hagen spent 13 years in public accounting with KPMG, where she gained extensive experience partnering with senior management teams to develop business strategies and to optimize accounting and finance functions.

For his new title of distinguished engineer, Martin will direct technology initiatives that pertain to rendering, virtual reality, and data visualization. Kitware co-founder Charles Law, Ph.D., who performed the duties of vice president of strategic growth, also became a distinguished engineer. He will help introduce Kitware to new markets that closely align with its areas of expertise in high-performance computing (HPC) and visualization, data and analytics, medical imaging, computer vision, and quality software process.

Kitware reflected these and other transitions on its website. For inquiries related to Kitware, its leadership, and its technologies, please contact kitware(at)kitware(dot)com.

“VR provides a unique way for us to interact with our drilling data, geological models, and mine plans,” Godoy said. “The ability to visualize huge amounts of data at real-world scale enhances our abilities to recognize mineralization patterns and make better design decisions.”

“It has proven to be a powerful communication tool to showcase our operations and projects to investors, analysts, reporters, and Board members,” Godoy said.

The Visualization Toolkit (VTK), which provides the rendering engine for ParaView, will gain the enhanced functionality that Kitware worked with Newmont to produce in the 8.0 release cycle.

The research that Paniagua presented aims to help dental scientists characterize the type of structural changes that result in the mandible from orthognathic surgery. This research showcases an example application of shape regression that Kitware and team members plan to incorporate into an open-source software framework in a multi-year initiative. The initiative began in December 2016, when the National Institutes of Health awarded the team with a Research Project (R01) grant. Since this time, team members have worked to integrate existing shape analysis research code into the framework, which they named Slicer Shape AnaLysis Toolbox (SlicerSALT). Once completed, SlicerSALT will become available as a customized version of 3D Slicer.

“SlicerSALT will allow researchers who may not have expertise in shape analysis to evaluate the geometrical properties of different three-dimensional anatomical structures,” Paniagua said. “Our team’s results demonstrate the usability of SlicerSALT to characterize postsurgical conditions such as temporomandibular joint resorption.”

Paniagua presented during the 2:30 to 2:45 p.m. PST time slot. She also participated in the Using CBCT for Measuring Temporo-Mandibular Joint Changes and Tooth Movement workshop, which occurred Saturday, March 25, 2017, from 2 to 3:30 p.m. PST.

Kitware Hires Double Digits in 2017
So far this year, Kitware has recruited 20 new team members. The company has posted information on open opportunities at http://jobs.kitware.com/opportunities.html.

Wayne Durr
Durr took on the role of contracts administrator at the company headquarters. He holds an MBA.

Lucas Gandel
Gandel rejoined the team in Lyon, France, as an intern.

Xiaochuan (Matthew) Ma
Ma joined Kitware as an R&D engineer in data and analytics in February 2017.

Mmanu Chaturvedi
From Colorado State University, Chaturvedi came to the computer vision team as an intern.

Rachel Clipp
Clipp, whose many areas of expertise emphasize mechanical and biomedical engineering, started in Carrboro as a Staff R&D engineer.

Jeff Webb
Web commenced his role as an R&D engineer in March 2017. His work at Kitware relates to both medical computing and computer vision.

Aaron Bray
The medical computing team grew with the addition of Bray, who went to Auburn University.