Kitware hosted the second VTK hackathon on Tuesday, January 28th, at Kitware’s headquarters in Clifton Park, NY. The hackathon was a follow-up to last February’s very successful “dashathon” event in which the group successfully targeted persistent problems in the regression test suite. The topic of the second hackathon was to increase the test coverage metric, extending the test suite by writing new tests and removing or deprecating unused code to hunt for hidden problems in VTK’s million-plus line code base.

At this hackathon, three members of the developer community were honored for their contributions to the continued growth and success of the Visualization Toolkit. The timing of these awards coincides with VTK’s 20th anniversary, which also occurred in January. 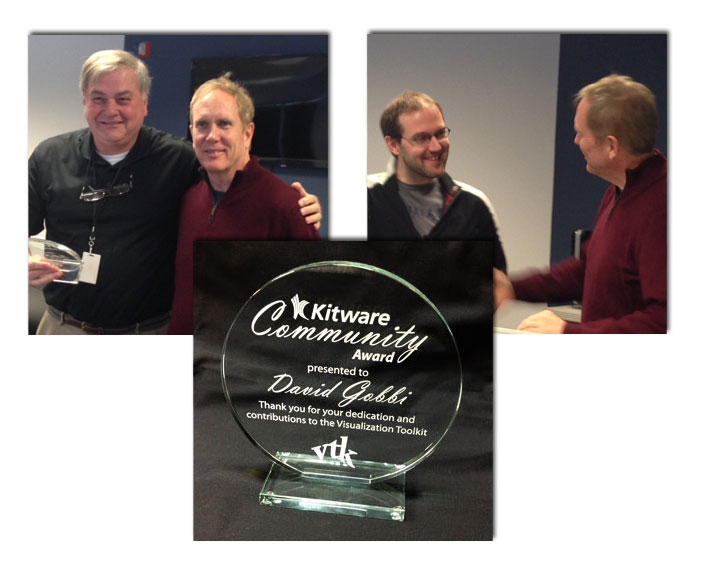 Bill Lorensen, who is one of the original authors of VTK, has greatly contributed to the development of the toolkit. His recent contributions include creating the VTK wiki examples project with David Doria, answering a diversity of questions on the mailing list, ensuring that VTK’s regression tests pass rigorous valgrind checks, and ensuring that new code contributed to the project conforms to the highest standard of quality.

David Gobbi has had an impact on VTK since 1998 when he contributed vtkImageReslice, VTK’s core image manipulation algorithm. Besides championing many of VTK’s image processing, rendering, and manipulation capabilities, his contributions include updating and extending VTK’s wrapping infrastructure by which VTK is made useable in the Tcl, Python, and Java languages; and playing a key role in VTK 6.0’s modularization effort.

Sean McBride has been contributing to VTK since 2007. While Sean has helped to maintain VTK’s FreeType text rendering interface, his impact is particularly important for Mac OSX users. VTK has worked well on Mac OSs from Leopard to Mavericks in part because of Sean’s efforts. Besides contributing code, Sean manages one third of VTK’s regression test machines and is well known for aggressively pursuing obscure compiler warnings and ensuring that VTK compiles cleanly on a wide variety of compilers.