Veloview ingests data from the HDL sensor, which sweeps an array of lasers 360 degrees at 10 hz and captures more than one million points per second. VeloView displays the laser measurements as point cloud data and supports custom color maps of multiple variables such as intensity-of-return, time, distance, azimuth, and laser id. VeloView also ships with a plugin that makes network and file readers available inside ParaView so that users may take advantage of the full range of visualization and data analysis capabilities in ParaView.

VeloView includes a Python scripting engine, which makes it easy to extend and customize. With the Python console in VeloView, users can access point cloud data and attribute arrays and use NumPy to perform advanced data analysis.

For more information or to get started with VeloView, visit the ParaView download page and set Type of Download to Community Contributed Applications. 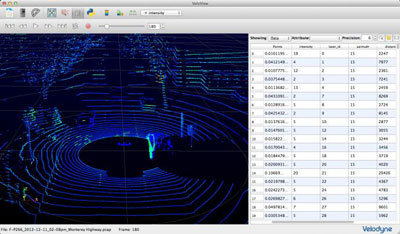 CMake 2.8.12 was released in October. The CMake development team would like to thank the CMake users who reported issues during the CMake 2.8.12 release cycle; your contributions are greatly appreciated.

The new commands in the 2.8.12 release improve the usability of CMake and make it more efficient for developers. The target_compile_options command allows developers to specify compile to use when compiling a given target. This command supports PUBLIC, PRIVATE, and INTERFACE options. Further, the add_compile_options command allows developers to add options to the compiler command line for sources in the current directory and below. Both of these new commands support generator expressions.

Kitware is pleased to announce the release of version 1.1 of Bender, with binaries available on Midas and source code under git version control.

Bender is an open-source toolkit based on 3D Slicer that provides algorithms and a user-friendly application for rigging, skinning, posing, and volume resampling, enabling researchers to interactively reposition an anatomic labelmap into a desired pose.

The 1.1 release features a number of enhancements, notably usability improvements. Algorithms perform faster and consume less memory, and some corner cases (for example when hands are in contact with the hips) are better handled. The workflow has been redesigned to be more streamlined, with the number of clicks greatly reduced. Upcoming developments to Bender will improve the anatomical repositioning by modeling tissue-specific deformation characteristics more precisely. For an introduction to Bender features, there is a tutorial with sample data available on the Bender wiki.