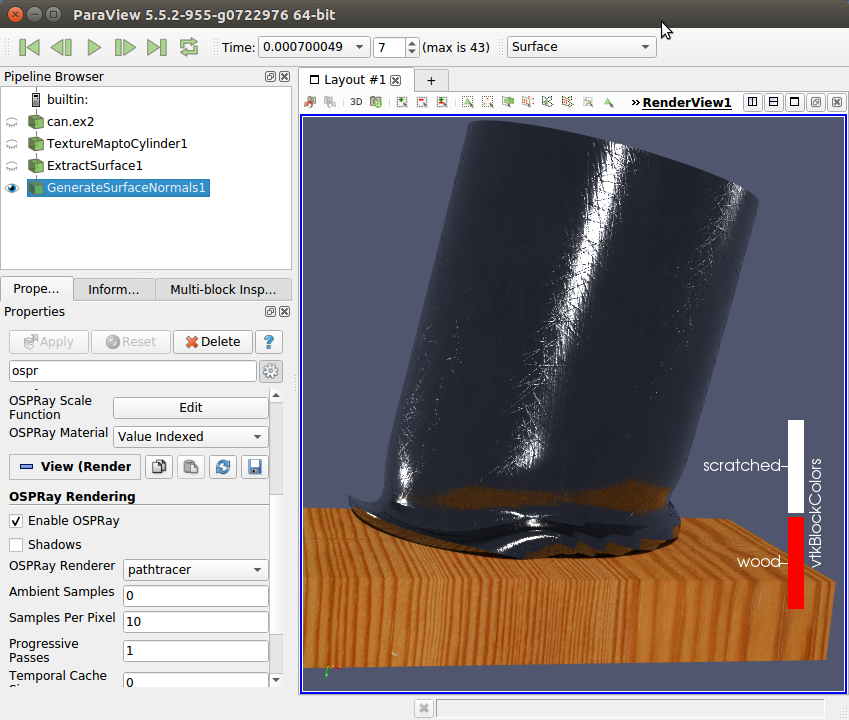 Major changes made since ParaView 5.5.2 are listed in this document. The full list of issues addressed by this release is available here.

ParaView community support has moved to http://discourse.paraview.org. The archives of the mailing lists paraview@paraview.org and paraview-developers@paraview.org will be preserved, but no new emails to these lists will be accepted.

Available under the General settings tab, the new Reset Display Empty View setting controls whether to reset the camera in a render view when showing a representation in a previously empty view.

Previously, ParaView always reset the camera in the view. The default setting value keeps it this way, but it is now possible to disable that behavior to preserve the camera view.

ParaView will now attempt to automatically initialize colors and annotations when the Interpret Values as Categories setting is enabled for a color map. It will determine the categories from the currently selected source in the Pipeline Browser. If unsuccessful, ParaView will report an error.

A control for setting the timeout to use when connecting to a server has been added to the Choose Server Configuration dialog. In Python, a timeout parameter has been added as an optional parameter to the different Connect methods.

Support for developing filters, readers, writers in Python and distributing them as plugins has been improved. paraview.util.vtkAlgorithm module provides decorators to expose VTKPythonAlgorithmBase-based VTK algorithms in ParaView. A Python module that provides such decorated algorithms can now be directly loaded in ParaView as plugins.

Several filters that involve Molecule data sets have been added:

The Glyph filter has been revised with more meaningful properties, and a streamlined user interface. Care has been taken to provide backwards compatibility for state files saved from and Python scripts developed for ParaView versions 4.2 and later.

The Ghost Cells Generator filter was fixed to work in non-MPI builds, and a bug for bad partitions was corrected.

The theory and the algorithm are described in Roxana Bujack and Hans Hagen: “Moment Invariants for Multi-Dimensional Data”

The Aggregate Dataset filter now works with image data, rectilinear grids, and structured grids whereas before it only worked with polydata and unstructured grids.

The Extract CTH Parts has been augmented with an option that enables extraction of CTH parts as 3D cells, not just 2D contours.

One caveat to these options is that all the points in a distributed data set need to be copied to a single rank to compute the oriented bounding box. When used in a parallel server setting, this may be slow or lead to memory exhaustion if the data set does not fit onto one rank.

The MooseXfemClip filter has been added as a plugin to aid in the visualization of results produced using the XFEM module in the MOOSE framework developed at Idaho National Laboratory.

The MOOSE XFEM implementation uses a phantom node approach to represent discontinuities in finite element solutions, which results in overlapping finite elements. The MooseXfemClip filter clips off the non-physical portions of the overlapping elements, allowing correct visualization of the discontinuous fields produced by this method.

The multiblock file reader now reports the available point, cell, and field attributes of the dataset, and supports selective loading of them based on user selection.

JSON description files for time series can now be written for these additional file formats:

The name of the series file must follow the format <filename>.<format>.series, e.g., images.vti.series. More information about the content of the file can be found here.

The Tecplot reader was improved to handle the ZONETYPE parameter.

ParaView includes a reader to read MotionFX CFG files that describe various types of motions on STL geometries. The reader can animate the geometries as described in the CFG file without having to re-read the geometry files on each timestep.

ParaView has a reader for visualization of high-order polynomial solutions in the Gmsh format.

The Wavefront OBJ reader retains OBJ groups as GroupIds for faces (similar to STL solid-labelling). This allows extraction of sub-geometries based on their group.

It is now possible to save PolyData meshes to the OBJ file format. The written files contain geometry including lines, triangles and polygons. If present, normals and texture coordinates on points are also written.

A CGNS Writer has been added that supports writing structured, unstructured and polygonal datasets, and multi-block datasets thereof.

Several of the vtkHyperTreeGrid filters were exposed, including:

To support use cases where one wants to develop a programmable source that is automatically refreshed periodically, we have added Live Programmable Source. With this source, one can provide a Python script for CheckNeedsUpdateScript that can indicate that the source may have new data and hence should be updated. The ParaView client application can periodically check such sources and update them, if needed.

Added a Python plugin that acts as a test data source for data sets with global temporal data made for testing the ParaView module “Plot Global Temporal Data”. The plugin creates a MultiBlockDataSet with a dummy uniform grid (vtkImageData). Multiple global data arrays are added based on provided input parameters

The size of the font in the Python Shell and Output Window now follow the Font Size setting under the General settings tab in the Settings dialog.

Favorites for filters are a set of custom menu items intended to provide fast access to often-used filters. The Favorites Manager enables creation and arranging bookmarks under an arbitrary number of levels of custom categories. Favorites are accessible under the Filters menu. In addition, the pipeline context menu contains an Add current filter menu item as a convenience.

New application settings Real Number Displayed Notation and Real Number Displayed Precision enable control of how real-number properties are displayed in the ParaView client user interface. These settings control how the property values are displayed, but the actual property values are stored in full precision. Regardless of the real number display settings, the full precision text is displayed when editing the property.

A new feature adds an Animation Time Notation setting offering the options Scientific, Fixed, or Mixed, and an Animation Time Precision controlling the number of significant digits displayed. The Time display is automatically updated when settings (precision or notation) change.

When the animation mode is set to Snap to timesteps in the Animation View, the available times in the Current Time Controls are available in a popup menu, so switching to a specific time is easier and faster.

Zoom in and out buttons in the Adjust Camera dialog box

The Adjust Camera dialog now includes buttons labeled “Zoom In” and “Zoom Out” for manipulating the camera zoom level. The zoom factor can be set to control how much zooming in or out is done.

Changes to the Choose Preset dialog

The Choose Preset dialog now has 16 default color maps and an advanced button that, when clicked, displays the full list. Limiting the number of color maps displayed by default aims to avoid presentation of an overwhelming number of colors in the full list and to encourage use of color maps with good perceptual properties. It is also possible to promote non-default color maps to default status by clicking the Show current preset in default mode checkbox on the right side of the dialog box. Read more….

The source generators in the Source menu have been organized into Annotation, Data Objects, Geometric Shapes, and Measurement Tools categories. All sources are available in the Alphabetical category.

Selection in the Point Gaussian representation

When creating a 2D plot of data and enabling log scaling on the left or right axis, a warning would appear if the plotted data had negative values explaining that the log of a negative value is undefined. ParaView now has an application setting to bypass the negative log axis warning by instead clipping the axis range to show only log-scaled positive values when log scaling is active.

zSpace devices are now configurable through a zSpace configuration file (.pvx). Examples of .pvx files are now located in the Examples/VR directory in the ParaView source directory. Additionally, camera angles have been synchronized between the Paraview client and zSpace screens.

Added a representation called Feature Edges to show the interesting edges of a data source, e.g., the cylindrical outline of a cylinder rather than the bounding box outline. Read more…

ParaView 5.6 updates its version of OSPRay to 1.6.1 and includes a number of OSPRay-related fixes and improvements. These include better memory management, more volume rendering controls and unstructured cell types, direct isosurface volume rendering, and new path tracer materials like the principled material as exemplified with the “scratched” sample material.

When volume representation is selected and Map Scalars and selected data array has 2 or 4 components, a new property called Multiple Components Mapping is available.

When this new feature is enabled:

Slice representation lighting is turned off

It is now possible to show min and max lines in Quartile Chart View in addition to the average and median curves when plotting summaries for a dataset or extracted selection over time.

Add a Shader Replacements property to the Geometry representation

This new property allows customization of the OpenGL shaders used for rendering by providing some replacement strings for the shader produced by VTK. The replacements are prescribed through a JSON string like this:

In the user interface, the property is represented with a custom widget that enables loading JSON from a file and saving its path as a preset. With this widget it is possible to select a preset replacements file, remove a preset from the list, and edit the content of the JSON string.

Fixed a bug found in the 5.5 release wherein fetching server configurations would silently fail and another where mac clients built with OSPRay (like the official release binaries produced by Kitware) could not connect to servers built without OSPRay.

Fixed an issue with the color map range getting automatically rescaled when it should not have been (this affected Catalyst as well).

The gradient calculation for the 3D Lagrange cells has been fixed.

A MPI4PY issue with SGI’s MPT MPI library has been resolved.

A bug with point selection and the Hover Points selection mode has been fixed for the Slice view.

The tooltip that appears when in Hover Points or Hover Cells selection mode is now placed correctly on the screen for systems with HiDPI displays.

Some changes were made to support building with Python 3.7.1. Note that 3.7.0 is known to not work.

Optionally use QWebEngine for help

There is a new streamlined process for defining and exporting Catalyst scripts. The Catalyst Export Inspector panel is the new place to define everything you want Catalyst to eventually export. Your choices are saveable in ParaView state files and match the normal user interface for exporting data files and screenshots. There are some new options too, including choices to export Cinema Spec D tables and to place all Catalyst output inside a specific directory. To export the Catalyst Script you’ve defined, use the new Export Catalyst Script option.

Both entry points are under the Catalyst menu. The original Export State wizard and Data Extract Writers controls are still there, too, but they are deprecated and will be removed soon.

The ParaView client now has a –live=<port> option to automatically connect to a Catalyst-enabled simulation that is expecting a Live connection.

The example Python script Examples/Catalyst/SampleScripts/filedriver.py has been added. It can be used with pvbatch to emulate running a Catalyst-enabled simulation by reading in files and running Catalyst Python scripts. The script is documented on how to use it.

Generated Catalyst scripts now have the option to: