SciPy 2014 In Review: Posters and Presentations

This post is the second part of our trip report on the SciPy 2014 conference. It covers the conference’s presentations and posters.  For an introduction and overview of tutorials, please see our previous blog post.

At the conference, there were different flavors of talks, which shared commonalities in that they were about science and computing with Python, were informative, and were interesting. The conference talks included inspirational keynotes on computational learning, adventures in CPython packaging, and software carpentry. There were also takes on fundamental concepts such as frequentism vs bayesianism and choosing the best colormap. In addition, solutions were proposed to interesting social problems, including enabling contributions with a dispatch architecture and improving computational literacy. Plus, exciting new projects were announced, such as airspeed velocity, zero dependency python, and jupyter.

Bradley Lowekamp presented the SimpleITK talk, which was co-authored by Luis Ibáñez and Matt McCormick. The talk was well received, and we had a number of great conversations with attendees who were not very familiar with ITK/SimpleITK, as well as with many who were simply happy to see our presence and support.

This year, we had two posters accepted to the conference. Jean-Christophe Fillion-Robin presented his poster on “Python cross-compilation and platform builds for HPC and scientific computing,” which describes a CMake configuration for CPython. 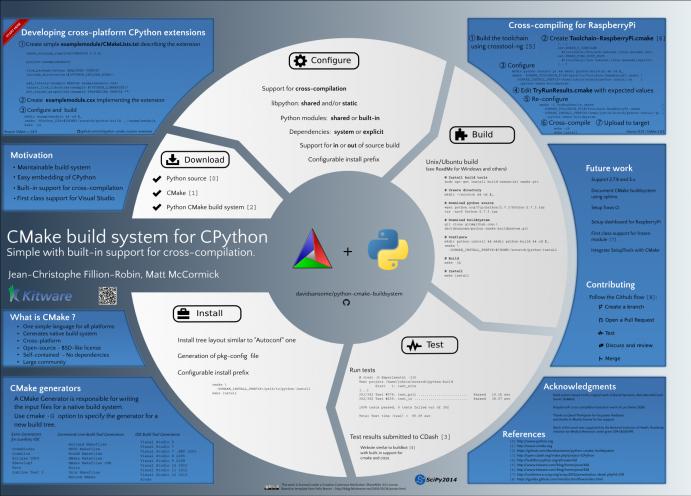 Comparative visualization over the Web for climate datasets accessed from ESGF