Upgrades to the Multiblock Inspector 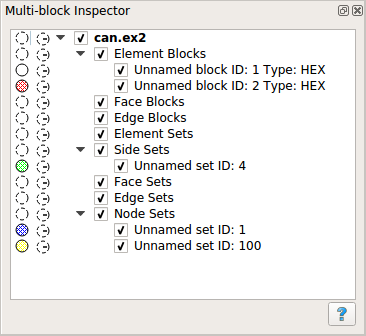 Multiblock Inspector, first added to ParaView in 2013, has undergone some cleanup for the upcoming 5.4 release. Let’s take a look and some of the highlights of this upgrade.

The requisite before and after pictures, to get us going:

While looks are not everything, it doesn’t hurt if the UI looks nicer. The new panel uses anti-aliased icons for color and opacity swatches. The swatches are placed on the right of the block names. This minor tweak makes it easier to use the  panel for deep trees or trees with very long labels. The old implementation had a problem with icons scrolling off to the right, when that happened.

Hover on any of the nodes in the tree and you are presented with tooltips with some useful details for that node.

Double-clicking on the color or opacity swatches allow you set set color or opacity for that subtree. Since these parameters get inherited down the subtree, the icons try to convey that information through border and fill patterns.

A handy legend pops up at the bottom of the widget on pressing the “?” button to help decipher the color and opacity patterns.

Feature wise, the new implementation has most if not all the features from the earlier implementation, including context menu to set/unset parameters, click-to-select blocks, and so on.