Velodyne Lidar and Kitware, Inc. announce the release of VeloView 1.0!

I’m excited to announce the release of VeloView 1.0!  VeloView is an open-source application designed for visualization and analysis of point cloud data generated by the Velodyne HDL lidar sensor.  VeloView is the result of a collaborative effort between Velodyne Lidar and Kitware, Inc. 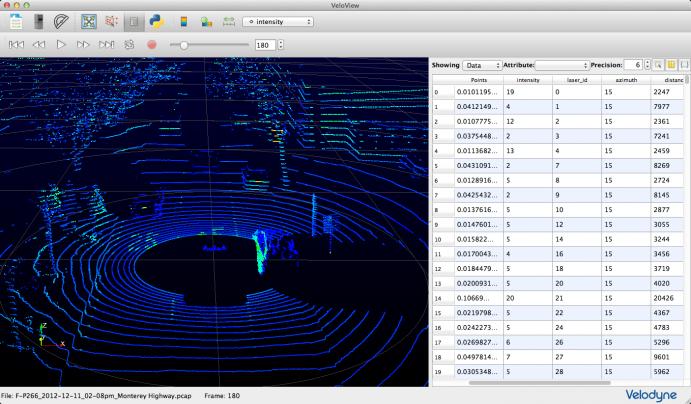 About the Velodyne HDL Sensor

The HDL sensor is famous for its origins in the DARPA Grand Challenge.  It was the lidar sensor selected by most teams that qualified and finished in the competition.  The HDL sensor is also used by the Google self-driving car, the Nokia True Car fleet, and many other applications.  A nice summary of Velodyne HDL uses can be found on the Velodyne Lidar news page.

VeloView performs real-time visualization of live captured lidar data from the HDL sensor, and it can playback pre-recorded data stored in files.  The HDL sensor sweeps an array of lasers 360 degrees at 10 hz and captures more than 1 million points per second.  VeloView displays the laser measurements as point cloud data and supports custom color maps of multiple variables such as intensity-of-return, time, distance, azimuth, and laser id.

VeloView is built on ParaView technology.  VeloView also ships with a plugin that makes network and file readers available inside ParaView so that users may take advantage of the full range of visualization and data analysis capabilities in ParaView.

VeloView includes a Python scripting engine.  In fact, most of the user interface is programmed using Python, so that makes it easy to extend and customize.  With the Python console in VeloView, users can access point cloud data and attribute arrays and use NumPy to perform advanced data analysis.  In the following snippet of Python code,  we access the intensity data of the point cloud using an numpy.ndarray, the maximum value is computed, and then we save the array as a data file.

1 comment to Velodyne Lidar and Kitware, Inc. announce the release of VeloView 1.0!