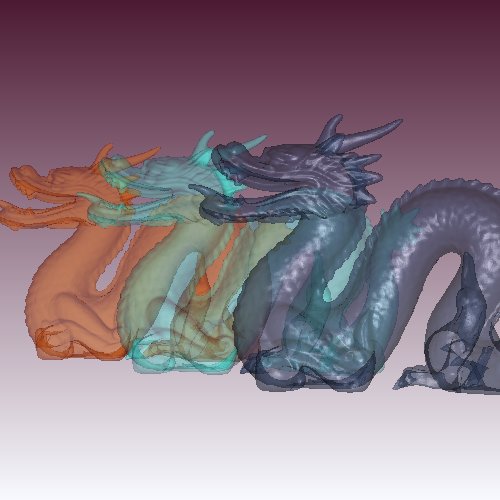 Visualization is the practice of discerning meaning from data. To aid this practice, the Visualization Toolkit (VTK) provides two sets of facilities. One set massages data into more useful formats (filters), and another set displays data (rendering techniques). The major focus of the VTK 7 series has been improved and expanded rendering. Let’s examine the improvements we’ve made so far.

Things started rolling in version 7.0 with the promotion of the previously experimental “OpenGL2” rendering backend to the default. The name is a misnomer, as it has nothing to do with OpenGL version 2. A more precise name would be “OpenGL>=3.2” because we replaced our fixed-function rendering calls with modern and much faster programmable-shader-style rendering calls. VTK is a big library that supports many features, so this was a more arduous task than it may appear. It took at least 773 commits (and counting) and touched hundreds of classes as well as tens of thousands of lines of code to get everything displayed as least as well as before. It was well worth doing, though. Our tests show that volume rendering is roughly two times faster and that surface rendering is roughly 100 times faster.

We’ve also been busy with several other rendering improvements. These include off-screen rendering with the EGL native platform interface; compatibility with the OpenSWR software rasterizer, which is optimized for Intel’s central processing units (CPUs); integration with the OSPRay ray tracer, which is similarly optimized; and support for the new commodity-class virtual reality systems like HTC Vive and Oculus Rift.

Now, let’s focus on a new dual depth peeling algorithm that we added to VTK. To begin, let’s look at depth peeling.

Translucency is tricky with a rasterizer. Without a guarantee of the order in which primitives are drawn, the naive approach of simply accumulating translucent triangles onto the screen will produce incorrect pictures, where distant objects appear to be in front of nearby ones. Sorting primitives by distance to the camera can help, but it is compute intensive, it must be done every frame, and it will not work in cases where groups of primitives self overlap.

Depth peeling is a technique for rendering translucent geometry correctly in a rasterizer like OpenGL. VTK’s first incarnation of depth peeling arrived in 2006. Back then, the required programmable shader features were somewhat rare, so the VTK code to enable and use them was necessarily convoluted. The code was widely used, however, and we strove to maintain and improve it over the years.

Over the series of passes, the image improves, and fewer and fewer pixels change.

Peel 1 draws the nearest sides of each dragon (left) onto the screen (right).

Peel 2 draws whatever is behind the nearest sides, i.e., the farthest sides.

Peel 3 draws whatever is next, behind the farthest sides.

After some number of passes (17 in this case), the algorithm exceeds the depth complexity of the scene. No more pixels will change, and we can terminate the algorithm.

Dual depth peeling is an improvement over the above. Essentially, at each pass, VTK’s dual depth peeling algorithm, vtkDualDepthPeelingPass, simultaneously peels layers of fragments from both the nearest and farthest sides of the scene. As such, the algorithm converges and terminates in approximately half the time. The algorithm was originally developed by NVIDIA in 2008.

The code in vtkDualDepthPeelingPass is somewhat complicated by the requirement to use a single blending specification while both peels’ color and depth information are computed and accumulated into separate render targets. The solution here is to use six input/output textures (BackPeel, BackAccum, FrontAccumIn, FrontAccumOut, MinMaxDepthIn, and MinMaxDepthOut) and MAX blending for all render targets. To implement this solution, we play some tricks. We negate values that we expect to decrease (such as the front peel’s alpha value), and we write to an empty texture and blend in a separate pass with the appropriate blend state values that we think may either increase or decrease (such as the back peel RGBA information).

The core code is as follows.

In Peel 1, the left shows the back peel, the middle shows the min/max depth buffer, and the right shows the accumulated front peel.

As in Peel 1, in Peel 2, the left shows the back peel, the middle shows the min/max depth buffer, and the right shows the accumulated front peel.

Once again, in Peel 3, the left shows the back peel, the middle shows the min/max depth buffer, and the right shows the accumulated front peel.

We end up with the same image as before. Since dual depth peeling extracts two peels with each geometry pass, however, it takes half the time. In this case, the algorithm converged to a correct image in only nine peeling passes (compared to 17 for traditional depth peeling), plus the overhead of a single pass to initialize depth buffers. In other words, the frame rate for correct rendering of translucent geometry nearly doubled.

In summary, we’ve made great strides in VTK’s rendering capabilities. The updated OpenGL rendering code is an improvement not only because it is faster, but also because the coding paradigm is more familiar to today’s OpenGL programmers and because the low-level OpenGL Shading Language code is easier to access. Overall, we can expect rendering improvements like the dual depth peeling implementation to come more frequently now, while VTK as a whole continues to move forward.

To learn more about dual depth peeling and the future of VTK, come see the Kitware booth (#3437) at The International Conference for High Performance Computing, Networking, Storage and Analysis (SC16). In addition to the booth, you can find us at other activities, such as a tutorial on “Large Scale Visualization with ParaView.” For the dates and times of these activities, please refer to the Kitware SC16 event listing.