Insight into Images with the Insight Toolkit

ITK witnessed a major milestone with the release of version 4.8.0. Now, ITK is more accessible to non-C++ programmers and more available on mobile, high-performance computing (HPC), and web-browser platforms. This major milestone was made possible through ITK’s large and active development community.

As a memento to those who contributed to the success of ITK 4.8 by adding to the Git logs (from ITK v4.7.0 to v4.8.0), the ITK Software Guide, the ITK Apps, or the ITK Sphinx Examples repositories, we sent 3D printed ITK cubes. 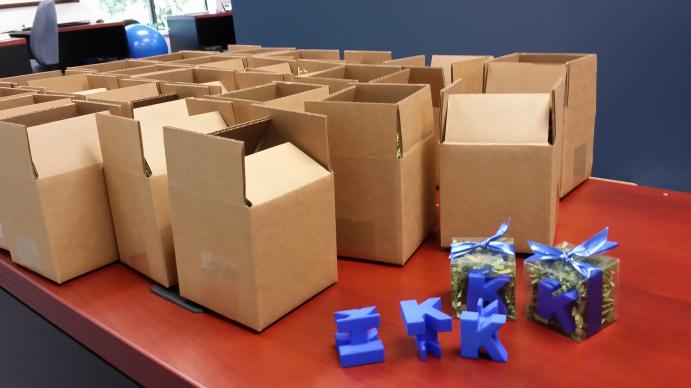 The cube was derived from code that generates a VTK cube and was written in 1998 by community members Bill Lorensen and Jim Miller. The model emulates an image on the cover page of the book Gödel, Escher, Bach: An Eternal Golden Braid (GEB) by Douglas Hofstadter.

GEB is a favorite tome of many in the community. As summarized by Wikipedia, it explores “common themes in the lives and works of logician Kurt Gödel, artist M. C. Escher, and composer Johann Sebastian Bach. GEB expounds concepts fundamental to mathematics, symmetry, and intelligence. Through illustration and analysis, the book discusses how self-reference and formal rules allow systems to acquire meaning despite being made of ‘meaningless’ elements. It also discusses what it means to communicate, how knowledge can be represented and stored, the methods and limitations of symbolic representation, and even the fundamental notion of ‘meaning’ itself.”

This model seemed appropriate for those furthering “Insight into Images” with the Insight Toolkit. The physical object is a fitting realization of the appreciation of efforts that often are hard to recognize in the form of ethereal transmissions of patches and electronic communication. 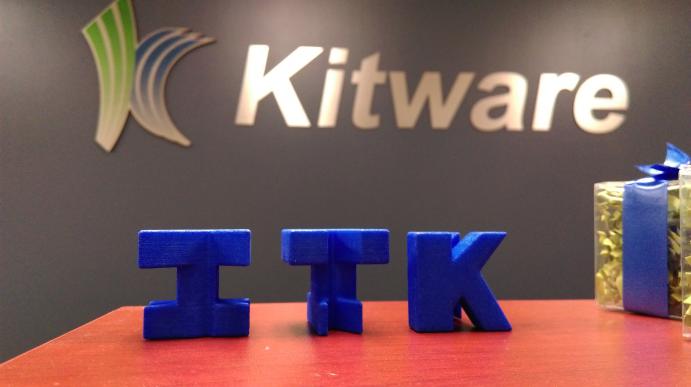 For the ITK 4.8 release, we chose blue as the color for the cubes, which were received by the following community members:

Thank you to everyone who contributed to ITK 4.8! 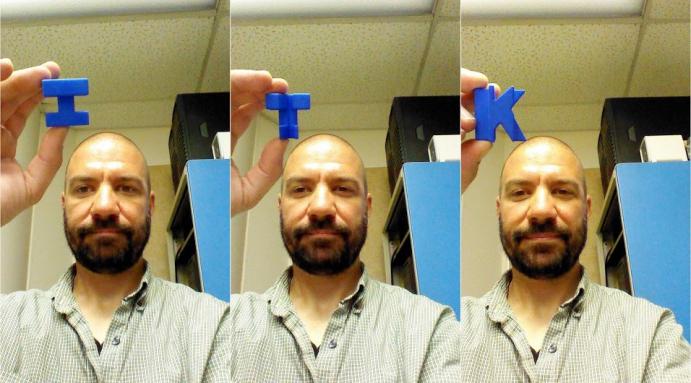 To contribute to the next release, please see the instructions in the ITK Software Guide. There are many ways to be an active member of the community. Davis Vigneault, for example, improved our ITK Software Guide documentation; Jon Haitz Legarreta improved testing code coverage; Michka Popoff improved the Python interface; Nick Tustison added new features; Sean McBride improved ITK’s compatibility with compilers and libraries; Arnaud Gelas improved the doxygen and examples; and Kevin Hobbs made Nightly software quality dashboard submissions. Currently, we could use help addressing our Coverity issues.

If there are questions or issues with the contribution process, please do not hesitate to discuss them on the mailing lists. We look forward to your contributions to ITK 4.9! 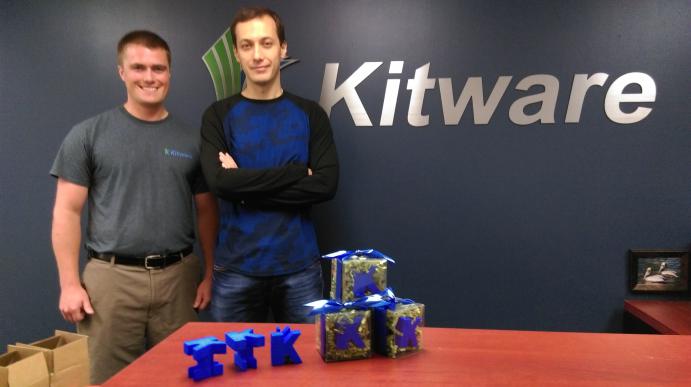 ITK is an open-source, cross-platform system that provides developers from around the world with an extensive suite of software tools for image analysis. Since development through extreme programming methodologies began in 1999, ITK has delivered leading-edge algorithms for processing multidimensional MRI, CT, ultrasound, PET, fluoroscopy, and microscopy data.

ITK began in 1999 with a contract for the development of an open-source registration and segmentation toolkit from the U.S. National Library of Medicine (NLM). Dr. Terry Yoo, the Project Manager at NLM, organized the six main contractors that comprised the Insight Software Consortium: GE Corporate R&D; Kitware, Inc.; MathSoft (now known as Insightful); the University of North Carolina (UNC); the University of Tennessee (UT); and the University of Pennsylvania (UPenn).

Dr. Yoo’s visions for the ITK project were to create a repository of fundamental algorithms that would form the basis of future research in the areas of medical image registration and segmentation and to grow a self-sustaining community around this toolkit. With around 50 active developers contributing over 48,000 commits and more than 1,700,000 lines of code, ITK has achieved these goals.

ITK’s funding comes predominantly from the U.S. National Library of Medicine and has been supplemented with funding from other Institutes from the National Institutes of Health, the NSF, the DoD (TATRC) program, and a variety of commercial development contracts.