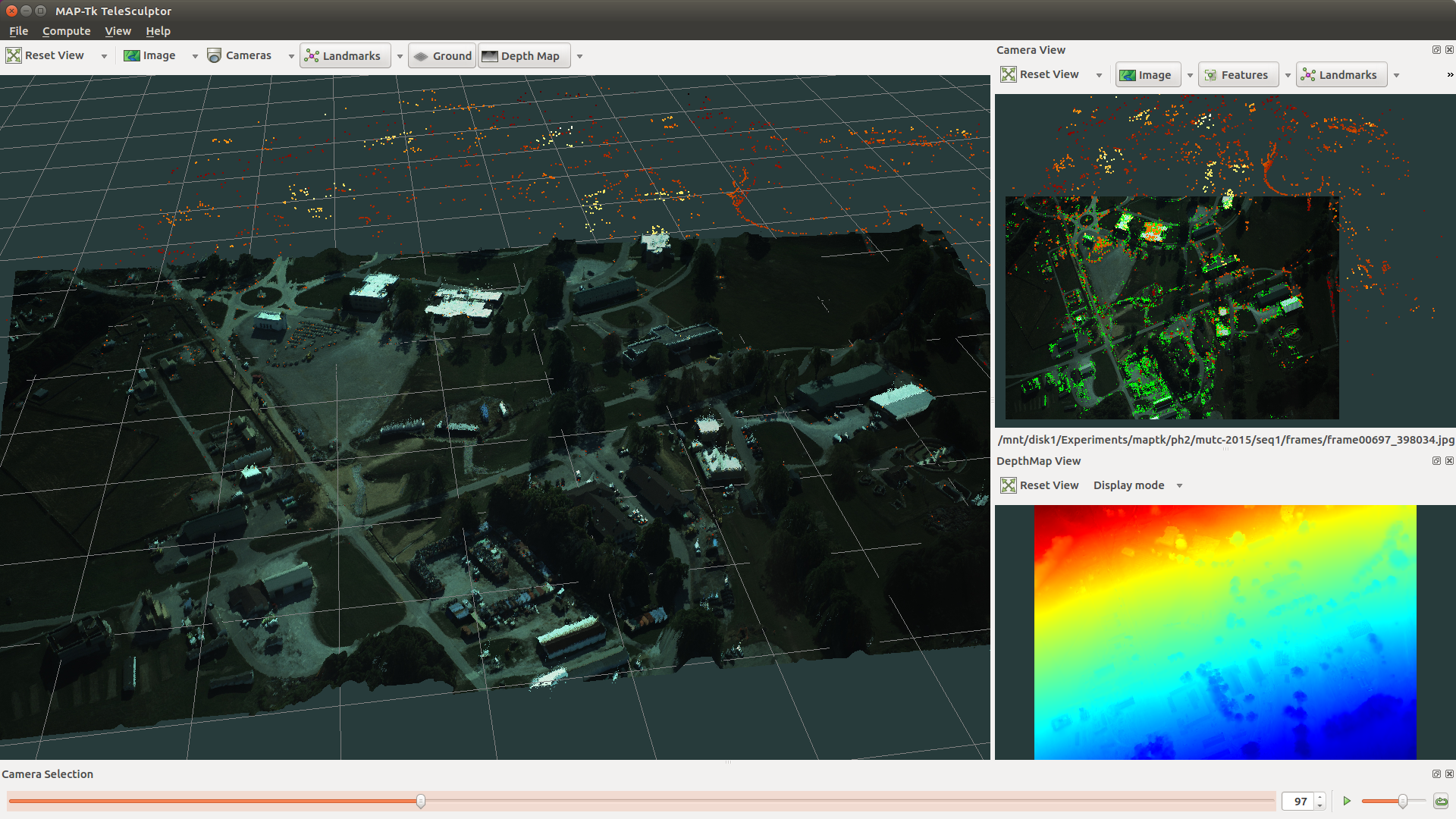 Kitware Maps Development of Toolkit for Image and Video Analysis

Kitware released version 1.1 of the Kitware Image and Video Exploitation and Retrieval (KWIVER) open-source toolkit before the 2017 IEEE Conference on Computer Vision and Pattern Recognition (CVPR). Members of the computer vision team at Kitware appeared at the CVPR industry exposition to accent this technology and others. They also presented research, recruited for employment opportunities and served as conference chairs. Senior Director of Computer Vision Anthony Hoogs served as a general chair, and Director of Computer Vision Matt Turek served as a corporate relations chair.

Kitware posted links to these papers on the company blog, as well as entries on KWIVER. Kitware made the introductory release of KWIVER this year in January. KWIVER is a repository of open-source software for image and video analysis that includes tools for video stabilization, object detection and tracking, bundle adjustment, camera calibration, three-dimensional data reconstruction, super-resolution imaging and content-based image retrieval.

The release of version 1.1 enhanced KWIVER for use cases in conducting video surveillance and processing underwater images, among others; matured the build process; revised documentation; and better coordinated how various pieces of the toolkit work together. The Motion-imagery Aerial Photogrammetry Toolkit (MAP-Tk) is one such piece. When Kitware first presented MAP-Tk at CVPR two years ago, it contained libraries of algorithms and structure-from-motion tools for video analysis. As MAP-Tk grew, its framework and core algorithms suited broader applications. To make them easier to reach, Kitware relocated these components inside KWIVER.

Kitware simultaneously turned the development of MAP-Tk toward specialized end-user tools. The primary tool, which the company now calls TeleSculptor, provides a graphical application for photogrammetry. In MAP-Tk 0.10, Kitware garnished TeleSculptor with support for carrying out a full structure-from-motion pipeline without receiving aid from command-line tools. Kitware released MAP-Tk 0.10 alongside KWIVER 1.1.

After previewing ParaView 5.4 in a series of blog posts, Kitware pushed the final version. Together, thirty developers added over 430 commits to the software.

“We revised the color legend with significant improvements in the choice and placement of graduations and annotations,” said Utkarsh Ayachit, a distinguished engineer and the lead developer of ParaView at Kitware.

“In the next release, ParaView 5.5, users can expect usability to continue to advance,” Ayachit said. “Specifically, the release will incorporate OSPRay path tracing for realistic lighting.”

Kitware passed another turning point for the Visualization Toolkit (VTK) with the release of version 8.0. The release became the first to benefit from C++11 compliant compilers. VTK now officially supports different aspects of C++11 such as default constructors, static assertion, non-static data members and enumeration declaration.

“The new features in C++11 allow developers to be more productive and eliminate common sources of bugs,” said Dave DeMarle, a principal engineer at Kitware and a developer of VTK.

“Now that VTK enforces the availability of a C++11 compiler, developers can rely on capabilities without maintaining awkward workarounds.”

For high-performance computing, the 8.0 release annexed the VTK-m framework of tools. These tools include new filters that process data. Kitware uploaded the filters to the Accelerators/Vtkm folder in the VTK repository.

Outside of VTK-m, the release merged algorithms that process points and geometries. One algorithm (vtkLagrangianParticleTracker) visualizes particles as they move through simulations, and another algorithm (vtkCookieCutter) precisely cuts a two-dimensional (2D) geometric surface with a separate 2D surface that acts as a stencil. Additional algorithms (vtkDensifyPointCloudFilter and vtkUnsignedDistance) operate on point clouds. The release also augmented existing algorithms in VTK. The algorithm for dual depth peeling, for example, developed the ability to render volumes.

In addition, the release added the QVTKOpenGLWidget class, which provides a robust integration of VTK and Qt 5. The release also improved the OpenVR module, which pairs data with Oculus Rift and HTC Vive.

“The transitions to Qt 5, C++11 and Python 3 give users, developers and packagers a great deal of capability and flexibility in VTK-enabled applications,” DeMarle said.

VTK is an open-source software platform that manipulates and displays two-, three- and four-dimensional data. The VTK download page contains files for version 8.0. For more points of the release, please read the Kitware blog. For assistance with VTK, please contact kitware(at)kitware(dot)com.

Version 4.12 of the Insight Segmentation and Registration Toolkit Centers on Python Packages

Kitware issued links to the 4.12 release of the Insight Segmentation and Registration Toolkit (ITK) on the ITK website. Python wheel packages served as a pillar of the release. With Python bindings, developers can use all ITK functions in Python.

“Accessible computational methods enable researchers to reproduce advanced algorithms and apply them to novel domains,” said Matthew McCormick, a principal engineer at Kitware and a developer of ITK. “Wheel packages can be quickly installed, and the Python programming language can be picked up without formal computer science training.”

Filters formed another cornerstone of the release. They furnished ITK with algorithms that improve the robustness and accuracy of image segmentation. The MorphologicalWatershed filter, for example, uses concepts from geophysics to section images. Two other filters calculate strain tensors on tissue. In May, McCormick wrote an article on these filters in the Insight Journal.

Filter maintenance allowed ITK to display histograms of measurements more rapidly and to model shapes through principal component analysis with less memory consumption. In addition, the 4.12 release established more support for Microsoft Visual Studio, Clang and the GNU Compiler Collection. Code coverage also climbed to surpass the record that version 4.11 set. Kitware summarized code coverage and other aspects of the 4.12 release on its blog.

While the material discussed here is part of a community effort, at Kitware, this material is based upon work funded, in whole, by a $241,323 award from the National Library of Medicine.

Kitware officially completed the release cycle for CMake 3.9, which developers can now download. CMake consumed more than 900 commits from around 80 members of the development community since the last release happened in April 2017.

Numerous commits sought to relax constraints that affect parallel compilation with the Ninja generator. The relaxed constraints improve build times. Other commits targeted object libraries, which CMake can now install, import and export. These commits signaled the first steps of an iterative process that strives to make object libraries first-class citizens in CMake.

The release of version 3.8 previously made the CUDA programming language a first-class citizen in CMake. For the release of version 3.9, the CUDA_PTX_COMPILATION target property qualified CUDA to support PTX files in CMake and ship them as part of an application or a developer package. With this property, developers can perform just-in-time compilations of CUDA projects. Also for CUDA, the Visual Studio generator deepened support. Kitware elaborated on these and other particulars of CMake 3.9 on its blog.