In 2013, Velodyne’s Director of Sales & Marketing, Wolfgang Juchmann, approached Kitware for help designing and developing a custom visualization and analysis application. Velodyne manufactures real-time, 3D LiDAR sensors that produce data streams on the order of a million data points per second from a multi-channel family of laser sensors (HDL-32E and HDL-64E).  The sensors capture a full 360° 3D scan up to 20 times per second.

What Velodyne needed was software capable of showing the vast amount of data in a 3D environment, as well as the ability to live stream data from a sensor to the application. The custom software needed to be straightforward so that a novice user could experience and understand the 3D sensor data quickly without going through the training required for a complicated software package.

As a leader in visualization and open-source technology, Kitware was a natural partner for this effort. By leveraging the open-source toolkits ParaView and VTK, Kitware was able to very rapidly deploy an initial version of the application,  VeloView.  Kitware followed an agile development philosophy that incrementally improved the initial version with constant dialogue between the two companies, ensuring that customer needs and priorities were continuously incorporated in the development process. 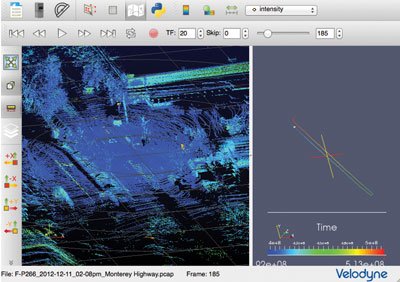 In the left panel VeloView overlays several consecutive 360° scans to visualize the 3D space around the vehicle.  The right panel shows the position and GPS path of the car.

As a sensor hardware manufacturer, Velodyne further recognized the benefit provided by open-source access to VeloView’s source code, as it enables application developers to minimize time to market iterations.

“We use VeloView as a sales tool, providing current and potential customers with ready-to-use software,” Juchmann said. “The live-streaming feature provides us with the opportunity to offer real-time demonstrations of the sensor’s capabilities during customer visits and at conferences and tradeshows, which are guaranteed to generate excited audiences.”

VeloView 2.0 was released in April. Key features of VeloView 2.0 include:
•    Input from live sensor stream or pre-recorded data
•    Visualization of LiDAR returns in 3D and time including 3D position and attribute data such as timestamp, azimuth, laser ID, etc.
•    A spreadsheet inspector for LiDAR attributes
•    The ability to record data from live sensor stream and export it in multiple formats
•    A distance measurement ruler tool
•    Visualization of GPS data in spreadsheet and map format
•    The ability to show multiple frames (one 360° rotation) of data simultaneously
•    The ability to show or hide a subset of laser channels

Wolfgang Juchmann is Director of Sales and Marketing at Velodyne LiDAR (www.velodynelidar.com). He is responsible for the business development of Velodyne’s HDL line of real-time 3D LiDAR sensors with applications in autonomous driving, mobile mapping, and security/defense. For more information, contact lidar@velodyne.com.

3 comments to Velodyne: A Case Study in Open-Source Solutions