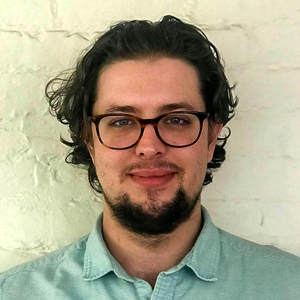 John Parent is an R&D engineer on Kitware’s Software Solutions Team located in Clifton Park, New York. He works with the team on a variety of software development projects, particularly working on a C++ -> Python automated binding tool and working toward maintaining the python binding for the Kitware Image and Video Exploitation and Retrieval (KWIVER) library.

Get to Know John

Open source was a big part of my undergraduate experience, and the model makes the most sense to me. Kitware is a major player in that community, and the work done by Kitware is interesting, cutting edge, and incredibly influential, as well as positively impactful to many. Additionally, the internal culture of the company is reflective of the highly collaborative nature of OS development.

That my work has an impact that I can see, the high levels of collaboration across teams, projects and individuals, and, most importantly, constantly learning. Working to solve complex problems and the lessons learned, whether from research or collaboration with a coworker, along that process.

I have an interest in robotics, hiking/general outdoor activities, and tinkering.