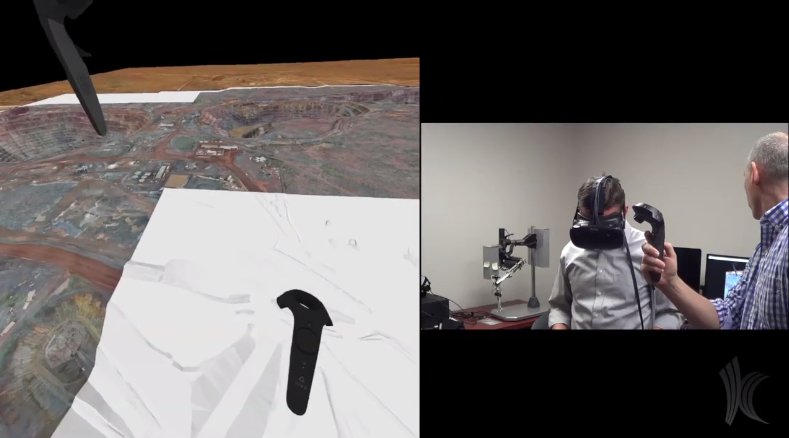 “VR provides a unique way for us to interact with our drilling data, geological models and mine plans,” Godoy said. “The ability to visualize huge amounts of data at real-world scale enhances our abilities to recognize mineralization patterns and make better design decisions.”

“It has proven to be a powerful communication tool to showcase our operations and projects to investors, analysts, reporters and Board members,” Godoy said.

The Visualization Toolkit (VTK), which provides the rendering engine for ParaView, will gain the enhanced functionality that Kitware worked with Newmont to produce in the 8.0 release cycle. For more information, please contact kitware(at)kitware(dot)com.

Kitware is an advanced technology, research and open-source solutions provider for research facilities, government institutions and corporations worldwide. Founded in 1998, Kitware specializes in research and development in the areas of HPC and visualization, medical imaging, computer vision, data and analytics and quality software process. Among its services, Kitware offers consulting and support for high-quality software solutions. Kitware is headquartered in Clifton Park, NY, with offices in Carrboro, NC; Santa Fe, NM; and Lyon, France. More information can be found on kitware.com.

Newmont is a leading gold and copper producer. The Company’s operations are primarily in the United States, Australia, Ghana, Peru and Suriname. Newmont is the only gold producer listed in the S&P 500 Index and was named the mining industry leader by the Dow Jones Sustainability World Index in 2015 and 2016. The Company is an industry leader in value creation, supported by its leading technical, environmental, social and safety performance. Newmont was founded in 1921 and has been publicly traded since 1925.