On Thursday, May 17th at 6:25 in the evening, 28 Kitware employees participated in the 2012 running and walking of the CDPHP Workforce Challenge, with approximately 9300 other participants from the Capitol District. This was the third year Kitware participated, and our best showing yet with only six participants in 2010 and about twenty in 2011. 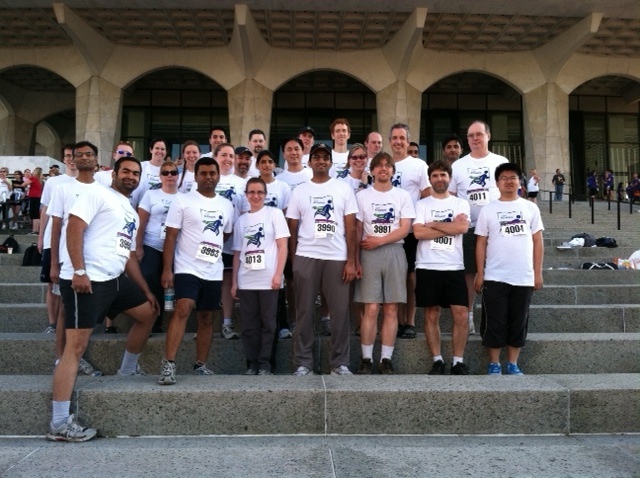 The weather was beautiful, with a temperature of roughly 60 degrees. Unlike last year, we weren’t threatened by thunderstorms and a muggy May evening. Note the great shirts, which Kitware provided to all the participants; don’t they (shirts and participants!) look sharp! Thanks Steve and Kitware!

The Workforce Challenge has been an event since 1980. The 3.5-mile course is run in downtown Albany and participation in the Capitol District has increased each of the last three years (which is when I started paying attention; I expect it has been steadily growing since its inception). Participants range from those that are quite serious about running (the fastest runner typically finishes at better than a 5 minute/mile pace, with the fastest time of 16:17 recorded 20 years ago) to those that enjoy the crowds and atmosphere at a comfortable walking pace. With 9000+ runners, joggers, and walkers “toeing the line,” there is a lot of excitement in the air. 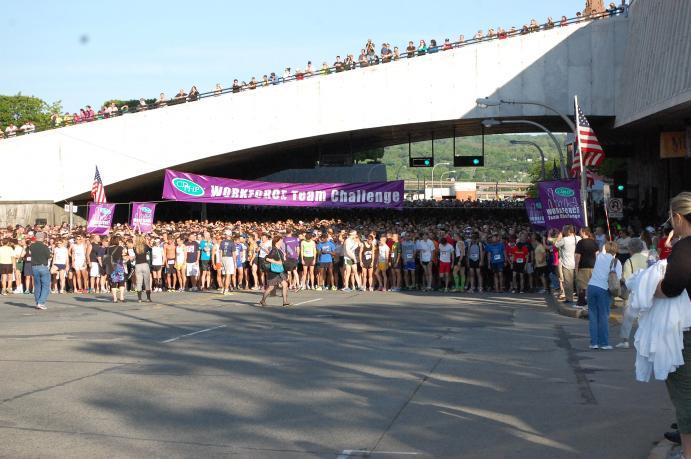 The event is mostly about getting active, but there is some friendly competition as well. Companies form teams of four runners each (either four men, four women, or a co-ed team of two men and two women). The teams can be (and usually are) specified post-race, with participants self reporting times to their team captain who then groups them together by time to form the fastest teams (there are no “chips” to confirm the times reported by those participating). I was slightly more prepared this year, grabbing pencil and paper after I finished so that I could record times as people finished; last year I waited 30 or so minutes until we’d returned to our team meeting area and then was rushed as I collected times and formed teams before the deadline to turn the “score” cards in. I think by next year I might finally know what I’m doing! 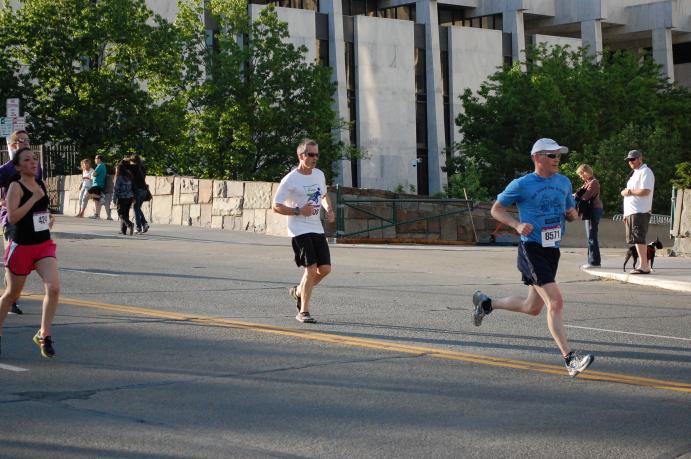 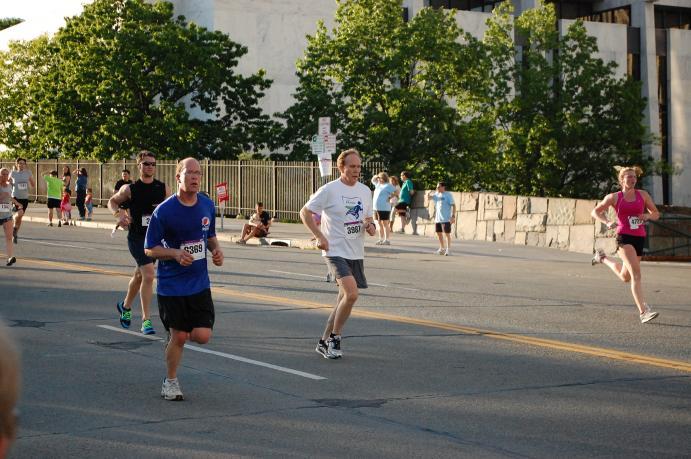 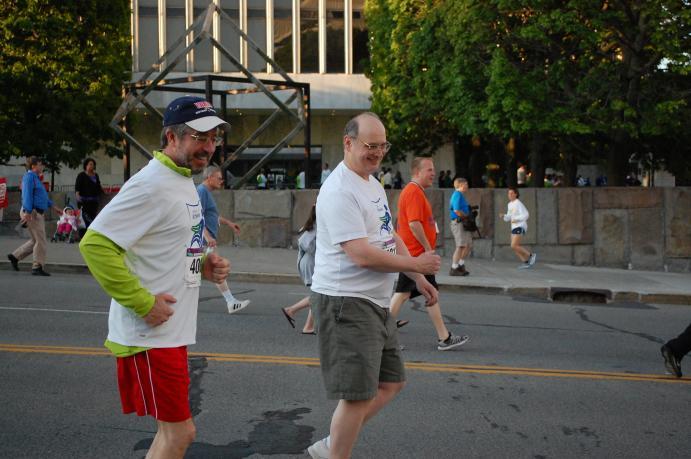 Kitware has a long way to go to be a serious contender (the fastest male team in 2012 was 1:14:26, while Kitware’s fastest 4 participants finished in a total time of 1:37:21), but we have improved significantly each year. This year our fastest team was 32nd fastest male team out of 225 other teams (last year we were 50th). The first four to cross the finish line were the same as last year though in a slightly different order; Rusty Blue (OK, that’s me), followed by Bill Hoffman, Matt Turek, and Will Schroeder. Each improved their time versus 2011, with Bill finishing nearly 3 minutes faster in a time of 23:10!!! While I’m a relatively average runner in the ranks of “serious runners” (I’ve been running regularly for most of my life, and have done more than 15 marathons), I do consider myself “reasonably fast” even though I have very limited race experience.  Bill’s time this year was faster than both my previous times in the Workforce Challenge.  Though I expect I’ll pass the honor of fastest Kitware HQ runner to Bill (or someone else) next year, I wasn’t quite ready to do so this year; thanks to the pitter-patter of Bill’s “shoes” slightly behind me, I improved my time by nearly a minute from last year, finishing in 22:51 (finally, after 3 years I beat my stretch goal of 23 minutes). And yes, I specified the Clifton Park office because I understand that we have some speedy Kitware employees that choose to work somewhere other than Clifton Park, NY. 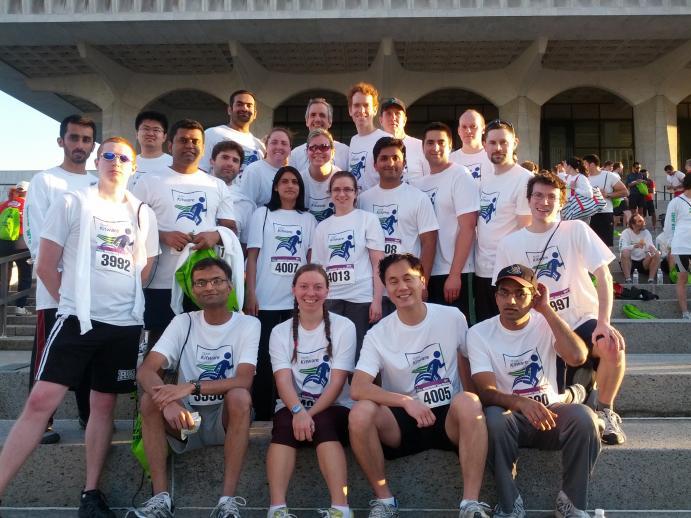 This year we entered 6 teams: 4 male teams, 1 female team, and 1 co-ed team (given the number of men and women we had, forming a 7th team wasn’t possible).

We had four male teams:

And one co-ed team:

Checkout the results at http://www.cdphpwtc.com and note that Will placed 9th this year among the CEOs (methodically working his way up the list)!

A special shout-out to Donna Kochis as the most excited participant; she was downright giddy in the days leading up to the event. She worked hard training for the event, and it paid off with an enjoyable run in Albany. Last I heard (walking to the cars post Workforce Challenge) she was talking about running a 5K in August as an encore.

I’d like to thank everyone for participating and look forward to another great turnout next year!

Need some inspiration to start running? 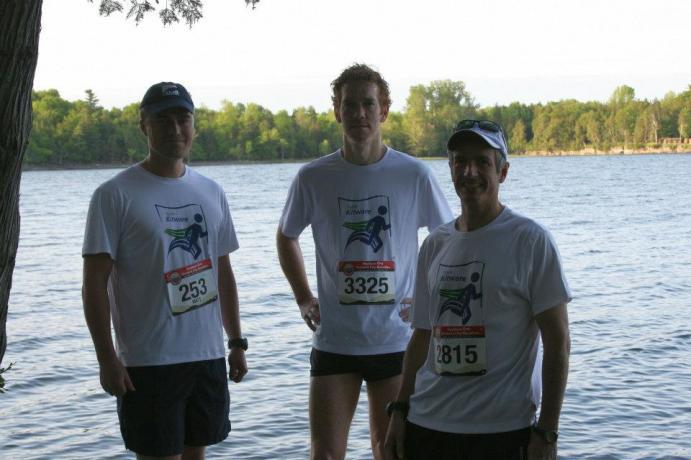 For those that don’t know, Bill has undergone an incredible running transformation after reading Born To Run (by Christopher McDougall) in the Fall of 2010; after not being able to run for roughly 30 years due to leg/knee pain when he tried running, Bill took up running in late 2010 wearing those (dare I say “funny looking”) Five Fingers “shoes.” He hasn’t stopped running since, competing in his first marathon last fall and then taking more than an hour off that time at the 2012 Memorial Day running of the Vermont City Marathon in Burlington, Vermont. Matt McCormick and I also ran; it should be noted that Bill finished almost 9 minutes ahead of me (as previously noted, I pretend to know what I’m doing)!!!