A VTK Selection Algorithm Based on Digital Topology

At the Direction des Applications Militaires Île-de-France (DIF) of the Commissariat à l’Energie Atomique (CEA), France, a domain-specific visualization tool based on VTK and a ParaView server has been developed. The goal of this article is to report on a novel, topology-based selection algorithm which was added to VTK 6 as part of this collaboration.

Digital Topology
Digital topology is a part of combinatorial topology which focuses on the neighborhood relation within a grid structure; specifically by “grid” we understand a conforming mesh in 2D or 3D. This is a slight extension of the standard definition of grid cell topology, which by definition studies the case of n-dimensional topological cubes, i.e., quadrilaterals in 2D and hexahedra in 3D. In our case, however, we accept hybrid meshes; i.e., meshes containing different types of elements (e.g., triangles and/or quadrangles in 2D, hexahedra and/or pyramids, tetrahedra, wedges, and knives in 3D).

It is beyond the scope of this short article to provide a full exposition of grid cell topology. It will instead suffice to gain an intuitive understanding thereof, by knowing that it is based for the rest of this article on the notions of 8-adjacency in 2D and 26-adjacency in 3D; two distinct grid cells are said to be separated by a Distance of 1 if and only if they share at least one topological entity (vertex, edge, or face). The Digital Distance between two grid cells is henceforth defined by counting the smallest number of successive such adjacencies needed to reach one cell from another one. The example below illustrates this intuitive definition, which is sufficient for our purpose of defining selection based on cell distance within a mesh. 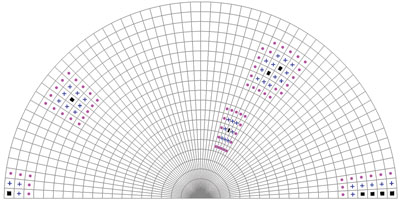 The figure above shows a hybrid mesh (containing both triangles and quadrilaterals) together with a number of “seed” cells, marked with black glyphs. Those cells that lie at Distance 1, in the sense of 8-adjacency, from any of these seed cells (excluding the latter when at Distance 1 from another seed) are marked with a blue cross. The same is done for a Distance of 2, with violet disk markings. This illustrates the notion of topology generated by 8-adjacency distance, which can readily be extended in the three-dimensional case, with the 26-adjacency distance.

Cell Distance Selector
A class for the selection of cells at a given 8- or 26-adjacency distance D from a given set of seed cells, within a composite data set, had been developed at CEA/DIF. In the context of this collaboration, we developed a new subclass of vtkSelectionAlgorithm, called vtkCellDistanceSelector, in order to port this functionality to the upcoming release of VTK 6. We preserved almost all of the original API, except for the choice of input ports, which we modified as follows to comply with typical VTK usage.

Input port 0: The input mesh, in the form of a vtkCompositeDataSet. In practice, the permitted leaf block types are vtkPolyData, vtkStructuredGrid and vtkUnstructuredGrid.

Input port 1: The input set of seed cells, in the form of a vtkSelection instance atop the above.

This change therefore does not preserve backwards compatibility for the CEA/DIF visualization application, but we mitigated this by providing input port connection convenience methods that make the indexing of ports transparent to the user. With these, it will thus be straightforward to modify the aforementioned application so that it will set the inputs correctly.

In addition, we modified the original method by allowing for the inclusion or exclusion of cells located at an intermediate digital distance between 0 and D, so a topological ball rather than a disk might be selected. This is done by the means of the AddIntermediate instance variable, which by default is set to 1. Note that the implementation already allowed for the inclusion or exclusion of the seed cells themselves, with the IncludeSeed instance variable which is also set to 1
by default.

Results 2D
We illustrate the method first with a set of 2D test cases, which allow for convenient representation of grid cell topology relationships within a mesh. For this purpose, we make use of the same mesh and seed cells as in the example above, from which we define four test cases by grouping the seed cells in four sets: isolated interior cell, corner cell, set of four ridge cells, and set of three interior cells, two of which are neighbors and the third is isolated. For instance, assuming that mesh points to an instance of a vtkMultiBlockDataSet, with a single leaf containing a vtkUnstructuredGrid meshing the domain of interest, a selection of the seed cells with ID 972 is created as follows:

With this selection, sel, defining the singleton to be used as the first seed cell set, we now initialize a cell distance selector with up to a Distance of 2 from the cell, simply as follows: 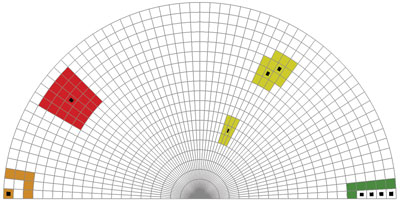 Executing the filter cds results in the creation of a new selection, which can further be extracted with the
vtkExtractSelectionFilter. Setting up the three other examples can be done in a similar fashion and is left to the reader as an exercise.

The picture above shows the four chosen sets of seed cells. The following four sub-mesh extractions are then performed from the output of the cell distance selector instances:

Red: The disk with Radius 2, centered at a unique seed cell deep within the interior of the mesh.

Green: The layer of all cells at Distance 1 (exactly) of the set of four contiguous ridge seed cells.

Orange: The layer of all cells at Distance 0 or 2 (but not 1) of a set of the isolated corner seed cell.

Yellow: The set comprising all cells within Distance at most 1 from the set of three non-contiguous seed cells.

The picture also shows the resulting sub-meshes extracted by the vtkExtractSelection filter from the output of vtkCellDistanceSelector for each of these four selections, using the same color encoding. Here we can readily see how this topological selection mechanism facilitates the extraction of sub-regions of interest with an intuitive and fast method of interaction.
These four test cases are used for non-regression testing, by the means of the TestCellDistanceSelector2D test program distributed with VTK 6.

Results in 3D
The test cases above are now extrapolated in 3D, with identical seed sell settings (isolated, connected, or non-connected sets thereof) and the same distance requirements: equal to 1, up to 2, exactly equal to 0 or 1, or up to 1.  The figure below illustrates these selections when applied to a 3D mesh. 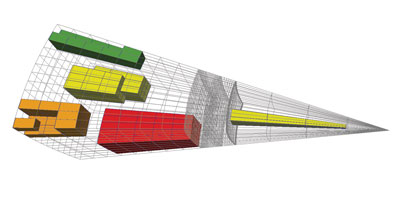 Specifically, the figure above shows a wireframe (light grey) representation of a 3D mesh and the following extracted selections, where the distance is now taken in the 26-adjacency sense:

Red: The ball with Radius 2, centered at a unique seed cell deep within the interior of the mesh.

Green: The layer of all cells at Distance 1 (exactly) of a set of four contiguous seed cells along a mesh ridge.

Orange:  The layer of all cells at Distance 0 or 2 (but not 1) of a set of a unique corner seed cell.

Yellow: The set comprising all cells within Distance at most 1 from a set of three non-contiguous seed cells.

These four test cases are also used for non-regression testing, by the means of the TestCellDistanceSelector3D test program distributed with VTK 6.

Conclusion and Future Work
A new, topology-based selection mechanism was added to VTK. This continues the expansion of the capabilities of VTK in terms of mesh manipulation and data analysis. Several continuation tasks can already be considered and proposed:

Similar to what has been done for the linear selector, it would be useful to have a widget allowing for convenient seed cell selection within a mesh. Coupled with the cell distance selector, such a widget would allow for interactive extraction of subsets of interest within a mesh that are in the vicinity or at a given distance of cells known to be of particular interest (e.g., corresponding to particular conditions within a simulation or with respect to the topology of the mesh).

Finally, it would be convenient to add other distance specification mechanisms, so that an arbitrary list of distances (akin to a binary mask) could be passed as input parameters to the selection algorithm. This would make the cell distance selector one step closer to a generic, topology-based sub-mesh extraction tool.

Acknowledgments
This work was made possible thanks to a contract with CEA, Direction des Applications Militaires Île-de-France (DIF), Bruyères-le-Châtel, 91297 Arpajon, France. We extend special thanks to Guénolé Harel, Thierry Carrard, and Claire Guilbaud, for this fruitful collaboration. We are looking forward to continued collaboration with CEA/DIF in this and other areas of scientific visualization.

Philippe Pébay is Technical Expert  in Visualization and HPC at Kitware SAS, the European subsidiary of the Kitware group. Pébay is currently one of the most active developers of VTK, an open-source, freely available software system for 3D computer graphics, image processing, visualization, and data analysis. He is in particular the main architect of the statistical analysis module of VTK and ParaView.