Announcing the Release of SMTK 21.05 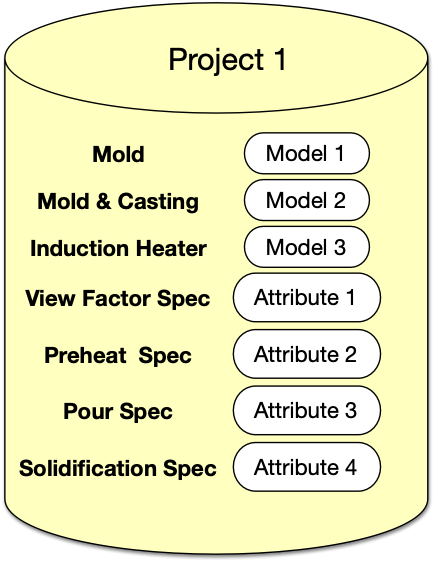 The major improvements under this release can be grouped into the following areas:

In previous non-project workflows, the user was responsible for loading all of the resources required to implement the workflow, and for explicitly saving those resources and tracking them on disk.

In the new design, SMTK Project is derived from Resource and consequently can be the input of a SMTK Operation. As in the case of other SMTK Resources, new classes of Projects, each with their own set of operations/behavior, can be defined and exposed to applications such as CMB’s ModelBuilder either via a plugin or by directly linking to the new library. New Project types can be created using C++ or Python.

The new Project design also introduces the concepts of roles. The role mechanism provides a more conceptual way of accessing a Project’s Resources. When an SMTK Resource is added to a project, it is assigned a role. Figure 1 shows an example of a Project for a casting workflow.

A getting-started tutorial using the new Project Feature can be found at https://smtk.readthedocs.io/en/latest/tutorials/create_a_project/index.html.

We have moved responsibility for creating pqSMTKResource proxies (which are ParaView pqPipelineSource subclasses) from consumers like the VisibilityBadge and operation panel to pqSMTKRenderResourceBehavior. This fixed an issue where duplicate pipelines were being created and, in general, is more consistent since it does not require the resource panel in order to cause new resources to appear. However, it changes some initialization since proxies will not have an SMTK resource assigned to them at the time many signals are emitted.

This change also adds storage to pqSMTKBehavior to avoid O(n2) computational complexity when many resource-proxies are added to a paraview/modelbuilder client.

The graph resource now provides a custom subclass of TypeMap named smtk::graph::ArcMap. This subclass deletes the copy and assignment constructors to prevent modifications to accidental copies of arcs rather than to the resource’s arc container.