Dr. Andinet Enquobahrie was co-host of the IGSTK Users Group Meeting that was held in conjunction with the conference.   Andinet presented on PET-CT support in IGSTK and users presented a diverse set of ongoing applications, clinical trials, and research algorithms.

IGSTK User Group Meeting
The fifth IGSTK Users Group meeting was held in Orlando, Florida in conjunction with the SPIE Medical Imaging conference. Each year the meeting is an opportunity for collaborators and users to gather and discuss their projects and use of IGSTK.

The morning of the meeting was dedicated to a series of presentations by core developers on new developments that were released as part of IGSTK 4.4. In the afternoon, IGSTK users presented their applications. This year the presentations covered image-guided head and neck surgery systems, a facet joint injection training simulator, and neurosurgery. 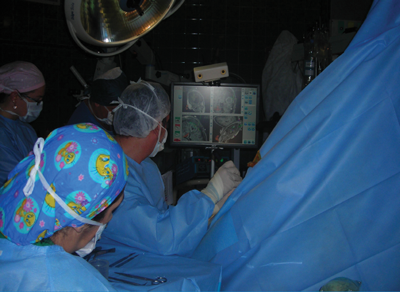 Procedure performed during a clincal trial of an image-guided neurosurgical
navigation system in Buenos Aires, Argentina

One of the highlights of the meeting was a presentation by Sebastian Ordas, who owns a small company in Buenos Aires, Argentina. He has a proprietary neurological image-guided navigation system developed using IGSTK. The system is currently under clinical trial and has been tested in 16 clinical cases thus far, including big and superficial tumor resection, tumor drainage, deep and small tumor resection, tumor biopsy and epilepsy. All the presentations were well done and the slides can be found on the IGSTK wiki at
http://public.kitware.com/IGSTKWIKI/.

CTK Hackfest
Kitware co-hosted the third annual CTK Hackfest from February 7-11 at the Franklin Hotel in Chapel Hill, NC. In preceding years, the event was held in Washington, DC and Barcelona, Spain, with a pre-Hackfest in Heidelberg, Germany. CTK, the Common Toolkit, provides a unified set of basic programming constructs that are useful for medical imaging applications development and facilitates the exchange and combination of code and data. The goal of the hackfest is to spend several days focusing on the most pressing challenges and collaborate to improve the toolkit. 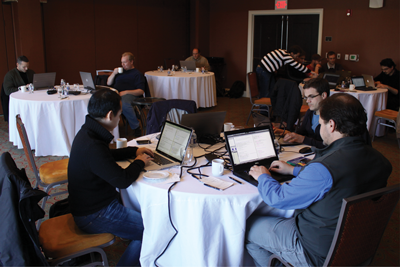 This year there were returning participants from leading research groups around the world, including the teams of MITK (Heidelberg,Germany), MAF (Bolona, Itality),  DreamTk (INRIA, France); Steve Pieper (Isomics, Boston) and Kitware attendees Dave Partyka, Jean-Christophe Fillion-Robin, Julien Finet and Stephen Aylward. In addition, this hackfest welcomed new participants including Lawrence Tarbox of the University of Washington St. Louis, an active participant in the DICOM Standards Committee and Nicholas Herlambang from AZE, Japan.

VIZBI 2011 Workshop
The VIZBI 2011 workshop was held March 16-18, 2011 at the Broad Institute in Cambridge, MA. The workshop was a review of the state-of-the art in biological visualization and highlighted current and future challenges in visualization across the broad range of biological research areas.  VIZBI takes a unique approach to the science and dissemination of biological information. It brings together biologists, geneticists, computer scientists and artists in an exploration of different ways to analyze and present unique information.  The Broad Institute is uniquely suited to hosting this type of intimate conference.

This was the second year of the workshop, which featured four keynote addresses, six scientific sessions and four poster sessions spanning a range of topics, from the genome, to proteins, cells, anatomy and on to populations and evolution.  Along the way the workshop addressed outreach, teaching and general visualization principles.  Following the workshop, the organizers held a set of tutorial sessions that combined instruction in various visualization tools with hands-on experience using those tools on the students’ own data.  Kitware was invited to present a tutorial, and Wesley Turner presented on the use of VTK and ParaView for medical and biological visualization.