Enhancements for 3D Slicer Funded by NIH
Kitware received grant funding from the U.S. National Center of Research Resources, part of the National Institutes of Health (NIH), to further develop 3D Slicer. Slicer is currently funded by grants associated with the National Alliance for Medical Image Computing (NA-MIC) and the Neuroimaging Analysis Center (NAC), and supported by extensive user and developer communities.

Dr. Stephen Aylward will be the Principal Investigator and Julien Finet will act as the lead architect and developer on this project. Together they will lead the collaboration between Kitware and the NIH-NCRR, Slicer, NA-MIC, and NAC communities to extend Slicer in three critical ways: with a simplified user interface, the implementation of fully-automated user interface testing, and the addition of SimpleITK access through Python.

The development of a simplified user interface will reduce the amount of training required for the most common tasks in Slicer. This effort will minimize the learning curve for end-users; simplify the development of extensions to the user interface for new algorithms; facilitate more frequent use of Slicer; and address time-consuming components to allow for more training time on advanced topics.

An automated user interface testing system will be achieved by adopting the GUI testing environment developed for ParaView.  The testing will be run nightly using CTest and CDash regression testing and reporting systems.  The nightly feedback will keep developers more informed about the overall quality of their software and the impact of their changes to the code. Additionally, the extensive collection of training material for Slicer will be automated as GUI tests.  Those automated interactions with Slicer will be used for online courses and demonstrations.

Slicer will also be integrated with SimpleITK, a simplified protocol language interface built on top of ITK to facilitate rapid prototyping, education, and interpreted languages. This will make 3D Slicer’s Python interface a fully-functional, script-based image analysis and display toolkit that provides access to VTK’s visualization API and the Qt GUI API.

In December, Sebastien Barre and Luis Ibáñez were honored with awards for their 10 years of dedication to Kitware, which speaks to their commitment not only to the company but also to the greater open-source community. 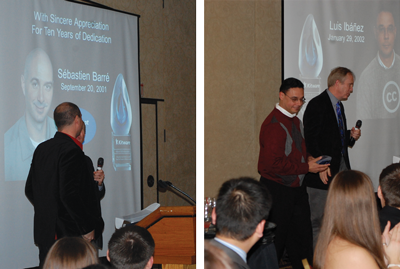 Sébastien Barré joined Kitware on September 1, 2001 after completing his Ph.D. in Computer Science from the University of Poitiers (France). Sébastien’s introduction to Kitware came through VTK as one of the first European contributors to the open-source project. Since joining Kitware, Sébastien has been an invaluable member of the medical imaging and software development teams, and recently has focused on user interface development. He is the primary architect of the company’s internal back-office software, KWiK, a critical component of the daily workflow at Kitware.

Luis Ibáñez joined Kitware on January 29, 2002 and is now a Technical Leader on the medical imaging team. Luis earned his D.E.A. and Ph.D. degrees from the Université de Rennes I in France, where he worked on the segmentation of bone structures. He is a staunch supporter of Open Science and Open Culture, and his enthusiasm and dedication have helped build Kitware’s reputation as an open-source company. As one of the principal developers of the Insight Toolkit, Luis focuses on community outreach and coordination, which are critical to the success of large-scale open-source projects.

As part NREL’s efforts to incorporate Radiance-based simulation capabilities within OpenStudio, Kitware helped the team integrate CMake into their build process. The use of CMake for Radiance will allow for nightly building and testing of the Radiance HEAD release and will provide automatic updates of any detected build or testing errors.

Additionally, Kitware contributed a new Qt-based GUI for the Radiance Scene Viewer that runs on Windows, Mac and Linux operating systems. Both of these contributions enable a wider scope of researchers to access and use Radiance, either on their own or through OpenStudio. With these new implementations, NREL is encouraging more developers and users to take part in the Radiance project and contribute their own systems to the dashboard in order to create a diverse testing environment. 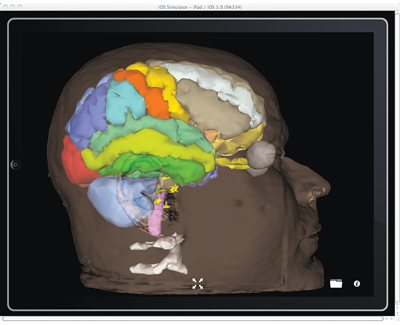 With the release of the source code, we are encouraging developers to get involved with the projects by downloading the source code, further extending or contributing to the software, submitting feedback or requesting new features through the VES UserVoice, and incorporating VES or KiwiViewer into their own projects. If you are a developer using VES or KiwiViewer for a project, we would love to hear about it and feature it on our website. We also encourage developers to send questions, bug reports, or feature requests to ves@public.kitware.com.

Open Chemistry Phase 2 Funding Awarded
In January, Kitware officially announced $730,000 in funding by the U.S. Army Engineering Research and Development Center (ERDC) for further development of a comprehensive, open-source computational chemistry workbench. Marcus Hanwell is the Principal Investigator, and will lead Kitware’s development of a suite of applications and libraries under the banner of Open Chemistry. Together the components will form an open, extensible application framework that puts computational tools, data, and domain-specific knowledge at the fingertips of chemists. The framework will leverage existing computational chemistry tools to perform calculations, while providing pre- and post-processing of data, information storage, indexing, and visualization.

These tools will empower chemists to work collaboratively and provide improved visualization, exploration of chemical structures and analysis of chemical data. Designed to be user-friendly, scalable, and network-aware, the applications will act as the central component in computational chemistry workflows. These features will also make Open Chemistry applications ideal for training future generations of chemists, as it will allow them to view, explore, and interact with chemical data in ways that are not yet possible.

See the rest of Kitware News in Part II.