An open source development environment is preferred by many developers because of its powerful and effective tools. Additionally, it is desireable to avoid the expense of compiler licenses, proprietary operating systems, and hardware when possible. In the age of cloud-based testing and deployment, the ability to work from an open source, Linux stack means services like Travis-CI, etc can be leveraged.

In this post, we will walk through the steps to build and test C/C++-based code (ITK) for Windows from Linux or Mac OSX. This requires current ITK Git master, to be released in 4.8.0, and current CMake Git master, to be released in 3.3.0. By the end of the post, we will be able to easily build and test Windows executables from a completely open source stack.

The MXE project provides access to the GCC-based MinGW compiler for Windows. It even includes a CMake toolchain file, the configuration file that tells CMake all the information it needs to know about a cross-compiler. First, clone the MXE repository:

Next, make sure we have all the build dependencies for MXE. A typical Linux development system will already have the dependencies installed. Some dependencies may need to be installed on OSX. On Debian, for example:

After the dependencies are installed, optionally tell MXE what we want to build by default and how we want to build it. This is specified with options in a settings.mk file. We instruct MXE to build a compiler for both 32-bit and 64-bit Windows. To build faster, we can set the number of parallel jobs to the number of cores on our build host. Lastly, MXE can cross-compile a number of packages, but we will just build the cross-compiler itself by default:

We will use an emulator to find information about the target system and test our executables. Even though the WINE project's name stands for Wine is Not an Emulator, we can utilize this fantastic, mature tool to emulate Windows. Install it on Debian with:

To build and test ITK for 32-bit Windows:

The CMAKE_TOOLCHAIN_FILE variable tells CMake about the cross-compiler toolchain we want to use. The CMAKE_CROSSCOMPILING_EMULATOR variables tells CMake what command can be used to emulate the target system. The ctest command will build and test our software and upload the results to CDash so we can visualize the results. 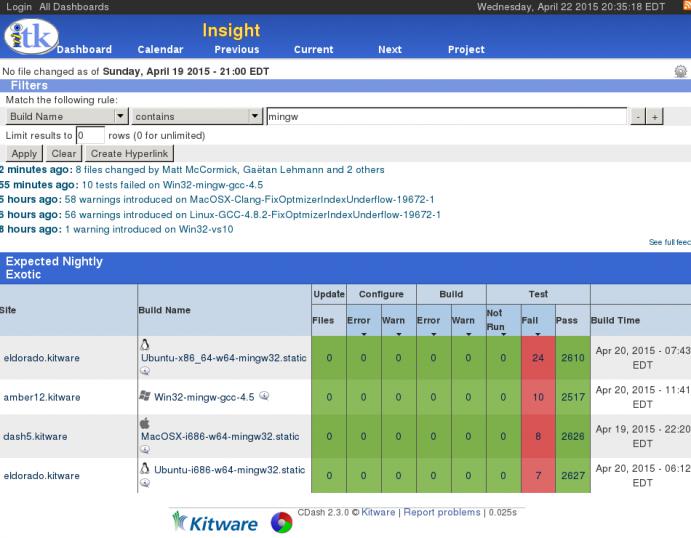 CDash provides an overview of build errors, warnings, and which tests are passing and failing. Here we see that most tests pass with a few more failing when built for Windows 64.

In this post we went through the steps to develop for 32-bit or 64-bit Windows from an x86_64 Linux host. We demonstrated how both build executables and obtain testing results by only specifying two variables in our CMake configuration, CMAKE_TOOLCHAIN_FILE and CMAKE_CROSSCOMPILING_EMULATOR. The reliability of these testing results depend on the quality of the target system emulator, but the presence of testing results on a dashboard is a big step towards better cross-compilation development.

In upcoming posts, we'll show how to use the same system to develop ITK-based applications for targets like Javascript for the web browser or NodeJS and Android.