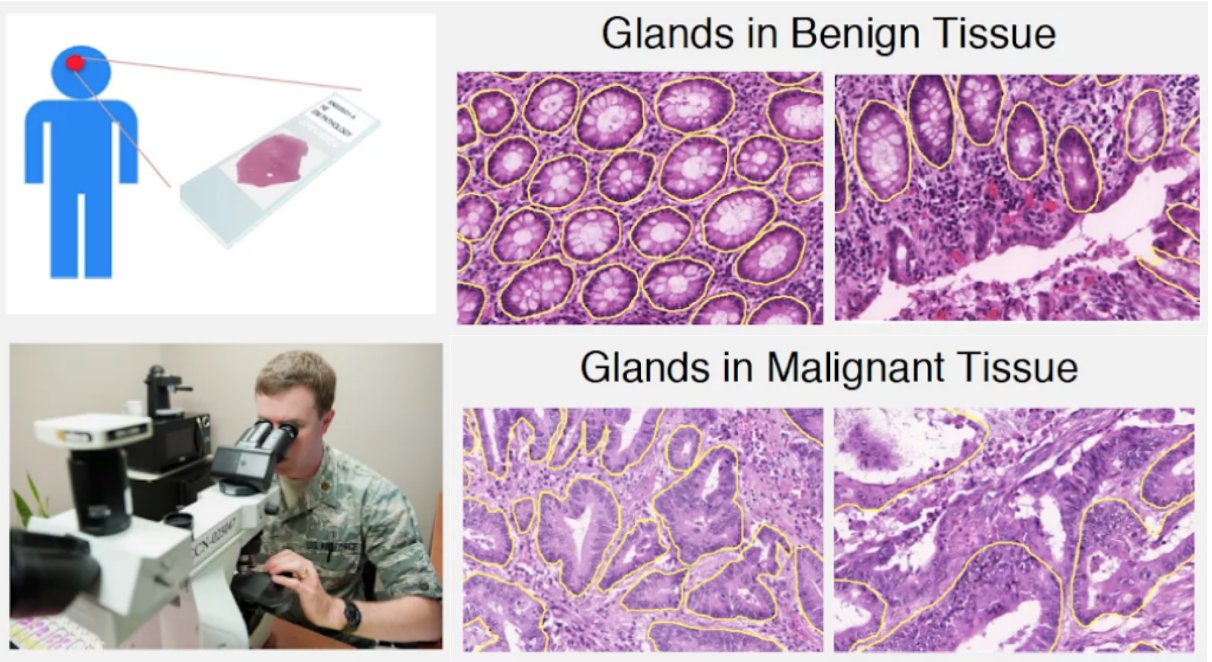 Differentiability and topological characteristics of the glandular structures is one of the key factors in the diagnosis and grading of adenocarcinomas through histology images. We believe persistent homology is an excellent mathematical tool to quantify these characteristics. In this blog post, we present a deep learning approach for encoding the glandular epithelium architecture based on a recently developed vectorized persistent homology representation called persistence images and demonstrate its application to automated diagnosis of colorectal adenocarcinomas with very encouraging results.

Histopathology is the study of the presence, extent, and progression of a disease through microscopic examination of thin sections of biopsied tissue. These sections are chemically processed, fixed onto glass slides, and dyed with one or more stains to highlight different cellular/tissue components (e.g., cell nuclei, cell membrane, cytoplasm) and antigens/proteins (e.g., Ki-67 indicating cell proliferation). Histologic evaluation is regarded as the gold standard in the clinical diagnosis and grading of several diseases, including most types of cancer.

In clinical practice, histologic evaluation still largely depends on manual assessment of glass slides by a pathologist with a microscope. Improvements in whole-slide imaging devices and subsequent regulatory approval of whole-slide-imaging and computational algorithms, however, are rapidly paving the way for increased clinical use of digital imaging and computational interpretation. Algorithmic evaluation of tissue specimens may eventually improve the efficiency, objectivity, reproducibility, and accuracy of the diagnostic process.

One of the main challenges in automating the interpretation of histopathology images is the recognition of complex, high-level semantics to identify the presence and degree of malignancy. Recently, deep learning techniques have achieved state-of-the-art performance in several such complex visual recognition tasks in both general computer vision and medical imaging data. In contrast to traditional machine learning models, whose success relies heavily on consulting with domain experts and carefully hand-crafting discriminative features of relevance to the clinical problem, deep learning techniques are capable of automatically learning these features from the raw image data.

However, the success of deep learning models relies on the availability of a large amount of training data, which is difficult to obtain in medical domains. While techniques such as transfer learning and data augmentation can address this problem to an extent, they are not always sufficient. In such a scenario, we believe that figuring out mechanisms to incorporate domain knowledge about the clinical problem in a way that is amenable to the application of deep learning models could be helpful.

For adenocarcinomas (tumors originating in glandular structures of epithelial tissue such as prostate, pancreatic, and colorectal cancers), the differentiability of glandular architecture in histopathology images is one of the key criteria used by pathologists to determine the presence and degree of malignancy (Figure 1). Normal-appearing structures with organized epithelium become disorganized with the unchecked growth and aberrant signaling typical of cancer.

We believe persistent homology is an excellent mathematical tool to quantify such complex characteristics about the topology and architecture of the glandular structures. In a prior blog post, we reported promising preliminary results on a small dataset indicating that a traditional machine learning model called random forest trained on two recently developed vectorized persistence homology representations called persistence landscapes and persistence images can be effective in discriminating between benign and malignant colorectal cancer from histology images. In this blog post, we investigate the effectiveness of advanced deep convolutional neural network (CNN) models trained on both raw RGB and persistence images in the diagnosis of colorectal cancer from a relatively larger set of histology images.

Given a point cloud dataset, persistent homology can be seen as a theoretical tool to detect and characterize prominent topological features (e.g., connected components, loops, voids) at multiple scales [7]. In this section, we present a brief background on some fundamental concepts of persistent homology and the two recently proposed vectorized persistent homology representations called persistence landscapes and persistence images. See our prior blog post for a more detailed coverage of these concepts.

In this section, we present our approach for the diagnosis of adenocarcinomas from histopathology images using deep learning and persistence homology.

Detect nuclei centroids: Given a histology image, we first pre-process it using the color normalization method of Reinhard et al [9] to standardize the staining. Next, we use the unsupervised color deconvolution method of Macenko et al [3] to extract the nuclear stain and apply minimum cross entropy thresholding [4] to segment the nuclear foreground. Lastly, we use a fast Difference-of-Gaussian implementation of a scale-adaptive Laplacian-of-Gaussian of Al-Kofahi et al [5] filter to detect nuclei centroids. The aforementioned pipeline of methods were developed using their implementations in HistomicsTK: an open-source Python toolkit for histopathology image analysis that we are actively developing.

Characterization of glandular topology using persistence images: Considering the set of nuclear centroids as a point cloud, we compute the persistence diagram of its Vietoris-Rips filtration for the homological dimension-1 corresponding to 2D loops using a fast multiscale approach developed at Kitware [2]. We then compute the persistence image representation of this persistence diagram to characterize the 2D voids/loops formed by the point set of glandular epithelial cell nuclei at multiple scales (Figure 3).

We used the colon cancer dataset provided by [1]. This dataset contains H&E stained histopathology images collected from the Department of Pathology of Zhejiang University in China that are scanned using the NanoZoomer slide scanner from Hamamatsu. Regions containing typical cancer subtype features are cropped and selected following the review process by three histopathologists, in which two pathologists independently provide their results and the third pathologist merges and resolves any conflict in their annotations. It contains images of a total of 717 regions (355 malignant, 362 benign) with a maximum scale of 8.51×5.66 mm and average size of 5.10mm2. All images were obtained at 40x magnification with a resolution of 226 nm/pixel. We create our training dataset by dividing these images into patches of size 1024×1024 with an overlap of 128 pixels and assign the image label to all the patches extracted from each image. Note that this may not always be true as there could be benign patches inside a malignant image. However, this was the best public, labeled dataset that we could find. We assume that the deep learning models can be resilient to such noisy labels provided that they do not occur very frequently in the dataset.

Data preprocessing: Many of the patches in the dataset turn out to be low contrast images, contain a significant amount of background and/or tissue regions with very few nuclei. We discard such patches based on the following three criteria:

The remaining images are then split into train, validation, and test sets. We made sure that all the patches from a single image are included in only one of these three sets to avoid similar looking images. The final distribution of the data after the split is shown in Table 1 below:

Training: It is clear from Table 1 that the training data is skewed towards malignant samples. This will make the model biased towards predicting a malignant class more often than a benign class. We use inverse weight balancing to mitigate this issue of class imbalance, where the loss is multiplied by a certain factor inversely proportional to the frequency of the number of samples from that class. All the models were implemented in Keras with a TensorFlow backend. If the validation loss does not decrease after 2-3 epochs, we use the Adam optimizer and reduce the learning rate by a factor of 2. All the models were trained with a categorical cross entropy loss. The model weights are saved to a checkpoint by monitoring the validation loss. The RGB image is preprocessed by subtracting from it the individual means for three channels and dividing them by the variances, both of which are obtained from the ImageNet dataset. The persistence images are scaled by dividing each pixel value by a factor which is calculated as the 95th percentile of all the persistence images in the training set.

Figures 7 and 8 show the False Positive and False Negative samples from the test set, respectively. Of the total 1026 samples used for testing, the hybrid model had a false negative count of 21 and a false positive count of 160. This shows that many of the benign patches are being classified as malignant which might be due the label noise introduced by assigning the image level label to all the patches extracted from it.

In this work, we investigated the use of deep learning and persistence homology for the diagnosis of adenocarcinomas in histology images. Our results indicate that a deep learning model trained on raw RGB images performs significantly better than persistence images. While the hybrid model produces the best performance amongst the three, but contrary to our expectation, it performs only slightly better than the model trained on raw RGB images. This suggests that the hybrid model is able to extract information very similar to that obtained from raw RGB images. Also, the performance of even the best model is lower than expected, probably due to the assignment of image-level labels to all of its patches which might be inducing a significant amount of label noise in the dataset. In the future we plan to use multiple instance learning [8] to address this problem. The source code for this project is in this GitHub repository: https://github.com/KitwareMedical/HistologyCancerDiagnosisDeepPersistenceHomology. 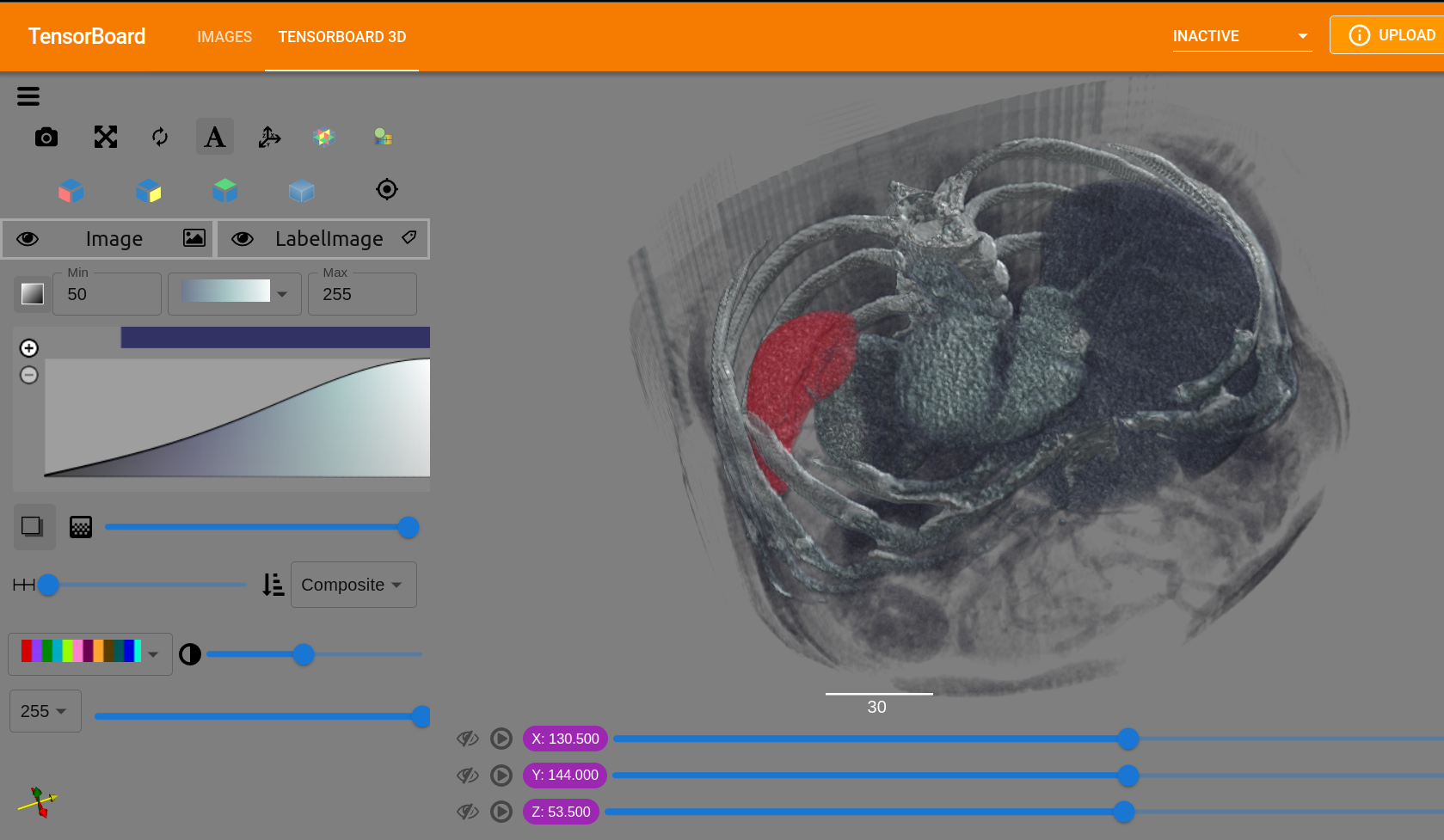