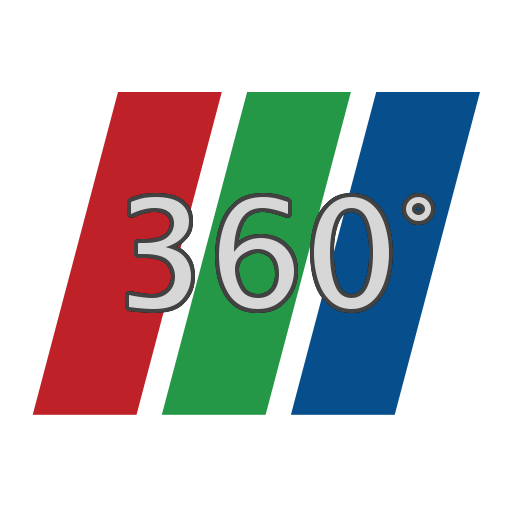 Nowadays, it is quite common to have access to a device capable of displaying 360° scenes like VR headsets, planetarium/dome screens or a simple smartphone screen with the internal gyroscope acting on the virtual camera direction.

In order to display an image or a video with these devices, a convenient way is to project the 360° scene using a common projection like the equirectangular projection (Figure 1) or the azimuthal equidistant projection (also known as fish-eye – Figure 2).

Sometimes, visualizing the dataset inside it instead of looking at it from the outside adds a new level of perception. Being limited to a small view angle can be frustrating on some datasets and allowing the immersion improves drastically the visualization experience.

With the upcoming ParaView v5.7, it possible now to produce 360° images or videos in real-time thanks to the “Panoramic View Plugin” and the new “Panoramic Projection View” it offers.

Taking benefit of this new feature, DKRZ (German Climate Computing Centre), with their partner HZG (Centre for Materials and Coastal Research), are using ParaView to generate various animations, ranging from climate and weather to material science, to be displayed within a large mobile dome. HZG also developed an app to display 360° animations on any smartphone showing their 360° Science. Both centers are also using VR goggles, not only for public outreach but also to foster their research.

In the plugin list, be sure to enable the plugin “PanoramicProjectionView”. Once enabled, a new view is available in the view list (see Figure 4).

There are 3 parameters available when this new view is selected (see Figure 5).

The new render view works well with both surface and volume rendering but there are still known limitations.

Under the hood, ParaView exploits the power of VTK render passes pipeline to capture six off-screen square images for each direction (front, back, top, bottom, right, and left) into a cubemap texture. This cubemap contains the whole 360° scene. Special care must be taken to the camera parameters when capturing each direction to ensure that the field of view is exactly 90° and the horizontal/vertical ratio is exactly 1:1 in order to correctly fit the cubemap faces.

An image processing pass will then combine all the faces of the cubemap and project them to a single 2D image that will be displayed to the ParaView render view.

Special thanks to Niklas Röber from DKRZ for his valuable help regarding this new feature and the redaction of this article.

This work was supported by Helmholtz-Zentrum Geesthacht – Center for Materials and Coastal Research (HZG).

Michael Migliore is an R&D Engineer at Kitware, France. He is a developer of VTK and ParaView since 2017. His areas of expertise include computer graphics, physics simulation, collision detection, and software development.

Joachim Pouderoux is a Technical Lead at Kitware, France. He is a developer of VTK and ParaView since 2012. His areas of expertise include scientific visualization, computer graphics, interaction techniques, Voronoi meshing and software development.

3 comments to Generate 360° images with ParaView