Kitware is proud to announce the latest major release of its open-source solution, MIDAS, under a new name: MIDAS Platform. This third major version of MIDAS Platform introduces several new features and improvements. The user interface has been completely redesigned in order to streamline the user experience. Thanks to its new framework based on the fully-optimized Zend framework, MIDAS Platform v3 now runs up to ten times faster compared to previous versions. The system now supports several databases, including MySQL, PostGreSQL, and distributed databases such as MongoDB. MIDAS Platform v3 also introducse a new API and a framework heavily based on modules, allowing developers to quickly implement new features and easily deploy them on live servers.

Digital data management has become a core infrastructure for scientific organizations and research institutes that need to collect, manage, process, and disseminate large amounts of data. Tasks such as data retrieval, visualization, and processing can become unmanageable in the face of large volumes of content.

Built with flexible and robust technologies, MIDAS Platform allows the users to manage, analyze, and visualize any type of digital media, ranging from medical images to text documents and massive data collected from numerical simulations. The MIDAS Platform server follows open standards for data storage, access, and harvesting. It has been optimized to store massive collections of scientific data, as well as related metadata and reports. 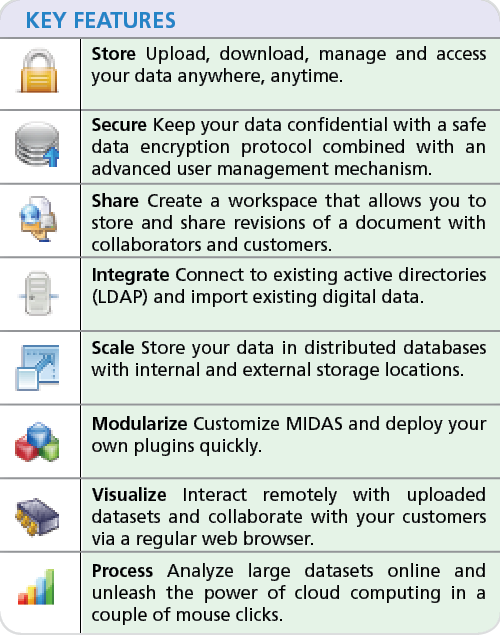 MIDAS Server defines the core of the MIDAS framework. It is built for high performance, high volume environments with efficient transaction management, retrieval and storage. Using the well-known open-source framework Zend, MIDAS Server uses a powerful and easy-to-use architecture with advanced features such as the use of a new database abstraction layer and a remote assetstore management. These two features allow a MIDAS administrator to abstract the storage of the data from the application and have virtually unlimited storage.

MIDAS Server is centralized and can be accessed through a variety of clients, including web browsers. Access can be provided across an enterprise, including distributed collaborating teams. It provides search capabilities based on data or metadata queries. Optionally, data can be published with permanent, public web handles that are indexed by Google, Yahoo, and other search engines. MIDAS Server supports friendly and secure upload/download tools that can move multiple data files and/or documents in a single operation.

The web interface has also been completely redesigned for efficiency and speed. User studies have been conducted to optimize the flow of information and allow users to quickly upload, search and manage data. The interface has an integrated collaboration environment to allow web teams to work together on content and projects with a globally dispersed team.

New features in this release include:

A screenshot of the new web interface is shown below:

To improve the MIDAS user experience, we are working on a new, powerful way to store data using the database system MongoDB. For support, we are using the well-known post processing tool, HADOOP.

This version of MIDAS Platform brings a new modular framework. Each module allows developers to add functionality to the core MIDAS and customize each page of the interface using a simple, efficient mechanism. The modular framework derives from the core and allows access to the main functionalities of MIDAS. Several plugins have been added, such as LDAP, WebDAV, and the visualization plugins.

We wanted to keep MIDAS Platform an easily customizable framework, so we created this modularization as an easy way to add specific features and customize the display of your MIDAS installation.

The MIDAS Visualization module brings online visualization to MIDAS platform. Previews of common files (such as Microsoft Office documents, PDFs and images) are automatically and instantly generated within the web browser, without having to download the data.

Using ParaViewWeb technology, MIDAS Platform integrates a powerful remote visualization environment that allows users to interact directly with 3D content from the convenience of a web browser. This technology was recently presented at the ACM Web3D Conference in Paris in June.

MIDAS Platform unifies scientific collaboration processes and data management systems. Gone are the days of trying to integrate and maintain separate tools for fundamental operations and waiting hours in order to download massive datasets for the purpose of visualizing the content. Thanks to MIDAS Platform, research teams may acquire image data through a variety of imaging modalities, as well as associated metadata. The data is then automatically rendered for collaborating researchers to browse, analyze, and retrieve. The data can also be made available to the public, so that scientists worldwide can use them for their research.

Figure 2: Screenshot of the MIDAS Visualization plugin representing an interactive remote rendering of a volume rendered chest CT.
MIDAS Desktop: A Standalone Cross-platform Data Management Application
MIDAS Desktop is a cross-platform, standalone application written with Qt for synchronizing a MIDAS server. MIDAS Desktop allows both anonymous and authenticated access to data using MIDAS’s Web API (RestFull). MIDAS Desktop uses terminology similar to Git. Resources (data, folders, …) are pulled or cloned from the server to the client, and stored client-side in a SQLite database. The client can add local resources to their local repository, and then upload the new resources to the MIDAS server.

Web-based tools are great but there’s one little catch: they are inherently limited by your internet connection. Using the MIDAS Desktop tool allows you to use, manage and edit the data stored on your MIDAS Server while offline.

The MIDAS Desktop is currently being converted to the new MIDAS Platform v3 design. The Web API is very similar to MIDAS v2, but the concept of communities, collections and folders have changed.

Getting started with MIDAS Platform

Julien Jomier is currently directing Kitware’s European subsidiary in Lyon, France. He is also the lead architect of MIDAS and supervises the scientific data management efforts at Kitware.

Charles Marion is an R&D engineer at Kitware’s European subsidiary in Lyon, France. He is the principal architect and lead developer of MIDAS 3 and the Insight Journal. 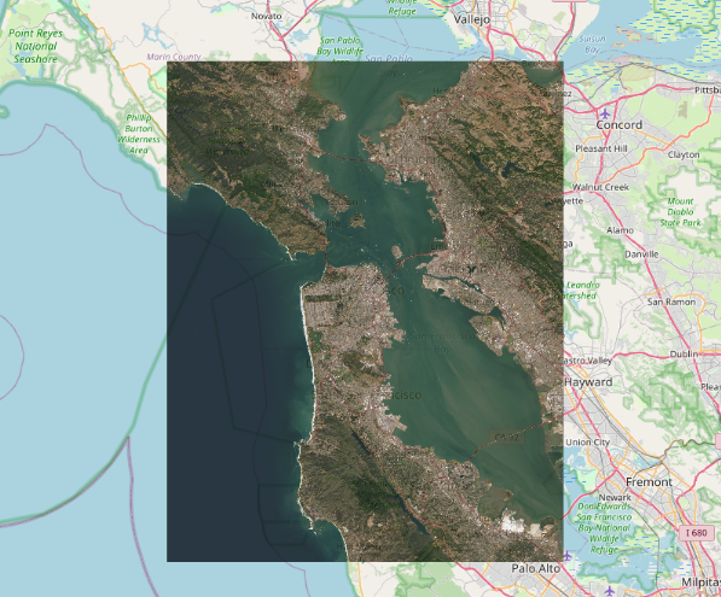