Introducing SlicerAstro: A Visualization Tool for Hydrogen in Galaxies 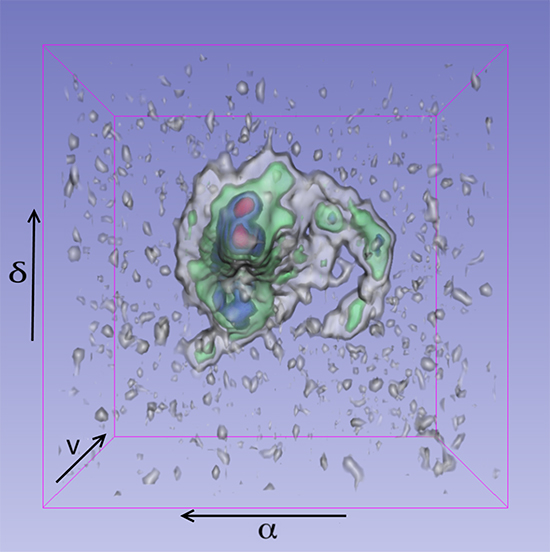 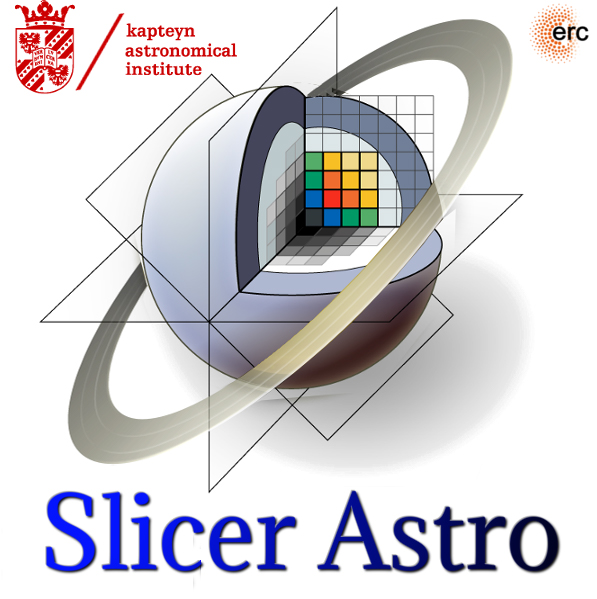 Upcoming neutral hydrogen (HI) surveys will deliver large data sets, in which daily dataflow will reach one terabyte. One of these surveys, Apertif [1], will provide information about HI in and around hundreds of thousands of galaxies. To find and characterize HI objects, automated processing methods must use all of the three-dimensional (3D) information (two positional dimensions and one spectral dimension) that the surveys make available. Three-dimensional visualization is essential to the qualitative and quantitative human inspection of results from automated source-finding and analysis pipelines [2].

SlicerAstro [3,4] is an extension of 3D Slicer [5] that aims to provide astronomers with a powerful and interactive visualization environment. In this environment, astronomers can analyze complex sources that automated pipelines such as SoFiA [6] find. These sources include interacting galaxies, tidal tails, HI filaments, and stripped galaxies.

An exhaustive review of open-source 3D visualization packages [2] led to the choice of 3D Slicer as the preferred platform for the development of SlicerAstro. The factors behind this choice include the following:

In addition, the medical visualization tools that 3D Slicer implements suit the needs of astronomical applications. For example, 3D Slicer optimizes the display layout and the process of navigating through data for parallel two-dimensional visualizations (e.g., movies of channel maps).

Three-dimensional Inspection of HI in Galaxies

The following example uses an observation of the WEIN069 galaxy in the Perseus-Pisces supercluster filament. The example shows in detail the character of a radio emission of HI in and around the galaxy. The example also illustrates the benefits of 3D data visualization.

In the following video, a 3D view displays the HI distribution and the kinematics of WEIN069. The view provides an immediate summary of the structures in the data that pertain to space and velocity. The view confirms that the structures are coherent in all three dimensions. Two spatial dimensions (right ascension, α, and declination, δ) measure the projection of HI onto the sky. The radial velocity dimension measures the velocity of HI along the line of sight.

In this case, two main components are visible. The first component is a central body. This body illustrates the regularly rotating disk of the galaxy. Three-dimensional warping results from the projected rotation of the disk. The second component is a tail of unsettled gas that results from tidal interaction with another galaxy. The tail relates to the rotating disk in terms of space and velocity.

While SlicerAstro facilitates the analysis of typical HI data sets, astronomers still require training to interpret the 3D structure of the data and to get acquainted with the SlicerAstro tool itself. During this training process, interactivity is a key factor because it allows flexible viewing of the data.

SlicerAstro is an open-source project that is currently available in the extensions manager of 3D Slicer. Although SlicerAstro is still under development, it already offers several stable features for the qualitative visualization and inspection of HI in galaxies. For example, SlicerAstro can import and save astronomical data in the Flexible Image Transport System (FITS) format [7]. SlicerAstro loads such data as AstroVolume data structures. These structures store 3D astronomical images, FITS headers, and information from the astronomical world coordinate system (WCS) [8,9].

Next Step: Modeling and Comparative Visualization of HI in Galaxies

It is possible to use the output model of automated model-fitting algorithms to visually highlight different components in a data cube. For example, the below image displays data from the NGC2403 galaxy. The image clearly shows the presence of an extra gas component. This component consists of extraplanar gas close to the disk of the galaxy that rotates at a lower velocity than the disk. Thus, the 3D visualization gives an immediate overview of different coherent structures in the galaxy.

Although the development of SlicerAstro mainly focuses on 3D HI data, it is a useful tool for any other type of 3D astronomical data such as optical data. Please contact the authors or submit an idea to the issue tracker to provide feedback on how to improve AstroSlicer [3].

Support for SlicerAstro came from the European Research Council under the Seventh Framework Programme of the European Union (FP/2007-2013)/ERC Grant Agreement nr. 291-531. Support also came from Steve Pieper (Isomics, Inc.) and Andras Lasso (Laboratory of Percutaneous Surgery at Queen’s University) in the form of feedback and  assistance.

Davide Punzo is a doctoral student at the Kapteyn Astronomical Institute of the University of Groningen. His research interests not only include the domains of technology, computational sciences, and visualization, but they include the applications of these domains in astronomy.

Thijs van der Hulst is a professor in radio astronomy at the Kapteyn Astronomical Institute of the University of Groningen. His expertise is in the structure and evolution of galaxies, with special focus on the relation of the interstellar gas component to star formation and the buildup of stellar mass in galaxies.

Jos B.T.M. Roerdink received a Doctor of Philosophy in Theoretical Physics from Utrecht University in 1983. He currently is a professor and the director at the Johann Bernoulli Institute for Mathematics and Computer Science of the University of Groningen. There, he holds a chair in scientific visualization and computer graphics.