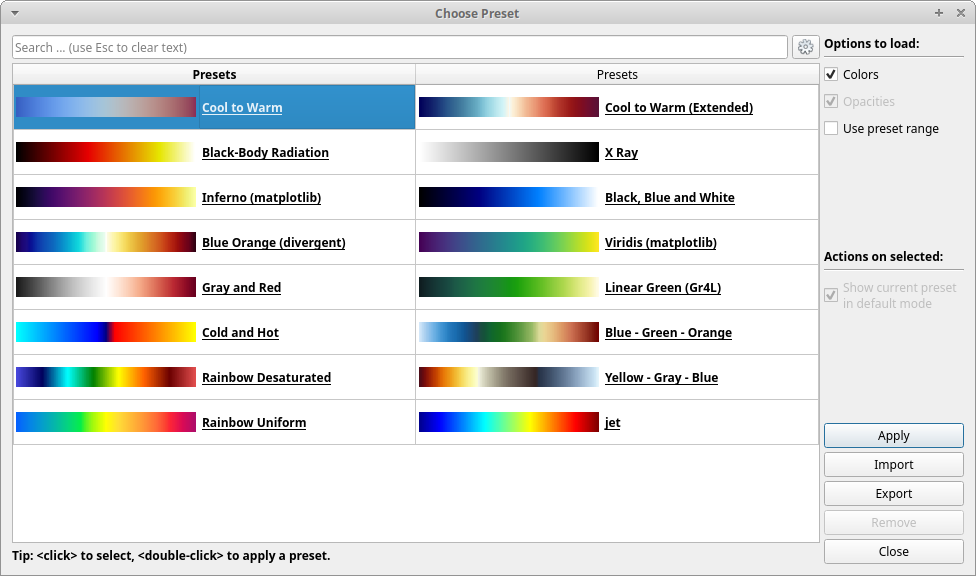 ParaView comes with a collection of predefined color maps used to map data values to colors in a visualization. The collection has grown ever larger over the years with 188 color maps. The ParaView color map preset dialog in ParaView 5.5 simply showed the list of presets available in no particular order.  However, in this list there was no information about which color maps are recommended for use, and the list was extremely long. While you could search for a color map by name, this assumed you already knew what you were looking for. Furthermore, the dialog did not allow interaction with the main ParaView window while it was active.  For these reasons the color map preset dialog was due for an overhaul.

Coming in ParaView 5.6, the new dialog defaults to a subset of “good” colormap presets that were chosen after a long discussion with visualization experts.   It shows the presets in two columns to allow more colormaps to be displayed at once (and so all the recommended defaults fit on screen at once). Additionally, interacting with the render view of the main window is now possible.  You can zoom, pan, rotate the camera, etc. while the colormap preset dialog is up. The rest of the ParaView UI will remain unresponsive though: only the render view will be interactive.

When the advanced button (circled in Figure 3) is toggled, the new colormap presets dialog will show the full list of presets similar to the old dialog.  When a non-default preset is selected the “Show current preset in default mode” checkbox on the right becomes active. If you check this box then that preset will be shown even when advanced mode is off.  This will allow you to set your own commonly used presets as defaults which will show up without having to open the full list.

The new dialog will be available in the ParaView 5.6 release.

The work was funded by Sandia National Laboratories.

We give special thanks to the visualization experts who formulated the list of default color maps: