IEEE Supercomputing 2010
ParaView developers from Kitware and elsewhere were hard at work at the IEEE Supercomputing (SC10) conference in November. Andy Bauer and Pat Marion along with Sandia’s Ken Moreland and Nathan Fabian presented a tutorial on ParaView’s new coprocessing framework, through which ParaView can be connected to a running simulation to visualize results in-situ. Dave DeMarle set up a demonstration of ParaView’s Manta ray traced rendering plugin, which did interactive multi-million polygon count software rendering on a four node Intel cluster at the Intel booth and also worked behind the scenes with John Patchett, Chris Mitchel and Joshua Wu from LANL setting up a demonstration of vortex core detection in ParaView on high resolution 3D ocean models at the LANL booth.

Kitware Receives HPCwire Readers’ and Editors’ Choice Awards
At SC10, Kitware was presented with HPCwire’s Editors’ and Readers’ Choice Awards for Best HPC Visualization Product or Technology for ParaView. Berk Geveci was in attendance to receive the prestigious awards from Tom Tabor, the publisher of HPCwire.

The HPCwire Readers’ and Editors’ Choice Awards are determined through online polling of the global HPCwire audience, along with a rigorous selection process involving HPCwire editors and industry luminaries. The awards are an annual feature of the publication and constitute prestigious recognition from the HPC community. “HPCwire readers are among the most informed in the HPC community and these awards represent which HPC-related companies are making the biggest impacts in mind-share within this community,” said Tom Tabor. “These awards send a strong message to the recipients that those in the global HPC community recognize their work, and consider their efforts meritorious.”
Kitware is honored to accept these awards on behalf of the global ParaView community that has made ParaView the success it is today. Key members of this community, who have provided invaluable technical expertise and support, include Sandia National Laboratories, Los Alamos National Laboratory, the Army Research Laboratory, the Swiss National Supercomputing Centre, and Électricité de France. 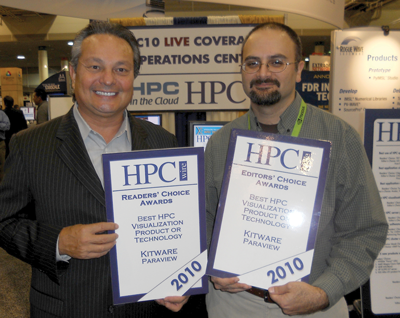 Tom Tabor,  the publisher of HPCwire, with Berk Geveci

Kitware sponsored the event for the first time this year and co-sponsored the Young Scientist award with NDI, with Stephen Aylward present to hand out the awards. In addition, Kitware taught and organized several tutorials and workshops.

Stephen was an instructor at the “From MICCAI Algorithms to Clinical Translational Tools: The NA-MIC Platform” workshop, which addressed the critical step of maximizing the long-term positive impact of MICCAI algorithms by fostering their deployment, validation and concrete use by the clinical research community.

Luis organized the ITKv4 Mesh Hackfest, designed to make progress on the refactoring of ITK’s Mesh classes, in which Michel actively contributed long into the night. Luis also taught a tutorial on Microscopy Image Analysis. The other collaborators included: Hanchuan Peng and Fuhui Long from HHMI – Janelia Farm Campus, Sean Megason from Harvard University, Jense Ritch from GE Research and Tianming Liu from University of Georgia. The tutorial covered state-of-the-art microscopy image analysis and included hands-on exercises using the V3D application (developed at HHMI) and a set of ITK plugins. The teaching materials are available under Creative Commons License 3.0 at the MIDAS collection: http://midas.kitware.com/collection/view/30.

One of the highlights of the conference was the full-day tutorial “DIY Visualization Applications,” taught by several groups including the University of Utah, Sandia National Labs, the University of Münster, and Kitware’s Berk, Jeff and Utkarsh. The course presented a mix of visualization tools, focusing on customization for particular application needs and explained the utility of Titan for quickly building useful informatics applications. One example program used text analysis and Protovis visualizations to enable understanding, searching, and navigating large collections of documents. In just a few minutes, it processed the entire multi-gigabyte VisWeek 2010 paper dataset, demonstrating a very relevant example to the audience.

VTK Architecture Review Board
The VTK Architecture Review Board (ARB) was formed approximately one year ago. The ARB consists of a group of individuals whose goal is to advance the technology in VTK by providing direction and oversight to the development of VTK. The ARB was formed to balance the design goals of the growing VTK community, ensuring that changes benefit the community as a whole. The two primary functions of the ARB are to maintain short- and long-term roadmaps of VTK and to make decisions relative to high-impact code and design changes. To learn more about the VTK ARB, please see the wiki http://www.vtk.org/Wiki/VTK/ARB, which contains a current list of VTK ARB members and meeting notes from the past year.

FOSS Education Meeting
Kitware is actively involved in educating the next generation of engineers on the legal, technical and social concepts of Free and Open Source Software. One of the highlights of this effort is our fall semester course at the Rensselaer Polytechnic Institute (RPI) on “Open Source Software Practices.”  We also explore collaborations with other higher education institutions at the local and national level. In this context, on March 30th, we held a meeting with university professors from the Albany area in order to exchange ideas on how we could collaborate to ensure that FOSS-related activities that take place in one campus can benefit students on other campuses. We also exchanged ideas on how the curriculum of computer science and software engineering could be improved in order to better match the needs of the marketplace. Topics of great interest were: the software development process, software quality, and large project management. The meeting was attended by Prof. Seth Chaiken from SUNY Albany, Prof. Kristina Striegnitz and Prof. David Hemmending  from Union College and Prof. Mukkai Krishnamoorthy from RPI and Will Schroeder, Bill Hoffman, Niki Russell, Katie Cronen and Luis Ibáñez from Kitware.

RSNA 2010
This year the annual meeting of the Radiological Society of America (RSNA 2010) featured 60,000 attendees, 4,200 scientific expositions and more than 700 technical exhibitors at McCormick Place in Chicago.  It also featured the first ever Kitware technical exhibition at Booth 1305, Lakeside Center.  RSNA offers a unique opportunity to meet with many of the researchers, collaborators and customers with whom we work but do not normally get to see.  It also provides an excellent opportunity to meet new collaborators and customers.  The addition of a Kitware booth gave us a central location and allowed us to showcase more of the open-source solutions that we help support.

Along with the technical exhibit, Kitware, maintained a high level of participation in the conference.  Stephen Aylward and Rick Avila reprised their wildly successful “Open-Source Tools for Medical Research and Applications” course.  The 90 minute session provided a quick introduction to ITK, VTK and Slicer 3D and was intended to get an interested audience started on the open source path.  Rick Avila followed this up with some recent Kitware research into “The Evaluation of a New Pocket-sized CT Calibration Phantom” during the technical sessions.  Kitware was also asked to participate in the Quantitative Imaging Reading Room and responded with “An Open Source Toolkit for Quantitative Lesion Sizing” focusing on the Lesion Sizing Toolkit (LSTK), which is soon to become a part of ITK.

Finally, as part of the spirit of free and open-source software, Kitware announced that it will no longer be charging a fee for its VolView visualization platform. 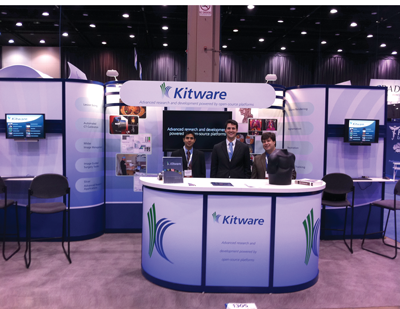 Kitware Offers Free Access to VolView
In Novemeber, Kitware announced that VolView, an intuitive and interactive system for volume visualization,  is now available free of charge to researchers around the world.

Compatible with Windows, Mac or Linux, VolView is capable of volume rendering, maximum intensity projections and oblique reformatting. In addition, VolView can load multiple datasets simultaneously, support creating and applying 2D and 3D display presets and even make image measurements within a user defined contour. This simple and easy-to-use interface allows for a more rapid navigation for the user. The 3D imaging and segmentation capabilities of VolView are among the most advanced in the world.

“Kitware’s goal is to provide this advanced imaging tool to researchers around the world and work with the imaging community to improve the capabilities and help us make a future version of VolView system both free and open source,” said Rick Avila. 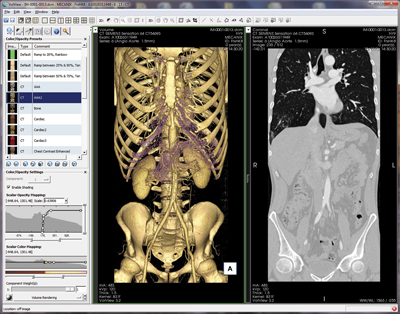 A contrast CT scan and the corresponding image in VolView

Although not approved by the Federal Drug Administration (FDA), hence restricted from use in clinical settings, VolView has immense research value and real-world medical potential. For instance, a 3D rendering of the size and shape of an ailing patient’s aorta would allow medical researchers to evaluate whether certain display methods are better than others for identifying subtle aneurisms. Kitware works collaboratively on research endeavors like this and is actively seeking funding to move VolView from a free tool available in binary format to a true open-source platform.

ActiViz is Now Free and Open-source
The source code for ActiViz.NET and mummy, Kitware’s tool for generating C# wrappers around C++ classes, is now available as open source under a BSD license.

VTK, written in C++, does not easily integrate into the Microsoft development environment. ActiViz.NET was developed to overcome this issue by building an integration layer for VTK, enabling use in the Microsoft .NET framework. Originally a proprietary product, ActiViz.NET is now open-source, allowing developers the freedom to customize and utilize the software to meet their specific needs. While ActiViz.NET comes with an application to be used with the Wikipedia Browser, it requires writing software to take full advantage of the functionality of VTK.