Updated Para View Guide Coming Fall 2011
Kitware is preparing to release the latest version of the ParaView Guide in Fall 2011. Since the previous release, the ParaView Guide has been updated to cover ParaView 3.10. The guide has also been expanded to include discussion about the theory behind Paraview and contains new topics. The print version of the book will feature additional chapters on specific use-cases of ParaView.

Unlike previous editions, the ParaView Guide for 3.10 is also available for free online in a public wiki. The guide is also included for free with the latest version of Paraview.

Where Does Your Money Go?
In April, Google announced their Visualize Your Taxes challenge, which uses data visualization to show people where their tax money goes. Out of 40 entries, six were selected as finalists, including one by Kitware’s Jeff Baumes.

Jeff’s visualization centered on using a calendar to let people see how their money is distributed throughout the year. His interactive calendar can be found at http://whatdoyouworkfor.appspot.com/index.html. 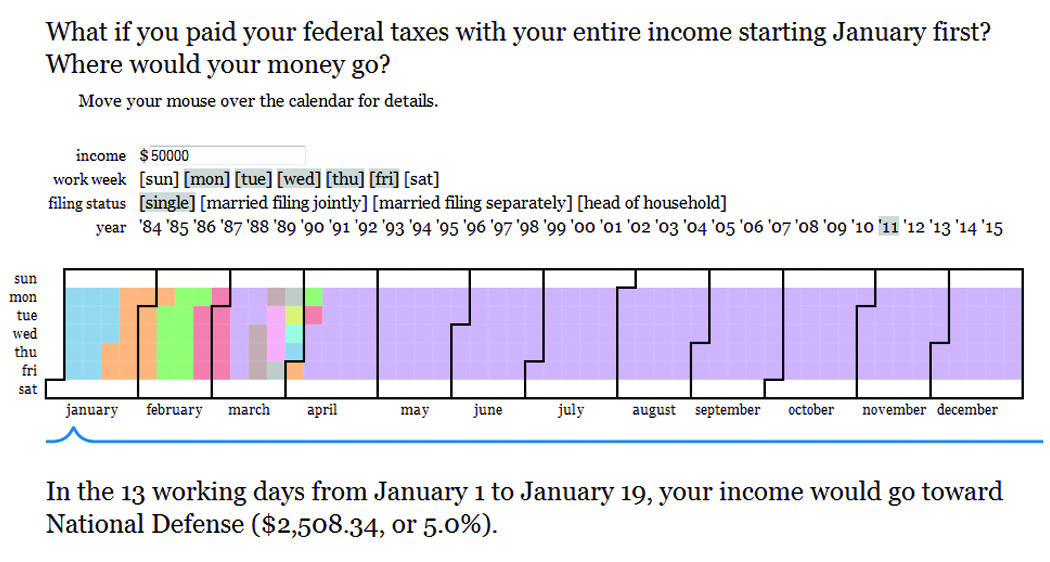 The two-day VTK course was attended by four research and development engineers who came with some prior knowledge of the toolkit. Topics covered included an overview of VTK architecture, visualization pipelines, information visualization methods, how to write custom filters, and parallel processing and rendering techniques.

The third day was the first MIDAS course given out of Kitware’s European office. MIDAS was met with great enthusiasm, as Vega Technologies deals with terabytes of maps and 3D terrains that require integration with their applications. If you are interested in one of our courses, please visit our website to see our full range of offerings.

The Open Source Software Practices talk was attended by about 50 people, and covered why and how open source development works. The course on ITK was attended by close to 100 people and was standing room only. The hands-on ITK session ran for two hours and included the students’ discovery of a bug in one of the examples in ITK.

Dr. Roysam is poised to make the University of Houston an open source hub in Texas and is planning a number of upcoming open source activities and courses.

The talk was led by Bill Hoffman, VP and CTO at Kitware, and Nicholas Ruepp, a Producer at Vicarious Visions, and focused on Agile Programming Practices. They discussed how agile practices are implemented at each company. Nicholas highlighted how Vicarious Visions uses agile practices to maintain a consistent level of effort throughout production, rather than excessive swings often experienced with a waterfall processes. Bill spoke about how Kitware implements agile programming by starting from a key text and adapting the methodologies to fit the needs of the company. 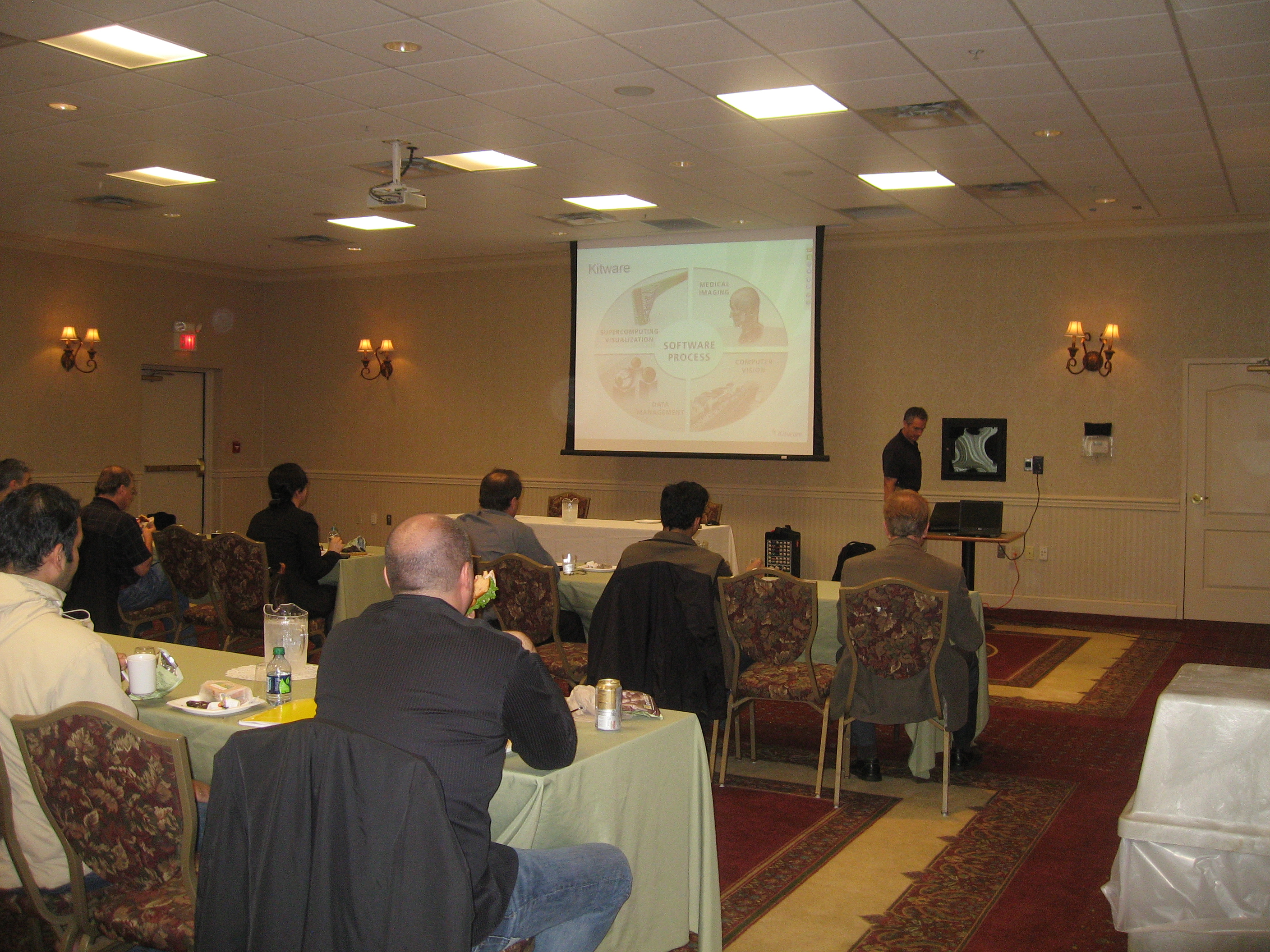 Kitware Hosts Lunch and Learn Seminar
In early May, Kitware hosted a lunch and learn seminar called “Innovate, Collaborate and Reduce Costs with Open-Source Solutions” at the North Carolina Biotechnology Center in Research Triangle Park. The seminar was attended by people from a range of businesses in the Research Triangle region including RENCI, Synexis, Geomagic Inc., and Duke University.

Will Schroeder presented on open-source solutions from a high-level point of view, and provided four specific case studies to further clarify how open source can address today’s business challenges. Brad Davis spoke and presented case studies on MIDAS and Slicer, and Lisa Avila discussed case studies on CMake and ParaView.

After presentations, the floor was opened for questions and discussion. There was considerable enthusiasm around Kitware’s software process, the CMake/CTest/CDash suite, and work being done in the medical field.

Kitware Attends the 6th International OpenFOAM Workshop
The 6th OpenFOAM(r) Workshop was held June 13-16th at Penn State University. Kitware sponsored this event and Dave DeMarle attended and presented a tutorial on Advanced ParaView usage for CFD researchers. The tutorial was a demonstration of some of the recent capabilities available in ParaView 3.10. These include those made possible by Takuya Oshima’s overhaul of the vtkOpenFOAMReader, such as native support for parallel cases, as well as some of ParaView’s quantitative analysis capabilities such as temporal data analysis, plotting forces acting along arbitrary features, material and flow analyses, and some advanced rendering techniques provided by ParaView plugins.

The rest of the conference was equally constructive. Impressive papers included a demonstration and scaling study of analysis on Jaguar, the 3rd fastest supercomputer in the world; a simulation of odorant transport in the canine olfactory organs; the creation of a more flexible computational model and its application to the problem of modeling anaerobic digesters; and an industrial design optimization using open source tools. This last paper presented an effort in which a suite of open source tools spanning the entire preprocessing, simulation, and post processing pipeline were brought to bear on different design projects and in which genetic algorithms were used to tune the design parameters to maximize utility.

Finally, as a newcomer to this particular open source community, Dave was struck by how similar the larger problems are, such as the need to increase the availability of high quality learning materials; to facilitate increased contributions from a wider development community; to speed development, testing, and integration generally; and a desire to reconcile competing development camps.

OPENFOAM® is a registered trade mark of OpenCFD Limited, the producer of the OpenFOAM software.

Since 2003, Winning Workplaces, an Evanston, Ill.-based nonprofit organization, has recognized firms that attribute much of their business success to their commitment to exemplary people practices and outstanding workplace cultures. This year, Winning Workplaces received nearly 350 completed applications for the contest. A national panel of experts in leadership and small to mid-sized business judged the finalists based on specific metrics and qualitative assessments of the finalists’ success in creating workplace that engage employees and deliver bottom-line results.

“We are honored to be recognized as one of this year’s Top Small Company Workplaces,” said Will Schroeder, CEO of Kitware. “Making this list affirms that we have an empowered, collaborative culture, and that our team is solving some of the world’s most challenging technology problems while having lots of fun along the way.”

UNC Students Compete Using ParaView
ParaView was recently used in Russell Taylor’s Comp 715: Visualization in the Sciences class at the University of North Carolina at Chapel Hill. The course is aimed at both computer science students whose future work will include design and implementation of visualizations, and natural science students who will use them.

As part of the course, students are asked to develop a visualization tuned to a particular problem by using a toolkit or custom code. Working in teams of two, students used the ParaView visualization application to generate images. 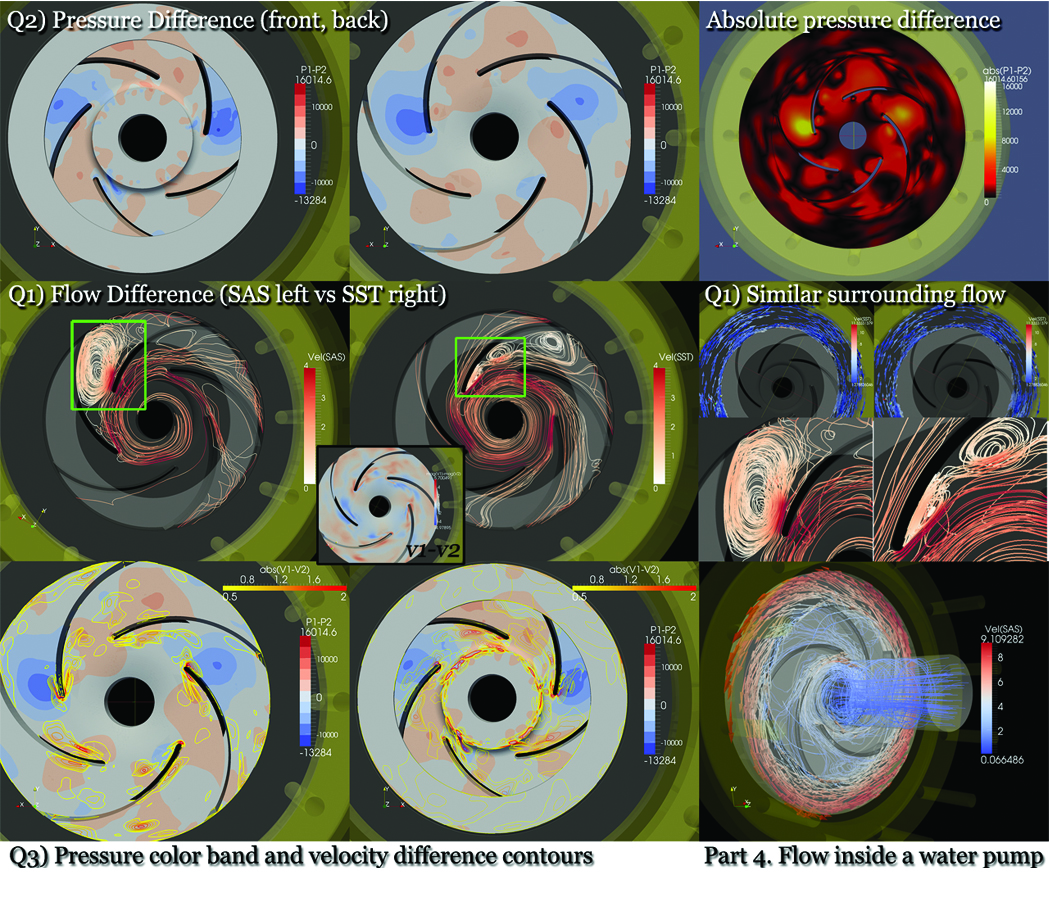