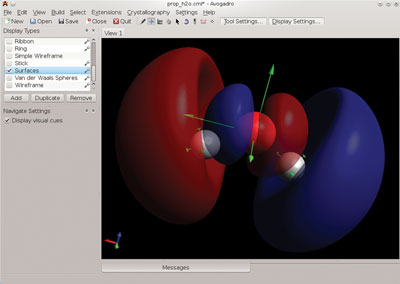 “From data to analysis: linking NWChem and Avogadro with the syntax and semantics of Chemical Markup Language” describes an end-to-end use of semantically-rich data in computational chemistry through the use of the Chemical Markup Language (CML) framework.  In this paper, the semantically-rich data is generated by the NWChem computational chemistry software and the FoX library, and is used by Avogadro for analysis and visualization.

The article is featured in the same collection on Semantic Physical Science as the Avogadro paper published last summer, “Avogadro: An advanced semantic chemical editor, visualization, and analysis platform,” which has become one of the Journals most-read papers.

ITK Community Members Contribute Fedora Package
In May, the Insight development team and community recognized the efforts of contributors Mario Ceresa and Peter Lemenkov for the creation of a new Fedora package for ITK. To create this package, the most complicated issue was ensuring that it complied with Fedora guidelines, which includes rules such as “no bundled libraries” and the inclusion of arch-dependent paths, etc.

As this applies to all required packages from the ground up, Mario and Peter looked through all the sources, carefully patched CMake files in order to make and install everything in accordance with the Fedora rules, decoupled libraries that were already available in the repositories, and included repositories that were missing bundled libraries.The “Insight Toolkit” package is available in the recently-released Fedora  19 distribution.

New Infovis Tool Enables Interactive Exploration of CMS Medicare Cost Data
When the U.S. Centers for Medicare and Medicaid Services (CMS) released “Medicare Provider Charge Data,” a dataset of pricing information for the top 100 most-billed medical procedures in the country, the informatics team wanted to investigate the data. They developed a web-based, interactive exploration tool to enable further analysis and understanding of the data.

Kitware’s web application enables visualization of the data at the national or state level, and highlights individual hospitals. A publicly available dataset of mortality rates (from data.medicare.gov) for these same procedures has also been included, allowing visitors on the site to explore the relationship between cost, reimbursement, and mortality rate. Future enhancements and additional datasets are planned for the application, which we hope will spur further conversation and lead to new insight into the data. 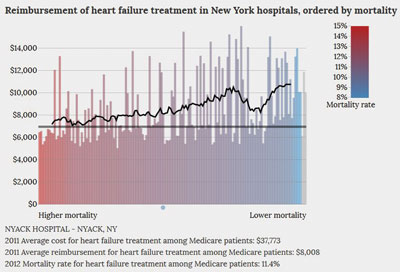 Explore the data for yourself by visiting: http://infovis.kitware.com/hospital-costs/. This effort is sponsored by the Air Force Research Laboratory and DARPA XDATA program.

DOE Phase II Funding Awarded for an HPC Simulation Framework
Kitware has been awarded $1M in Phase II SBIR funding to further develop an open-source, high performance computing simulation and computation framework for the U.S. Department of Energy. The developed model-centric integration framework enables researchers to select only the toolkits and applications needed to perform a set of simulation, computation, or analysis tasks. The resulting workflow will largely benefit small and mid-sized manufacturing firms that may not have access to HPC resources otherwise.

Phase I of this project led to the creation of the Simulation Model Based Architecture (SiMBA) framework for supporting the entire simulation lifecycle, the Simulation Modeling Toolkit (SMTK) which provides an abstract layer for the model geometry, and an attribute data manager for storing the necessary simulation information.

Phase II will focus on enhancing the current system, in addition to enabling the easy creation and providing support for the execution of applications in an HPC environment. The result will be a model-centric simulation framework for building simplified applications that are customized to a specific workflow. This work is supported by the U.S. Department of Energy under Contract No. DOE-SC0007615.

Phase II Funding Awarded For an in situ Cosmology Framework

The Department of Energy has awarded Kitware with Phase II SBIR funding for the continued development of a framework for performing in situ analysis of large-scale cosmological simulations.

In collaboration with researchers at Argonne National Laboratory, Phase I saw the development of a lightweight in situ analysis framework and the successful coupling of the framework with the Hybrid/Hardware Accelerated Cosmology Cost (HACC), one of the core N-Body codes at the DOE. Completion of Phase I demonstrated the feasibility of the approach and highlighted the need for a data management component to enable direct comparison of simulations and observations.

With this Phase II award, the team will further develop the in situ library and in situ algorithms for identifying, extracting, and tracking features in large-scale cosmological simulations. The library will also be integrated with data management functionalities and web-based technologies, which will be developed to simplify data mining and visualization workflows. This work is supported by the U.S. Department of Energy under Contract No. DE-SC0007647.

VTK Enhancements Funded to Accelerate Medical Innovation
Kitware has been awarded $1,484,180 from the National Institutes of Health for the enhancement and extension of the Visualization Toolkit (VTK). In 1993, the textbook “The Visualization Toolkit: an Object-Oriented Approach to 3D Graphics” introduced Kitware’s flagship software, VTK. Since then, this open-source toolkit for 3D interactive visualization, image processing, and analysis has been adopted and deployed in a number of medical image analysis, bioinformatics, and clinical applications.

This new award comes after a number of requests from the VTK community to reinvigorate the toolkit as a catalyst for interactive visualization research in medicine. As such, this project will update the graphics infrastructure to support the representation and rendering of large data over the web, on mobile platforms, and with interactive 3D widgets. A VTK Extension Manager will also be deployed for easy discovery and download of extensions to VTK.

To fully understand the impact of the proposed refactoring and enhancements of VTK on the medical community, the team will work in close collaboration with the Virtual Lung Project at the University of North Carolina at Chapel Hill, the Center for Imaging Science at John Hopkins University, Information Sciences in Imaging Lab at Stanford, the National Association for Medical Image Computing lead by Brigham and Women’s Hospital, and the FARSIGHT project at the University of Houston. This work is supported by the National Institutes of Health under Contract No. 1R01EB014955-01A1.

Kitware Improving Trauma Assessment Procedures with Sonograms
The National Institutes of Health have awarded Phase I SBIR funding to Kitware to the development of hardware and image analysis algorithms that will allow novice ultrasound operators to perform life-saving Focused Assessment with Sonography for Trauma (FAST) procedures.

In collaboration with InnerOptic, a leader in FDA-approved visualization and tracking technologies, Kitware will develop a low-cost system that visually-guides novice users through the acquisition of ultrasound images from the abdominal regions necessary for FAST procedures. The resulting system will be used to address equipment and training shortages in level 3 and 4 trauma centers, enabling them to reduce the morbidity and mortality associated with trauma, particularly BAT. This work is supported by the National Institutes of Health under Contract No. 1R43EB016621-01. 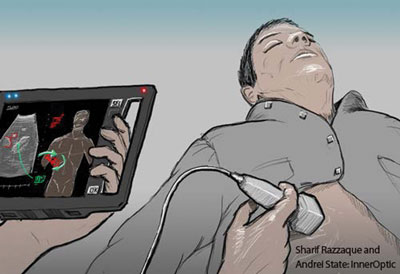 U.S. Army Funds a Universal Healthcare Exchange Language
Kitware is underway on a Phase I  SBIR research project to develop an adaptive healthcare exchange language for interaction between patients and their healthcare organizations. The resulting system will improve the flow of information and knowledge between patients, healthcare providers, and researchers, and ultimately lead to better care, evidence-based medicine and diagnoses, and longitudinal research yielding medical breakthroughs.

The project team includes Tom Munnecke (Munnecke Enterprises), one of the original designers of both VistA and the Composite Healthcare System (CHCS), the healthcare information exchange systems for the U. S. Department of Veteran Affairs and the Department of Defense, respectively; Conor Dowling (Caregraf) a company that has developed a Semantic Web interface to both of these systems; and Kitware, a leader in advancing leading-edge technologies through open-source communities.

Together the team will create an open-source, patient-centric “sandbox” that uses existing VistA and CHCS data dictionaries to create a hands-on demonstration of a Semantic Web approach for providing a universal healthcare exchange language. The open-source nature of the system will allow for easy interaction with other open-source health initiatives, including the VA-launched Open Source Electronic Health Record Agent (OSEHRA). This work is supported by the US Army Medical Research and Materiel Command under Contract No. W81XWH-13-C-0042.

Kitware Recognizes Best Student Papers at ISBI 2013
Kitware has been a regular sponsor of the International Symposium on Biomedical Imaging (ISBI), including for the Best Student Paper awards. The Best Student Paper awards are determined by a selection committee review of the top seven paper submissions to the conference. Out of this year’s 79 submissions, the committee determined the finalists based on paper originality, quality, and student contribution. Finalists then presented either a poster or oral presentation at the conference and then the three winners were selected.

This year the top three awards went to:
Emily Dennis, a graduate student researcher at the Laboratory of Neuro Imaging at UCLA, won for the paper “Development of the “Rich Club” in Brain Connectivity Networks from 438 Adolescents & Adults aged 12-30,” which was co-authored with Neda Jahanshad, Arthur Toga, Katie McMahon, Greig de Zubicaray, Ian Hickie, Maragaret Wright, and Paul Thompson.

Nikhil Singh, a Ph.D. student studying statistical shape analysis at SCI, was selected for the paper “A Vector Momenta Formulation of Diffeomorphisms for Improved Geodesic Regression and Atlas Construction,” which was co-authored by Jacob Hinkle, Sarang Joshi, and P. Thomas Fletcher.