Bender Moves the Visible Man
Bender, Kitware’s new open-source toolkit for repositioning voxelized anatomical models, was introduced in late April. Bender is used to reposition 3D labelmap models for use in computing voxel-level Specific Absorption Rates (SAR), the rates at which energy is absorbed by the body when it is exposed to radiofrequency electromagnetic fields and ultrasound.

Most anatomical models are derived from MRI or CT images which are acquired with the subject laying on a narrow platform. With these imaging modalities it is not possible to acquire images where the subject is sitting or extending their arms. Bender solves this problem by allowing the pose of the subject’s anatomy in the acquired image to be changed.

Bender provides algorithms and a user-friendly application for rigging, skinning, posing, and volume resampling, enabling researchers to interactively reposition an anatomic labelmap into a desired pose. Upcoming developments to Bender will improve the anatomical repositioning by modeling tissue-specific deformation characteristics more precisely. This work is supported by the Air Force Research Laboratory under Contract No. D22009D10. 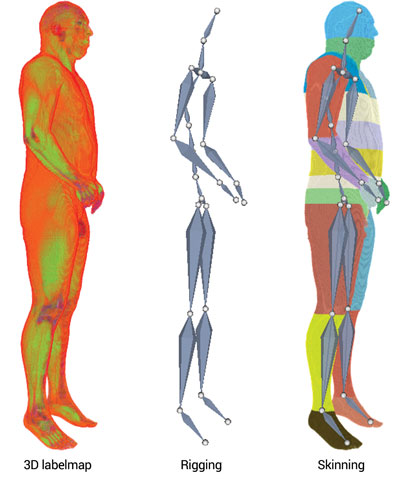 MNI at McGill University
Their first stop was at the Montreal Neurology Institute (MNI) at McGill University, where they were hosted by Dr. Louis Collins and his lab at MNI.  The group at MNI consisted of 70 participants, and waiting list of 30 others due to limited seating! Attendees were given VirtualBox machines with ITK and tutorial materials pre-installed. They were then led through a hands-on image analysis examples using SimpleITK with IPython notebooks, and step-by-step basic image filtering and ITKv4 image registration C++ examples.  Dr. Vladimir S. Fonov from the MNI lab also presented an example of IO with the MINC2 file format inside ITK.  Support for the MINC2 file format was added in ITK 4.4.0 after a previous hackathon in Montreal and an epic number of patch revisions in Gerrit. 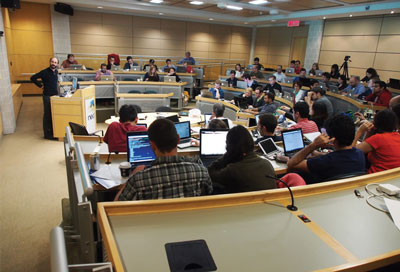 UNC Chapel Hill
The second stop on the tour was at the University of North Carolina at Chapel Hill, where they were hosted by Cory Quammen from the Computer Science department. More than 50 attendees took part in the workshop, most of them from UNC’s Biomedical Research Imaging Center, the Biostatistics department, and the Neuro Image Analysis and Research Lab; along with a small group from the Biomedical Engineering Department at Duke University.

As with the MNI event, the group was led through hands-on exercises and examples. After the workshop, the team was shown some cool new visualization demos, and got to experience the infamous virtual reality pit.

A productive hackathon took place the next day, during which Cory fixed bugs in the SCIFIO module used to read microscopy images.  Matt worked on preparations for the release of ITK 4.4.0.  Luis help Pei Zhang submit his first patch, which allowed Pew-Tian Yap to follow soon after.  Xiaoxiao helped Jian Cheng organize his code into an ITKv4 module. 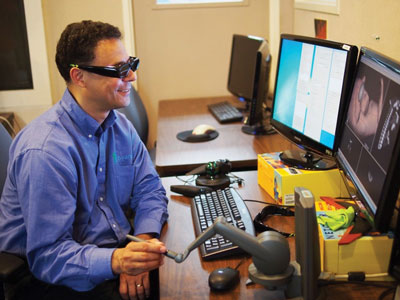 Iowa University
Lastly the team traveled to Iowa University, where they were hosted by Dr. Hans Johnson. The forty-person crowd consisted of researchers and graduate students from the Biomedical Engineering, Psychiatry, Radiology, Computer Science, and Electrical Engineering departments. Many attendees were ITK beginners without C++ experience, so the workshop focused on learning to use SimpleITK. Luis came up with a gamification strategy by writing five challenging questions for each of exercise and put them up in a simple scoring form on Google Doc to let people compete. This was a great success. Most people were able to progress well to the very end at their own pace.

The next day, the team met with Hans, his colleagues, and his students and had a productive time closing open issues, including a triage of JIRA issues. As you can see from the charts below, many issues were closed on that day (the 31th).  We found many issues that had been completed, but not closed, were no longer relevant, or had no actions that could be taken on them in their current state. Many issues were closed by requesting the the original submitter to provide more details and encouraging them to provide at least partial solutions to the problems they identified.

We were lucky enough to be hosting the drive on a sunny day, which resulted in a steady and consistent turnout. Overall the Kitware drive collected 18 pints of whole blood and six pints of double-red blood. Keep an eye out on our events calendar next Summer to take part in our 3rd annual drive! 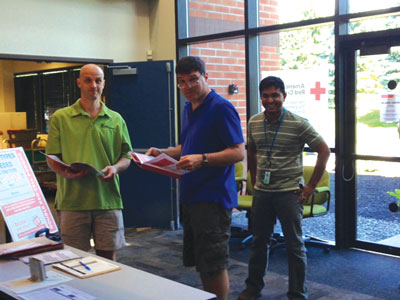 Dr. Berk Geveci has been promoted to Senior Director of Scientific Computing. Dr. Geveci joined Kitware in 2000 and now leads the scientific computing and informatics teams.

Dr. Brad Davis was promoted to Assistant Director of Business Development, a new position at Kitware which focuses on building customer relationships and seeking opportunities for the company to grow.

Drs. Amitha Perera and Matt Turek were promoted to Assistant Directors of Computer Vision. Both joined Kitware as R&D Engineers in 2007, and have contributed significant experience and technical leadership during their time with the company.

Dr. Arslan Basharat was promoted to Technical Leader on the Vision team. Dr. Basharat joined Kitware in 2009 as an R&D Engineer. His promotion is in recognition of his leadership and growth of the company’s video tracking expertise.

Dr. Sébastien Barré has been promoted to Financial Systems Lead.  Sébastien joined Kitware in 2001 as an R&D Engineer. His promotion is in recognition of his being a driver of the creation of Kitware’s internal timekeeping and billing system, which has significantly improved the company’s financial workflow.

Katie Osterdahl was promoted to Communications Lead in recognition of her proposal management and leadership skills. Katie joined Kitware in 2010 as Communications Specialist.

2nd Annual OSEHRA Summit & Workshop
September 4-6th; Bethesda, MD
Wesley Turner is a Co-chair on the Tutorial committee, and Rick Avila is a member of the Program Committee; Luis Ibáñez will be attending.

MICCAI 2013
September 22-26th; Nagoya, Japan
Kitwareans will award the Young Scientist Publication Imapact Award, present papers, assist with the conference as part of the MICCAI Society board, and attend the 6th annual workshop on Systems and Architectures for Computer-Assisted Interventions.

New Employees
Meredith Lapati
Meredith Lapti joined the Kitware team in Clifton Park, NY as a Compliance Specialist. Before coming to Kitware, she worked as a staff accountant where she was responsible for conducting audits and reviews of non-profits, corporations, and employee benefit plans; assisted with the filing of financial reports; and provided third-party administrative services.

Sonia Ayme
Sonia Ayme joined the Kitware team in Lyon, France as a Communications Project Manager for the growing European office. Sonia brings a diverse set of skills to KEU, including strategic communications such as media planning, public relations, and social media. She also has experience managing and organizing events and seminars, and analyzing organizational costs for optimization.

Meriadeg Perrinel
Meriadeg Perrinel joined Kiware’s Europrean office in Lyon, France as an R&D Engineer. He holds an engineering degree in digital imaging from ESIR-Rennes, which he received in 2010. Always on the watch for technological developments, his interests and knowledge are largely focused on developing 3D technologies.

Scott Spurlock
Scott Spurlock joined Kitware as an intern on the Computer Vision team in Clifton Park, NY.  Scott is a current Ph.D. student and research assistant at the University of North Carolina at Charlotte, where he focuses on computer vision and machine learning topics.

Catherine Dumas
Catherine Dumas joins Kitware in Clifton Park, NY as an intern on the Medical Computing team. Catherine is a Ph.D. candidate studying informatics at the State University of New York at Albany, where she also teaches the informatics senior seminar and topics in information science classes.

Joshua Cope
Joshua Cope joins Kitware in Clifton Park, NY as an intern on the Medical Computing team. He currently studies information systems and technology at the State University of New York at Albany, and holds an A.S. in computer science from Fulton-Montgomery Community College.

Kristine Jessamy
Kristine Jessamy joined Kitware in Clifton Park, NY as an intern on the Medical Computing team. Kristine is a current student of information systems and technology at the State University of New York at Albany.

Christina Viccaro
Christina Viccaro joined Kitware in Clifton Park, NY as an intern on the Medical Computing team. Christin is a current student of computer science and mathematics at the State University of New York at Albany.