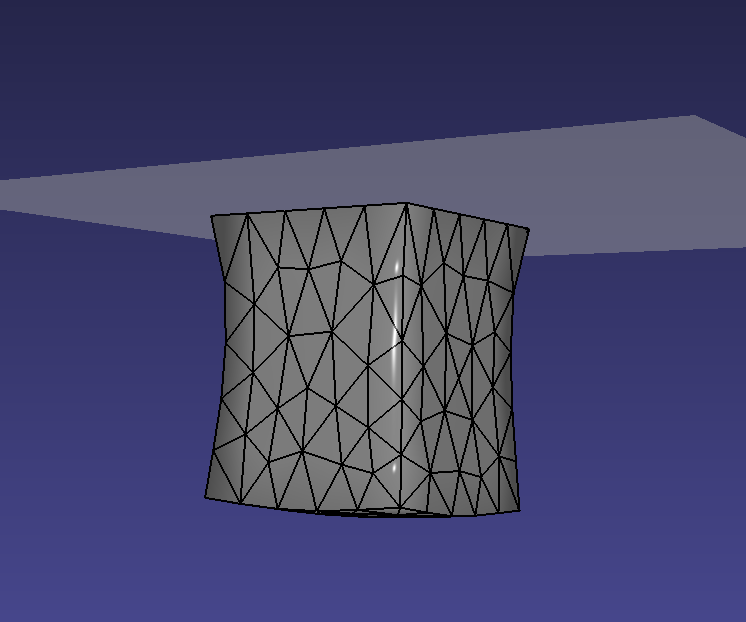 In medical training, adhesive contact may be observed between surgical tools and internal organs [1]. This contact is caused by adhesive forces [2]. Adhesive forces tend to oppose the relative motion of bodies under contact and result from material damage that occurs on a microscopic scale [3].

Figure 2 shows various stages of detachment for the same block under the influence of its own weight over time. Modeling such simulations with adhesion in real time involves formulating non-contiguous, regime-based, physical phenomena, which generally produces the mixed linear complementarity problem (MLCP) [4]. Numerical methods that formulate these phenomena combine traditional ideas for solving linear algebraic systems (e.g., fixed-point iteration and pivoting [5]) with a decision-making step. This step implements a metaphorical “if-else” to find the solution to the MLCP [6].

IACS can adapt to various models of adhesion, and it can be applied to real-time simulations [1]. As an example, the team chose a model of adhesion proposed by Raous, Cangémi and Cocu [8]. In this model, the two states of bodies under contact, bonding (adhesion) and debonding (detachment), are characterized by a rate-dependent adhesion intensity (β) [8]. Gascón, Zurdo and Otaduy [9] simulated this model in a mechanical system. The approach in Gascón, Zurdo and Otaduy [9] treats adhesive forces in three orthonormal directions in the local contact frame of reference as unknowns at each contact point. At each time step, the inverse of the coefficient matrix of the system gets computed [9]. This results in a bottleneck with

computational complexity. Thus, the approach has limitations when applied to real-time simulations [1].

Alternatively, to refrain from inverting the system matrix, IACS splits the unknowns into contact states (bonding or debonding), contact forces (adhesive and normal) and displacements [1]. This allows the adhesive forces to be treated explicitly. In addition, whereas the approach in Arikatla et al. [7] first estimates the states/forces in an approximate solver and then solves for the final state, IACS continually updates the states and forces until it undergoes convergence [1]. According to the convergence criteria, IACS stops when the change in the displacement field between consecutive iterations is less than a preset threshold.

It is important to note that the converged solution that is based on this criteria is not guaranteed to be the solution to the MLCP. The fact that the unknown contact states and adhesive forces are not implicitly formulated as part of the MLCP system makes it difficult to establish practical residual-based convergence criteria.

As Figure 4 depicts, the team tested IACS on a case in which a rigid tool interacted with a liver [1]. The testing focused on adhesive forces; it did not consider frictional forces, which are generally coupled with adhesive forces.

Figure 5 graphs some of the team’s preliminary results. These results were presented at the 2017 International Conference on Computational and Mathematical Biomedical Engineering (CMBE) [1]. Frictional forces can be incorporated in future work without discounting the present approach, as IACS can extend to models of friction. The team not only plans to incorporate frictional forces in future work, but it seeks to understand the theoretical guarantees that IACS can provide for convergence under certain assumptions of models of adhesion.

This material is based upon work supported by the United States Army Medical Research Acquisition Activity (USAMRAA) under Contract No. W81XWH-16-C-0094. Any opinions, findings and conclusions or recommendations expressed in this material are those of the author(s) and do not necessarily reflect the views of the USAMRAA.

Sreekanth Arikatla is a senior research and development engineer at Kitware. His interests include numerical methods, computational mechanics, computer graphics and virtual reality.

Mohit Tyagi completed a research and development internship on the medical computing team at Kitware. He currently works at Altair Engineering, India, as a solver development engineer. His interests include inverse problems, computational mechanics and numerical methods.

Andinet Enquobahrie is the director of medical computing at Kitware, where he manages projects for image-guided intervention, quantitative imaging and surgical simulation.

Grace Chen is a senior project engineer of computational medicine and biology at CFD Research Corporation. Her research focuses on computational biomechanics, injury prevention and mitigation as well as composite damage and failure modeling.