DARPA Awards Kitware $11 Million for Phase II of VIRAT Program
Kitware has received an $11 million contract from the Defense Advanced Research Projects Agency to lead Phase II of its Video and Image Retrieval and Analysis Tool (VIRAT) program. Kitware was selected to lead the sole Phase II award based on the success of their Phase I effort.

In Phase II of VIRAT, Kitware will lead the development of the second-generation VIRAT system, a revolutionary video analysis capability that filters and prioritizes massive amounts of archived and streaming video based on events; presents the high-value intelligence content clearly and intuitively to video analysts; and results in substantial reductions in analyst workload while increasing the quality and accuracy of intelligence yield.

The VIRAT system is focused on aerial surveillance video taken from Predators and other drones. VIRAT automatically extracts descriptors of events and human actions in the video, emitting real-time alerts of events of interest. The system also indexes the descriptors into a database to enable subsequent search for similar and related events. Specific examples of distinguishable events range from single-person (walking, limping, gesturing) and person-to-person (meeting, following, gathering) behaviors to person-vehicle interactions, among others. 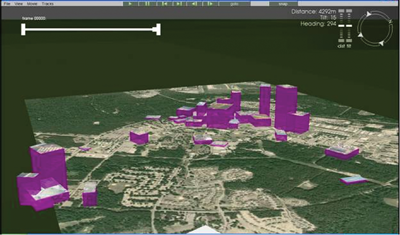 A visualization of a video query result where each purple tower is a video clip retrieved from a video archive. Height indicates the level of similarity to a query video clip supplied by a video analyst. The analyst can browse the result clips in 3D+time by watching all clips play simultaneously on the towers.

In Phase I, the Kitware team developed a number of novel algorithms and systems to address the VIRAT problem, including: algorithms capable of detecting and tracking small, slow-moving objects over time; a large bank of state-of-the-art, complementary action and object descriptors that can capture track-level and articulated events; algorithms for using analyst feedback to iteratively refine queries to quickly determine analyst intent; and innovative techniques for indexing and searching the descriptor database.

In Phase II, the Kitware team will deploy a VIRAT prototype at an end-user facility, and train analysts in its operation. Their evaluation and feedback will provide researchers with critical data to incorporate into upgrades and enhancements.

The team will also continue to develop and apply cutting-edge research into the hard problems in descriptors, indexing, iterative query refinement, and descriptor fusion. One of the many research thrusts in Phase II will be to incorporate more computed and supplied scene knowledge directly into the descriptors, and to more effectively leverage available metadata such as view point and sun angle. Augmenting system capabilities to allow for additional video sources, both from UAV’s and ground cameras, will also be a top priority.

Phase II is expected to take 18 months to complete, and will be led by Anthony Hoogs and Amitha Perera at Kitware.

The main focus of the project will be the development of a robust respiratory motion correction technique aimed at producing more effective PET-CT guided biopsies. Kitware and its team of researchers will develop a respiratory motion correction algorithm to help develop a better technique, which decreases errors in imaging caused by artifacts like organ sliding which can occur just from the natural respiration process.

”While PET imaging can localize malignancies in tumors that do not have a CT correlate, the diagnostic benefit is often gravely affected by basic respiratory motion,” said Dr. Andinet Enquobahrie, technical lead at Kitware and one of the principal investigators for the project. “The difference in acquisition times between PET and CT data often leads to discrepancy in spatial correspondence which then causes problems with tumor localization. With this grant, Kitware will develop robust respiratory motion correction technique to correct this and reduce incorrect tumor staging.”

Kitware will team up with Dr. Kevin Cleary at Georgetown University for development of some of the components and clinical evaluation of the system. Under the leadership of Dr. Cleary, the Computer Aided Interventional and Medical Robotics (CAIMR) group at Georgetown has developed a number of applications for improving the accuracy of interventional procedures. Kitware and Dr. Cleary have a long and productive relationship collaborating on several NIH-funded STTR, SBIR and RO1 projects over the past five years. In addition, the research team has contracted two consultants with extensive expertise in PET imaging and clinical use of PET-CT imaging for interventional procedures.

Upon completion, the system will display the motion-corrected, fused and side-by-side, PET and CT images for interventional radiologists to view. Electromagnetic tracking of the needle tip using the image-guided system will provide continuous monitoring of the needle relative to the PET and CT images. The radiologist would then use this virtual image display of metabolic and anatomic information to guide the needle to the lesion. This system will enable future applications beyond biopsy, such as ablations and the delivery of other minimally invasive therapies.

Kitware Ranks #1655 on the 2010 Inc. 5000 with Three-Year Sales Growth of 172%
Kitware has made the Inc. 5000 list for the third year in a row, with a ranking of 1655. The Inc. 5000 is a listing of the fastest-growing, privately-held companies in America. The list represents the most comprehensive look at the most important segment of the economy—America’s independent-minded entrepreneurs. Music website Pandora, convenience store chain 7-Eleven, Brooklyn Brewery, and Radio Flyer, maker of the iconic children’s red wagon, are among the prominent brands featured on this year’s list.

“The leaders of the companies on this year’s Inc. 5000 have figured out how to grow their businesses during the longest recession since the Great Depression,” said Inc. president Bob LaPointe. “The 2010 Inc. 5000 showcases a particularly hardy group of entrepreneurs.”

Over the last 12 months, Kitware has grown its workforce by 28% and is continuing to hire to fill positions in computer vision, medical imaging, informatics, scientific visualization and open access publishing. For more information on Kitware’s hiring needs, please visit kitware.com/jobs.

Complete results of the Inc. 5000, including company profiles and an interactive database that can be sorted by industry, region, and other criteria, can be found on www.inc.com/5000. 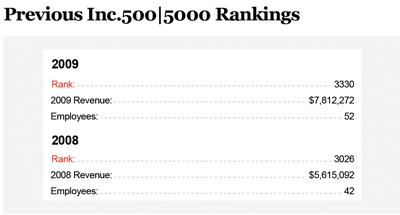 Kitware Participates in Military Open Source Software Working Group
In August, Kitware participated in the second iteration of the Military Open Source Software Working Group (MIL-OSS). The company has had representatives at each of the iterations of this working group which aims to grow open-source adoption and contribution within the Department of Defense and its burgeoning contractor community. This year’s conference featured speakers from each branch of the armed services as well as speakers from companies dedicated to open source such as Redhat and Puppet Labs.

Lockheed Martin had representatives to present their work on Eureka Streams, a new open-source project sponsored and developed within that company, which is perhaps an illustration of the greater movement toward open source software within the government contracting community. Seeing the large, traditional defense contractors embrace open-source and contribute back to the community is a testament to the growth in awareness of open technology in recent years.

The Defense Information Systems Agency (DISA) also spoke about their work with Collabnet (the custodians of Subversion) to develop Forge.mil, a Source Forge for “community source” projects within the military. This allows projects that are deemed too sensitive in nature for public consumption to be shared within the government and other trusted entities. Forge.mil and traditional open-source seem to have a bright future in the years ahead.

Kitware’s Patrick Reynolds and Chuck Atkins participated in many of the lively panel discussions and after-hours philosophical arguments about how the DoD can best benefit from open source. Mr. Reynolds was given the opportunity to give an Ignite presentation on “Open-Source Continuous Integration using CMake and CDash” during one of the speaking sessions. Ignite talks are five minute talks with 20 slides that auto-advance every 15 seconds. The six Ignite speakers presented at breakneck speed over topics as diverse as large-scale system administration and combat-relevant position-location information.

As Kitware’s business involves collaboration with more and more traditional defense contractors, interactions with vibrant communities like MIL-OSS will help broaden the reach of open source within government.

Kitware and the NA-MIC community announce Alpha Release of 3d Slicer 4.0
3D Slicer is an open-source (BSD-style license) platform for medical image segmentation, registration, visualization and analysis. It represents a practical integration of innovations from a multitude of fields including medical image analysis, cross-platform software development, collaborative software development and extensible platform design. Kitware has been closely involved in many of these innovations. In particular, 3D Slicer builds upon ITK, VTK, CMake, CDash, CTK and MIDAS.

Slicer is funded by grants associated with the National Alliance for Medical Image Computing (NA-MIC) and the Neuroimaging Analysis Center (NAC) and has an extensive community behind it. The lead institute for these multi-institutional centers is Brigham and Women’s Hospital (BWH). Other funded participants include the University of Utah, GE Corporate Research, the University of North Carolina at Chapel Hill, Georgia Tech, Johns Hopkins, MIND Institute, MIT, MGH, UCLA, and many others.

To date, 3D Slicer contains 95+ modules that cover a large range of applications including tractography, endoscopy, tumor volume estimation, image guided surgery and more. Special attention has been given to documenting each module and creating tutorials that cover many of the most common use-cases for Slicer. Over 400 publications acknowledge funding from one or more Slicer-related grants. Those publications span a wide range of medical, biomedical, pharmaceutical, and other basic and applied science domains.

Version 4.0 of 3D Slicer is a systematic rewrite of the Slicer platform. The main Slicer application now adheres to high programming standards (e.g., unit tests and a clean model-view-controller design) and has adopted Qt for its GUI. Compared to Slicer 3.X, Slicer 4.0 has cut the number of lines of code necessary for most features by 70 percent. Slicer 4.0 is faster, more stable, more extensible, and more developer and user friendly than Slicer 3.X. Tcl is gone and has been replaced by Python and CMake’s Superbuild. The modules’ user interface can be effortlessly generated using Qt Designer to allow the programmer to focus on algorithms. 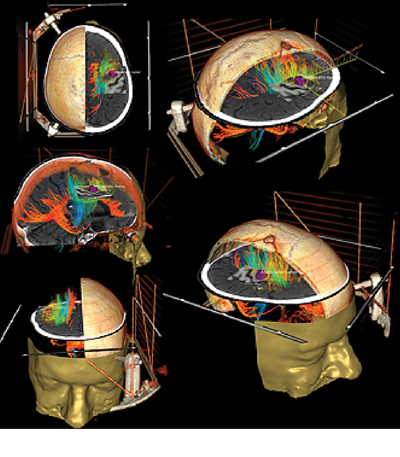 Contrast enhanced CT (with the stereotactic frame of a gamma-knife device), anatomical MRI and diffusion tensor MRI have been registered and segmented to produce this image. Fiber tracking allows the clinician to examine brain connectivity. Neurosurgeons use such fused views to determine tumor margins and surgical paths. This image was generated using 3D Slicer. In particular, 3D Slicers’ affine registration module, DTI fiber tracking module, and connected component segmentation module were used. All of these modules are built using VTK and ITK and are available as open-source as part of the 3D Slicer distribution. This image was generated by Andras Jakab, University of Debrecen, Medical School and Health Science Center, Hungary. This image won 2nd place in the 2008 Best Biomedical Visualization Contest hosted by Kitware (The Source volX issueY).