The support part of the contract has included teaching a VTK and a ParaView course at LANL, answering technical questions about VTK and ParaView (for example, assisting a LANL developer with writing a parallel time varying reader plug-in), and cleaning and committing LANL improvements to VTK and ParaView (for example, upcoming Manta Real Time Ray Tracer RenderWindow and Renderer classes).

The bulk of the work has been custom development, all of which will be contributed back to VTK and ParaView after it is published. Kitware recently accomplished one of the two major custom development goals by extending ParaView’s Comparative View to suit LANL’s immediate needs. Comparative Views make it easy for the user to compare closely related datasets by displaying them from the same viewpoint in multiple windows simultaneously. For example, Filmstrip mode shows time varying data at different points in time. Kitware has also added Quantitative display (i.e. plots and charts) to Comparative Views. Now ParaView users can easily compare numerous related datasets using a mix of 3D visualization and 2D plotting. Furthermore, with high resolution data, each view can require an entire display to be interpreted correctly. In this situation tiled displays become extremely useful. This was accomplished by adding Sandia contributed code that transports the Qt Client rendered Quantitative images to the server nodes which then draws them into the appropriate tiled display windows. 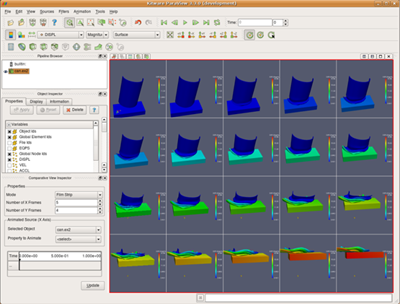 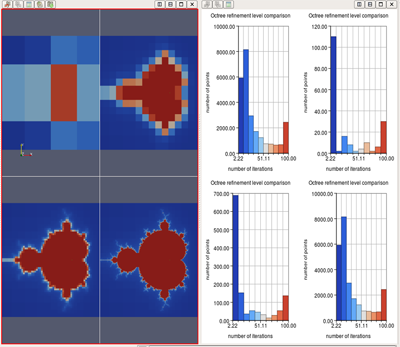