ParaView 4.0.1 is now available for download. This release marks the first change in the major version number since 2007. Unlike the change from 2 to 3, however, this release is not a major departure from the 3 series, but marks a milestone in the gradual progression of ParaView UI and framework since 2007. These notes highlight some of the major enhacements in this version that addresses over 130 issues since the most recent release. ParaView 4.0.1 is based on VTK 6.0 and hence includes all the fixes and enhancements that went into the VTK 6.0 release.

This release introduces a new way for interacting with multi-block datasets, making it easier to change display parameters such as visibility, color, and opacity for multi-block datasets. Using the Multi-Block Inspector, users can now specify such properties on a per-block basis. By treating the multi-block hierarchy as a basic scene-graph, properties specifications can be inherited, thus avoiding the need to explicitly specify overrides for all blocks.

Enhancements to the Properties Panel

The Properties panel has been undergoing changes in the past few releases. This release includes further cleanups, bug-fixes and enhancements including a newer and cleaner look for the Properties panel with the ability to group widgets based on functionality. The plugin framework has now been extended to enable users to add custom widgets for the new properties panel. Refer to this blog post covering how to effectively use the new panel. Developers are referred to ParaView Wiki for additional details.

One of the most requested features on ParaView User Voice was the ability to add mathematical markup to annotation text. ParaView can now use the equation rendering support in the matplotlib package to generate mathematical equations in selected text fields. The support for mathtext was added in 3.98 and has been expanded in this release to include chart titles, scalar bar title and labels, along with text sources. ParaView binaries come bundled with matplotlib. Siimply use $$ as the text to use. Anything containing the $…$ symbols will be treated as math-text and rendered using matplotlib. Refer to this blog post.

One of the most requested features on ParaView User Voice was to add support for vector graphics. With this release, it is now possible to export scenes from 3D views and charts as postscript, eps, pdf, or svg vector graphics. All text and annotations such as scalar bars, cube-axes, and curves in charts are exported as vector graphics, thus ensuring crisp reproduction for publications. 3D surfaces and volumes, however, must remain embedded as a rasterized image in the resulting output file. Refer to this blog post for more details.

Using Web-based technologies for 3D interactive visualization is now easier than ever before with the totally redesigned ParaViewWeb. ParaViewWeb is a collection of components that enables the use of ParaView’s visualization and data analysis capabilities within Web applications and is now simply a part of ParaView source (and binary) packages. Using the latest HTML 5.0 based technologies, such as WebSocket, and WebGL, ParaViewWeb enables communication with a ParaView server running on a remote visualization node or cluster using a lightweight JavaScript API. Using this API, Web applications can easily embed interactive 3D visualization components. Application developers can write simple Python scripts to extend the server capabilities including creating custom visualization pipelines. Updated documentation and examples coming soon, so stay tuned.

ParaView’s CoProcessing support has undergone several usability improvements with the ability to build adapters externally, and cleanups to the Python coprocessing modules and scripts. Additional details will soon be available in form a Catalyst/CoProcessing Users Guide in the near future.

We have added several new enhancements to scalar bar in this release. Besides general improvements in the appearance and label rendering, the scalar bar now has the ability to accept MathText (similar to LaTeX) for the title, subtitle, and annotation text. Similar to including MathText in chart titles and text sources in previous release, any text that enclosed within dollar ($) signs, ($…$) will be presumed to be MathText. This requires Python support with matplotlib available, which is included in the distributed binaries. You can now include Greek letters and other math symbols in your legend.

Another new feature is that colormaps may now be marked to indicate that their domains are ratio or interval-scaled (i.e., continuous, as in previous versions of ParaView) or categorical (also called nominal). Categorical colormaps are not shown as a continuous range of colors but as a discrete set of color swatches. You may set the text to accompany each value in the Annotations tab of the color legend editor. Arrays that hold categorical data (where there are no more than 32 unique values stored across all array entries) will automatically have annotations added when you open the color legend editor. When switching a colormap between ratio and categorical modes, the color set-points in the continuous color bar are used as the colors to assign to categorical values; the default blue-to-red colormap has only 2 color set-points, so if you switch from this preset to a categorical colormap, you will see only 2 color swatches: red and blue. However, another new feature is that several categorical colormap presets have been added, including the Brewer palettes. You may wish to choose one of these presets (which will automatically switch the colormap to categorical mode). 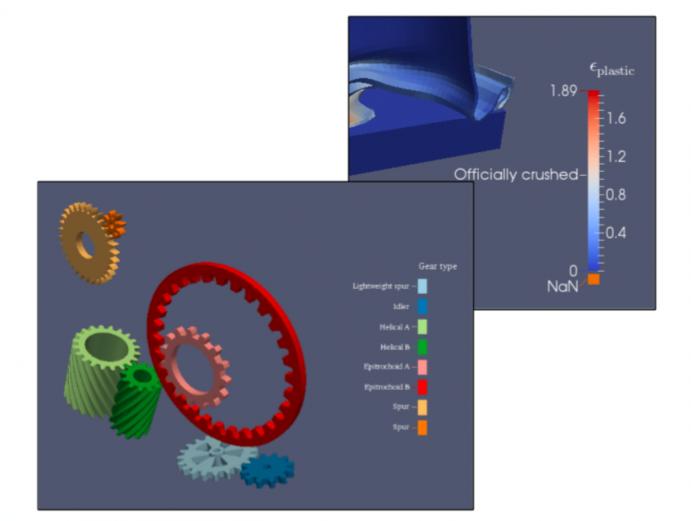 Starting with this release, we will now be providing online documentation for the Python and JavaScript API along with the C++ API online. The documentation can be accessed from the ParaView web site.

For users interested into trying out the latest and greatest developments for ParaView as the development team works on them without building from source, they can download the nightly builds from the ParaView download page.

As always, we look forward to your feedback. Also stay tuned to the Kitware Blog for more details on Catalyst and ParaViewWeb.