One of the things I really love about working on open-source projects is seeing where people take the things I’ve worked on. The latest example of this that just blew me away was with a CFD code called PHASTA, led by Ken Jansen at UC Boulder. Short for Parallel Hierarchic Adaptive Stabilized Transient Analysis, six years ago PHASTA was one of the first codes that ParaView Catalyst was prototyped with. Fast forward to a couple of months ago and I hear that Michel Rasquin, one of Ken Jansen’s postdoctoral researchers that’s now at Argonne National Laboratory, piloted remotely a PHASTA simulation instrumented with Catalyst on 256K MPI processes of the Argonne’s Mira system, an IBM BlueGene/Q. The Argonne Leaderships Computing Facility (ALCF) presented this live demonstration at the National User Facility Organization (NUFO) Annual Meeting in Washington, DC. This just blew me away (FYI: you can find the details of their latest CFD configurations along with a strong scaling analysis of PHASTA in their paper available from this link: http://www.computer.org/csdl/mags/cs/2014/06/mcs2014060013-abs.html). I won’t go into the full details of their setup but some of the Catalyst details of their runs include: 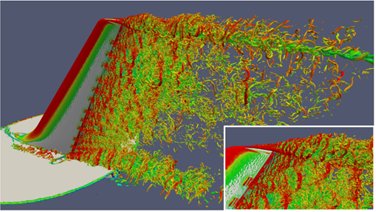 As I mentioned above, the runs were done using the full edition of ParaView Catalyst from ParaView 4.1. Since that time, significant improvements have been made to ParaView Catalyst that would have made the runs even more efficient.  The first improvement was for handling the Python script. Since ParaView 4.2, process 0 reads the main Catalyst Python script and broadcasts it out to the other process. Each process then runs the script in the linked-in Python interpreter. This saves on file IO in two ways. First by having only a single process read the file and second by not having each file trying to write a .pyc file to disk (they did that by setting PYTHONDONTWRITEBYTECODE to a positive value to get the same effect). The other improvement is that there is now also a rendering edition of Catalyst. This reduces the Catalyst library memory overhead by roughly 50%. You can look at the paper by Nathan Fabian, et.al. for more information on this.

So in summary: wow, someone ran a Catalyst enabled simulation with 256K MPI processes and if they were to do it with the newly released ParaView 4.3, it would be even faster and easier than before.