With simple zero-dimensional data, basic statistics of a population can be displayed with a boxplot. A boxplot shows the median, interquartile range, and outliers in a population described using single scalar values. For example, you can plot the distribution of ages for a random sampling of 40 individuals. The boxplot shown below enables you to identify the median age, the interquartile range, and individuals who are outliers. The boxplot is an effective way to represent statistics about a population via the actual measurements from individuals within that population. 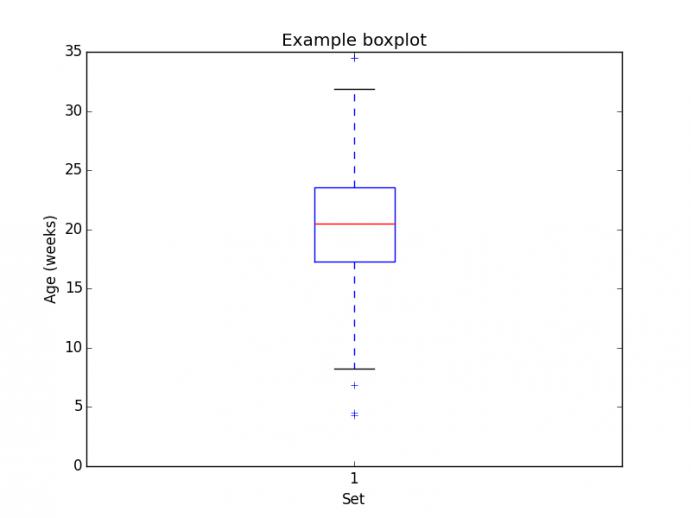 For our work on the project "Predictive Modeling for Treatment of Upper Airway Obstruction in Young Children" with collaborators at UNC, we are working with one-dimensional curves that represent airway cross-sectional area as a function of depth in the airway. A challenge with this data is to compute and display statistics over the population of curves. One might consider creating a point-wise average curve to represent a typical airway, but this might smooth out the data and produce a representation that is not reflective of any one individual. The same is true if we estimate airway typicality with a point-wise median/interquartile range calculation along all the curves.

An alternative solution uses individual curves from the population to represent the population median and interquartile range. This method relies on the calculation of a quantity for each curve called the "band depth". The band depth is essentially a measure of how often one curve is bounded above and below by other curves in a set. The curve with the highest band depth is considered the "most typical" and is equivalent to the median. The interquartile range for the functional boxplot is the region bounded by the top half of the curves, ranked by band depth.

Though there was an existing module to generate unweighted functional boxplots, it was not possible to apply weights or use different methods to calculate band depth. We have developed a python module called AtlasBuilder that can do both of these things. Below you can see a set of functional boxplots produced from identical data using different generation algorithms. 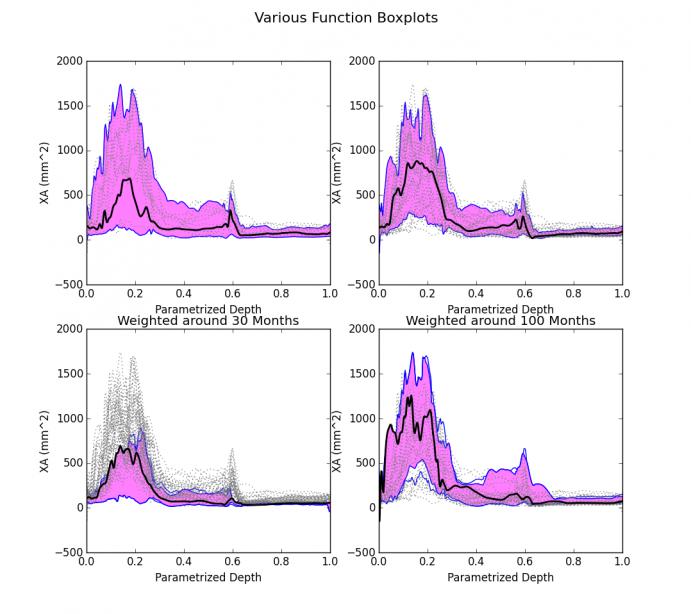 The top row represents the results from two separate algorithms to calculate band depth with no weighting. The bottom row shows the plots for the population of 30-month-olds and 100-month-olds respectively. Note the overall increase in cross-sectional area for the 100-month plot. The black curves are the medians of each plot. The dotted lines are outliers. The magenta region is the area bounded by the curves that represent the interquartile range. The blue lines are not actually curves from the population but are the point-wise upper and lower bounds generated from the curves that envelope the magenta region. In the weighted functional boxplots there are two blue lines visible outside of the interquartile region. These lines indicate the region bounded by the curves with 99.7% of the population weight.

The data that went into these graphs was generated from the cross-sectional area of the airways from control subjects derived from CT scans. The curves are registered using several anatomical landmarks so that each anatomical landmark is at the same parametric depth along the curve for each individual in the population.