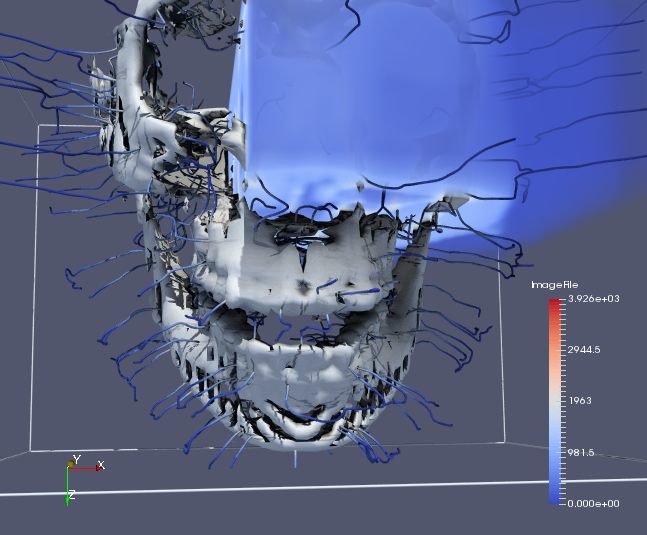 The Visualization Toolkit (VTK) development team began the release cycle for version 7.1. The team plans to push the final release in November 2016 and showcase it at The International Conference for High Performance Computing, Networking, Storage and Analysis (SC16).

Beyond rendering, the 7.1 release cycle expands time stamp counters in VTK, which go from 32 bits to 64 bits on Windows. This change allows applications to run for more than a few hours without crashing due to overflow, when they face frequent state changes.

In preparation for VTK 8.0, which will require C++11, VTK now uses VTK_OVERRIDE, VTK_DELETE_FUNCTION, and VTK_FINAL macros to support the features of the newer C++ syntax. To download the latest in VTK, please see http://www.vtk.org/download.

The ParaView development team has started the release process for version 5.2. The latest release candidate includes two new rendering techniques. The first technique is Fast approXimate Anti-Aliasing (FXAA). FXAA smooths jagged edges on lines and polygons in final images. The second technique is hidden line removal. With this technique, ParaView can render wireframes in a manner that shows the topology of an object but does not show the background wireframe surfaces.

The latest 5.2 release candidate comes with several other new and exciting features such as a ruler that measures distances in a scene. The release candidate also offers the ability to reload data files without reopening them and further improves rendering performance for composite datasets.

The development team expects to make the final release in November 2016. Moving forward, the team will implement a timely release cycle, which includes two planned releases each year. For more information on ParaView, please go to http://www.paraview.org.

The CMake development announced updates for the 3.7 release. These updates allow CMake to use simple toolchain files to cross compile on the Android operating system. Additional updates allow the source file signature for the try_compile() command to honor configuration-specific flags in test projects. Previously, the source file only recognized default flags.

The 3.7 release effort provides new Boolean comparison operations for the if() command. The effort also adds conditional support for Fortran to the Ninja generator. This support comes into play when the generator uses a Ninja tool that has the features necessary to utilize Fortran. In terms of specific CMake components, the effort improves CTest and CPack. In particular, the effort supplies CTest with test properties that support test fixtures.

To follow progress on the release cycle, which the development team expects to wrap up in November 2016, please read the related posts on the Kitware blog at https://blog.kitware.com. To download CMake, please refer to https://cmake.org.

The development effort for the release refactored the toolkit to combine several existing software components. In particular, the refactor integrated three projects into one repository: Vital, Arrows, and Sprokit. Vital provides support for logging and managing configuration files. Vital also offers support for core data structures and abstract algorithm application programming interfaces (APIs). Arrows delivers a collection of plug-ins that implements the APIs that Vital defines, and Sprokit supplies the architecture for combining the plug-ins into a pipeline for processing video or other streaming data.

As a result of the refactor, KWIVER hosts more features. It also presents a simplified process for building applications against its packages. This simplified process eliminates the need to find compatible versions of separate repositories. For more information on KWIVER and its components, please visit http://www.kwiver.org.