The VTK development team is pleased to announce that VTK 6.2.0 is ready for download. In this release, VTK’s use of parallelism in modern architectures continues to mature. In terms of managing pieces and extents in the pipeline, for example, VTK’s readers are now responsible for implementing translation, and its parallel filters are responsible for handling unexpected extents.

The release contains an update to the latest version of the Dax toolkit, along with a series of improvements to the SMP framework and the vtkSMP filters. The release also improves support for the Web with VTK-Web’s migration to WAMP 2.0. Furthermore, VTK-Web’s applications now support http-only server/client configurations for situations where WebSockets are not acceptable. VTK also now supports the creation of visualizations for the Cinema application, and support for Xeon Phi (MIC) chips is underway.

Additional highlights include upgrades to Tcl examples following modularization; changes to vtkPanel’s behavior in Java to better support advanced class loader systems, such as OSGI; and improvements to VTK-numpy integration, which include the introduction of a number of Python modules that provide numpy-compatible interfaces to VTK data structures. The release also introduces vtkPythonAlgorithm, which makes it easier than ever to quickly extend VTK with filters written directly in Python. 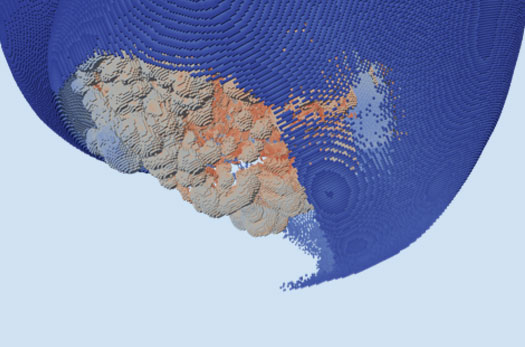 VTK 6.2 contains substantial enhancements to its rendering capabilities, including improvements to advanced color and display controls, as well as to “sticky” axes mode for vtkCubeAxesActor, to out-of-range color assignments, and to indexed color lookups for vtkStringArrays.

To download the latest version of VTK, please visit http://vtk.org/download.

With this release, the “Compile Features” functionality is now aware of features supported by more compilers including: Apple Clang (“AppleClang”) for Xcode versions 4.4 through 6.1, the GNU compiler collection (“GNU”) versions 4.4 through 5.0 on UNIX and Apple, Microsoft Visual Studio (“MSVC”) versions 2010 through 2015, and Oracle SolarisStudio (“SunPro”) version 12.4.

Also added in this release is CMake’s support for Unicode characters encoded as UTF-8 on Windows. Unicode characters may now be used in CMake code, in paths to source files, in configured files such as “.h.in” files, and in other files read and written by CMake.

For “add_custom_command()” and “add_custom_target()” commands, the release features a new “BYPRODUCTS” option to specify files produced as side effects of the custom commands. In addition, the “file(GENERATE)” command can now generate files that are used as source files for build system targets.
The 3.2 release of CMake is available for download on http://www.cmake.org/download.

On behalf of the Insight Toolkit community, we are pleased to announce the release of ITK 4.7.1. This release regards critical issues, regressions, important documentation, and compiler support. Notable in the 4.7.1 release is support for Visual Studio 2013, the ITKVtkGlue module with Visual Studio, and the upcoming Visual Studio 2015 release. The release also addresses common WrapITK Python runtime warnings and bugs.

Furthermore, ITK 4.7.1 includes style changes to the hardcopy of The ITK Software Guide, which is now available on Amazon.

The MAP-Tk 0.5.0 release offers new functionality including preliminary support for essential matrix estimation and camera initialization algorithms. It further updates the bundle adjustment tool to estimate a similarity transformation to place results in a canonical coordinate system when external constraints are not provided on position, orientation, and scale. The release also features support for image masks to suppress some undesirable tracks in the feature tracking tool.

A major release (1.0.0) is planned in the coming months that will restructure the code base, add true dynamic plugin loading, use Eigen 3 for linear algebra, add C and Python bindings, and more.

For more information on this release and to download the source code, please visit https://github.com/Kitware/maptk/releases/tag/v0.5.0.

ParaView 4.3.1 is available for download. ParaView 4.3.1 contains a new version of the Quad View plugin as a standard view, called Orthographic Slice View. This view makes it easy to look at axis-aligned slices in any data set. Furthermore, it is now possible to color data sets in ParaView by the value of a tuple in a field data array associated with a data set. Coloring by string arrays is also possible when the color map option “Interpret Values As Categories” is enabled and a set of annotations whose values are strings in the data array is defined.
In addition, a new button in the Color Map Editor enables adding active values from all visible objects that are being colored by the array with the same name as the array coloring the active pipeline object. It is also now possible to optionally set specific colors for values above and below the color map range. Furthermore, the latest version of ParaView removes the requirement that only unsigned-char arrays can be directly mapped to colors without using a color transfer function.

For plugin and custom application developers, please note that this is the last release in which old style panels (e.g., pqObjectPanel) and subclasses will continue to work. Starting next release, all of these classes will be removed.

To download the latest version of ParaView, please visit http://paraview.org. 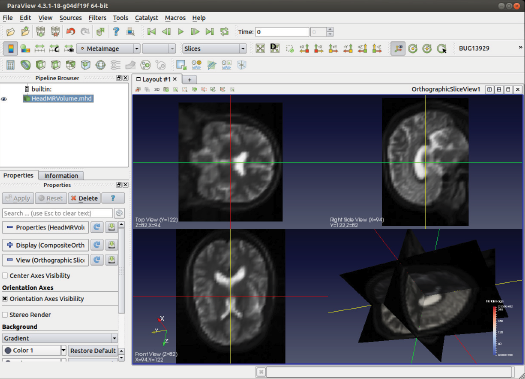