The ParaView team  has released version 3.98, the final major release in the 3 series. These notes give a summary of the major changes in this release, which address more than 300 issues. 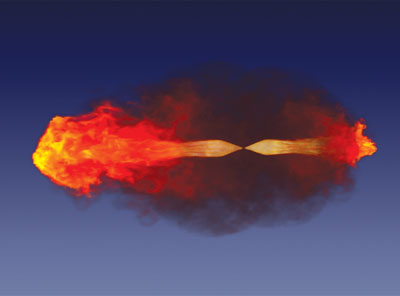 Exporting to PS/PDF: One of the most requested features on ParaView User Voice[1] was for support for vector graphics. It is now possible to export scenes from 3D views and charts as postscript, eps, pdf, or svg vector graphics. All text and annotations are exported as vector graphics, ensuring crisp reproduction for publications. However, 3D surfaces and volumes must remain embedded as a rasterized image in the resulting output file.

Math-text in annotations: The second most requested feature was the ability to add mathematical markup to annotation text. ParaView can now use the equation rendering support in the matplotlib package to generate mathematical equations; only categorical scalar bar annotations support this feature at the moment, but future releases will extend this capability to all text fields.

Simplified ‘Find Data’: The ‘Find Data’ dialog was simplified with the ability to specify complex queries for advanced users. Commonly used operations such as min, max, and mean are now accessible from the simplified interface.

New slice-based views: Two new views have been added to simplify data exploration using orthogonal slices. The Slice view allows users to quickly create, delete, and move an arbitrary slice along a given axis using an interactive user interface. The Quad view enables users to explore a dataset using three slices that are independently rendered in their own 2D view while a 3D view lets the user see slices’ positions in 3D space.

Modularization of VTK/ParaView: VTK was restructured to use a modularized approach for building various components, and ParaView’s build infrastructure was revamped to make use of this. Users may now build variants of the ParaView library while choosing only modules of interest from VTK. Thus, developers are able to build small, lightweight VTK and ParaView packages ideal for co-processing.

Improved co-processing: Catalyst [2] leverages the VTK and ParaView modularization by allowing users to simplify which parts of VTK and ParaView to link simulation codes to for in-situ processing. Note that Catalyst should be considered beta functionality. In addition, the co-processing library was modified to add in extra Python methods that give a cleaner look to the GUI-generated scripts.

This version of ParaView also includes an experimental interface to GPGPU processing in Los Alamos National Lab’s PISTON [3] library. The interface takes the form of a plugin (which must be compiled from source) that exposes Piston’s on-GPU implementations of the slice, threshold and iso-contour algorithms while minimizing transfers between the CPU and GPU.

Every release of ParaView includes excellent contributions from the community. The 3.98.0 release includes a completely redesigned ‘Memory Inspector’ panel for keeping track of memory usage across all ParaView processes, including remote processes (thanks to Burlen Loring at Lawrence Berkeley National Laboratory). A new ParaView reader plugin for LANL’s GMV file format has also been added (thanks to Sven Buijssen at TU Dortmund University) to support a wider set of keywords than the current one from VisItBridge.