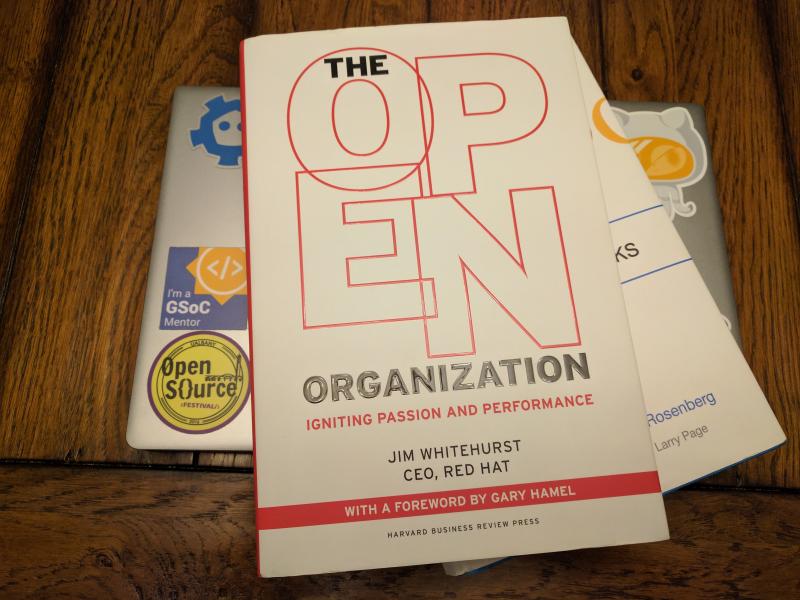 I received a review copy of ‘The Open Organization‘ when it first came out (June 2015), a book written by Jim Whitehurst, CEO of Red Hat. I started reading ‘How Google Works’ a few months before this at the recommendation of a friend too, both quite atypical of my normal reading habits. I highly recommend reading the Open Organization, and taking a look at the associated material developed since it was published.

During my tenure at Kitware I have witnessed the growth of our organization, along with some of the growing pains. I was attracted to Kitware because it was small, with a focus on open source software to analyze, process, and visualize scientific data. I would summarize my career as one that was born in open source, immersing myself in Gentoo Linux and later KDE with a Google Summer of Code project developing open source software at the end of my PhD. Coming from a background in open source and research in academic labs the move to industry was quite an adjustment.

I wish this book had been available as I was making this transition as I asked myself many of the same questions, and wondered whether more of the ‘open source way’ could be applied in business. I found both of these books interesting as they explore how it is possible to keep aspects of much smaller companies, with both discussing meritocratic models coupled with high levels of transparency. The Open Organization was the one that really drew me in as they document the exploration of applying open source models to operating a very large company.

I am most engaged when involved in the process of exploring a problem space and finding the best solution, and this tends to be easiest when companies are small before distinct roles are carved out. The book documents how Red Hat sought to apply the open source way used daily by their developers in creating open source to their organization as it grew, and to explore how the open source way can create better outcomes more supportive of the types of people they want at their company. In writing this book they have documented the process, warts and all, in the hopes that others can learn from what they have done, with an invitation to help extend and improve it.

The book is divided up into three parts exploring why, how, and what you get from opening up your organization. The two chapters in why really resonated with me: ‘Igniting Passion’ and ‘Building Engagement’ in your organization. Passion is contagious, it tends to multiply but it can also lead to a more heated workplace. I think one of the things I love most about working in open source, and formerly in a research lab, is being surrounded by passionate people who live and breathe what they do. I feel very lucky to be able to work on things that I am passionate about, many of which were things that impeded my work when I was doing research.

From the book, “Don’t you want your workers to be inspired and engaged in what they’re doing? The question becomes, then, do you really want employees to check their emotions at the door?” I think corporations often encourage some degree of this, but it is counterproductive when your work is creative. We want quite the opposite, we want to hire passionate people and find outlets for their passion and creativity. It makes the point that robots are capable of performing most of the mundane tasks many of the management books used to optimize for, in this day and age we want “innovative, intelligent, and, yes, emotional workers, who want to do far more than just show up and punch a clock”.

I can’t possibly do the book justice in a short blog post, but I hope that more of my colleagues at Kitware will read the book, and think about how we can be a more open organization. This is especially important as the company grows and covers multiple locations around the country (and world). I would also encourage you to think about your own organization, and what changes you can make. One of the great points the book makes is that this does not have to be top down, or bottom up, there are opportunities at all levels to be a more open organization. I think to realize the full benefit of the open source way it needs participation at all levels, but most big changes start small!

Especially relevant to companies as they grow, “Having boundless passion for the mission is common in start-ups. You might even argue that it’s a prerequisite to getting a business off the ground. But one of the challenges any organization has is how to keep the level of passion high even as it continues to grow and add new people in different locations.” One of the ways in which Red Hat tackles this is “an internal employment branding team that celebrates the people and activities that drive company culture forward and then takes that culture external to attract like-minded candidates to our growing company.”

It also talks about some of the internal conflicts “when the ‘freedom fighters’ face off against the ‘capitalists’ over key decisions related to the kinds of technology we use at an enterprise level all the way down to the desktop.” These are fights we have had internally, and I am sure it rings true in many organizations. Concluding later in that paragraph that “as an organization, we have had to learn how to best balance our passions so that they don’t become destructive.”

Another really interesting theme is that of being accountable, and Jim Whitehurst used a few examples of where it was painful to do so but that it was ultimately worthwhile. That many leaders are afraid of appearing weak when apologizing for an error, when employees usually see it quite differently (I know I do). He discussed a $100 million dollar acquisition, a failed roll out, and owning the failure. Saying “there was quite a bit of anger and frustration among Red Hatters who wondered why the company was falling behind”. He goes on to say “When you don’t explain your decision, people will often assume the worst: that you’re detached, are dumb, or don’t care.” I think these are valuable insights, and things I admire in management and in other companies when I see them publicly communicate what happened in major failures.

I think one of the most valuable take away points that I have had trouble articulating in the past is that “Being accountable to your employees is so much more than simply apologizing for your mistakes; it’s about sharing the rationale for why you made any significant decision if the members of your organization weren’t directly involved in making it”. Really this is all about how to foster deeper engagement, few of us respond well to having decisions handed down, and ultimately being involved in the process is the best way to make us feel engaged, like we are a part of the solution, and this requires you to really work on communication!

“The lack of frank dialogue is the single biggest controllable weakness that most companies impose upon themselves. Being nice and letting things slide add up over time to an organization that knows its core problems but is unable to act.” This is one area I have seen go really well in some communities, and terribly in others. Sometimes even the same people in the same communities/organizations can have a huge variation in the quality of debates, and as I have started managing projects I have thought about how I can encourage healthy debates.

I have certainly been guilty of being nice, or not raising something because it didn’t feel like a situation receptive to it. I don’t know if it is my British upbringing, or other unconscious biases, but this is something I know has been detrimental in the past, and I work to improve it (having made some good strides forward in recent years). I think this is also one of the things where the thickness of your skin can be an issue, and this is something I have heard Red Hatters mention as a point of contention about these approaches – is your organization ready to let the sparks fly? Getting meta, and quoting a quote from the book, attributed to Ed Catmull of Pixar:

It isn’t enough merely to be open to ideas from others. Engaging the collective brainpower of the people you work with is an active, ongoing process. As a manager, you must coax ideas out of your staff and constantly push them to contribute. There are many reasons why people aren’t candid with one another in a work environment. Your job is to search for those reasons and then address them. Likewise, if someone disagrees with you, there is a reason. Our first job is to understand the reasoning behind their conclusions. If there is more truth in the hallways than in meetings, you have a problem.

Another area that really resonated with me was that of effecting big changes within an organization. I can think of great examples where this has been inclusive, and others where things went terribly, often due to a lack of input. I love the philosophy promoted in the book where they say “We strive for change management to happen during the decision process, not during execution. We’ve learned that to bring about changes, it’s not enough to simply sell our associates on a decision after it has been made.” They have a great example of how they developed their mission statement, and the process used made everyone feel more ownership of it because they were involved in the decision making process.

They have actually measured the outcomes, and found that the likelihood of change being successfully implemented rose dramatically when the process was inclusive. The level of transparency in the decision making process is directly related to the effectiveness of turning those decisions into real change. This enables companies to be more agile, and I think it is the reason they have had so much interest from many large, established companies who want to remain competitive. These are principles that can apply to companies of all sizes, but I think more effort is required as a company grows in size, geographic distribution, and/or diversification of company mission.

My evil master plan is to work with lots of passionate people to create an environment where we can create the best open source software to enable open science. Maybe one of these days I will feel like we have done so well that I can get back into research! I actually started writing a post about this days after I received the book, one of the drafts was on our old blog and lost forever in the migration. This certainly goes down as the post I have been writing the longest, and procrastinated on the most…

If you got this far I hope you enjoyed it, I encourage you to go and read the book, and think about how you can make your organization more open.