Kitware was omnipresent at the 2010 Medical Image Computing and Computer-Assisted Intervention (MICCAI) conference held in Beijing China, September 20-24.  This blog highlights some of our involvement in that event:

1) Background: The MICCAI conference was formed from the merger of the CVRMed (Computer Vision, Virtual Reality and Robotics in Medicine), MRCAS (Medical Robotics and Computer Assisted Surgery) and VBC (Visualization in Biomedical Computing) conferences.  It has been held annually since 1998 and typically attracts over 800 participants per conference.  MICCAI features papers that emphasize the application of robotics and advanced image segmentation, registration, and visualization algorithms to clinical problems. 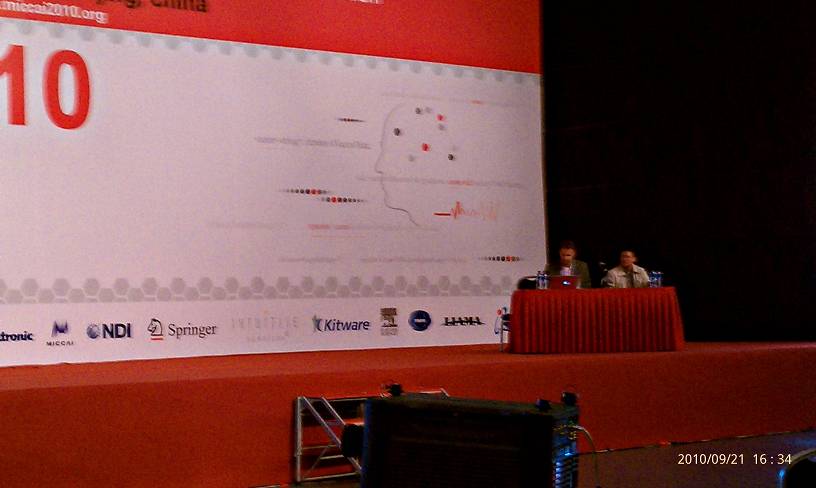 2) Kitware co-sponsored the 2010 MICCAI Young Scientist awards with NDI.  The MICCAI conference attracts some of the best student papers in the medical imaging field.  Typically, these papers are summaries of Ph.D. dissertations or M.S. thesis.  The winners must be full-time students and first-time presenters at MICCAI.  The winners are chosen by the MICCAI board, based on the quality of the work, paper, and presentation.   22 papers were eligible for this award: 11 from Europe, 10 from North America, and 1 from Asia/Australia.  In exchange for this sponsorship, Kitware’s logo was prominent next to the presentation podium (see above picture).  Also, Kitware (Stephen Aylward) was on-stage with NDI to hand out the awards to the five winners:

3) Luis Ibanez was an instructor at the “Microscopic Image Analysis and Visualization” tutorial.  The tutorial introduced recent developments and techniques of 2D, 3D, 4D, and 5D microscopic image analysis and visualization, with a central theme of the newly emerging field of bioimage informatics.

4) Luis Ibanez helped organize a National Library of Medicine (NLM) sponsored ITKv4 Mesh Hackfest to make progress on the refactoring of ITK’s Mesh classes.  It was held one evening from 6pm until the wee hours of the morning.

5) Stephen Aylward was an instructor at the “From MICCAI Algorithms to Clinical Translational Tools: The NA-MIC Platform” workshop.  This workshop addressed the critical step of maximizing the long-term positive impact of MICCAI algorithms by fostering their deployment, validation and concrete use by the clinical research community via Slicer.

6) Michel Audette contributed to the Mesh hackfest and also was active in asking questions during podium presentations.

8) Stephen Aylward attended the IEEE Transactions on Medical Imaging (IEEE TMI) Associate Editors annual meeting.   It was announced that IEEE TMI is now the #1 ranked journal in imaging science, #3 in biomedical engineering, and #7 in electrical engineering based on impact factor.

Not captured in the above specific events was the omnipresent nature of ITK, VTK, ParaView, and Kitware in the research featured at the conference.  As the Kitware folks moved through the conference hall we were often greeted by happy users, shown examples on how our efforts have succeeded, and learned how our efforts could be improved.

This was the first year that Kitware formally sponsored the MICCAI conference.  Without question it was a positive, rewarding, and enjoyable experience.  Special thanks goes to the MICCAI Society, NDI, the Chinese Academy of Sciences, NA-MIC, the National Library of Medicine, and the many others who made our participation possible.

P.S. A word about NDI, the co-sponsor of the MICCAI Young Scientist awards: NDI is a long-time friend and supporter of Kitware and IGSTK.   They sell magnetic and optical tracking devices used in robotics and surgical guidance.  They typically have a copy of the IGSTK book setting out in their conference booths, and their product brochures advertise that their devices are supported by IGSTK.  It was great to be on-stage with them!