VTK has long evolved beyond just visualization. It offers some amazing functionality that just cannot be found elsewhere. Two examples are the ‘ray-casting’ and, consequentially, ‘ray-tracing’ capabilities provided by the vtkOBBTree class. In this article, I would like to introduce these capabilities and show examples of ray-casting and ray-tracing performed exclusively through Python, a dash of NumPy, and VTK.

Disclaimer: The ray-casting and ray-tracing examples I will be presenting here are severely condensed versions of my posts “Ray Casting with Python and VTK: Intersecting lines/rays with surface meshes” and “From Ray Casting to Ray Tracing with Python and VTK” that appear on my blog [1]. If they pique your interest, please visit the aforementioned posts, where you can find all of the material and code (in the form of IPython Notebooks), as well as an excruciating amount of detail pertaining to each aspect of the process, as these posts were written for people with little to no experience in VTK.

I would like to emphasize a pivotal difference between ‘ray-casting’ and ‘ray-tracing.’ In the case of the former, we only ‘cast’ a single ray, test for its intersection with objects, and retrieve information regarding the intersection. Ray-tracing, on the other hand, is more physically accurate, as it applies laws of physics (e.g., reflection, refraction, attenuation, etc.) to the rays to ‘trace’ (i.e., follow) that ray and its derivative rays. However, ray-casting is the natural precursor to ray-tracing, as it tells us with what part of which object the ray intersects and provides all necessary information to cast subsequent rays.

The star of this post is the vtkOBBTree class, which generates an oriented bounding-box (OBB) ‘tree’ for a given geometry under a vtkPolyData object. Upon generation of this OBB tree, the vtkOBBTree class allows us to perform intersection tests between the mesh and the lines of finite length, as well as intersection tests between different meshes. It can then return the point coordinates where intersections were detected, as well as the polydata cell IDs where the intersections occurred.

For this demonstration, we are assuming that we have a surface model of a human skull stored in a .stl file, whose contents we have loaded into a vtkPolyData object, named mesh, through the vtkSTLReader class. A rendering of this model through the vtkPolyDataMapper class can be seen in Figure 1. 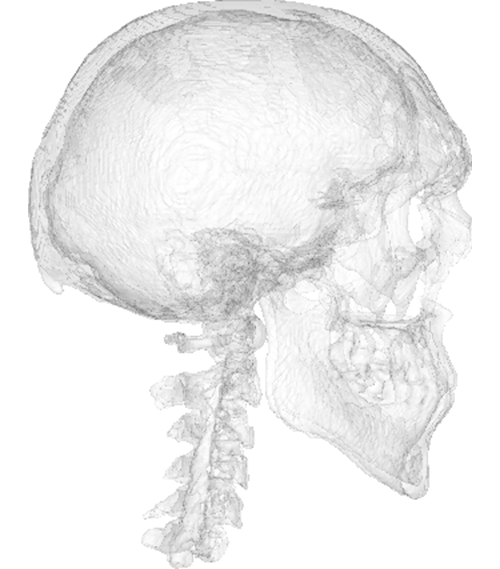 Figure 1. Rendering of the surface model of a human skull, which we will use to demonstrate ray-casting. 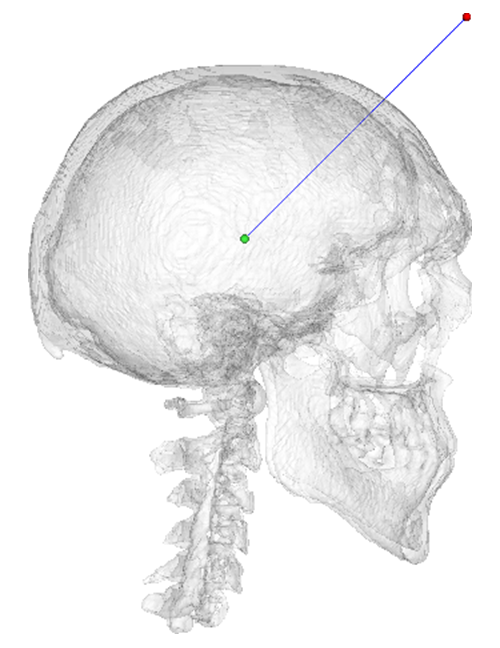 Figure 2. The ray that will be tested for intersection with the skull model. The ‘source’ point of the ray is rendered as red, while the ‘target’ point is rendered as green.

Prior to intersection, we need to create and initialize a new vtkOBBTree with the vtkPolyData object of our choice. In our case, this is called mesh and is done as follows:

Note the call to the BuildLocator method, which creates the OBB tree.

That’s it! We now have a world-class intersection tester at our disposal. At this point, we can use the
IntersectWithLine method of the vtkOBBTree class to test for intersection with the aforementioned ray. We merely need to create a vtkPoints object and a vtkIdList object to store the results of the intersection test.

As mentioned above, the points and cellIds now contain the point coordinates and cell IDs with which the ray intersected as it was emanated from the first point, i.e., (100.0, 100.0, 0.0), onto the second point, i.e., (0.0, 0.0, 0.0), in the order they were ‘encountered.’ The return value code is an integer, which would be equal to 0 if no intersections were found. A rendering showing the intersection points can be seen in Figure 3. 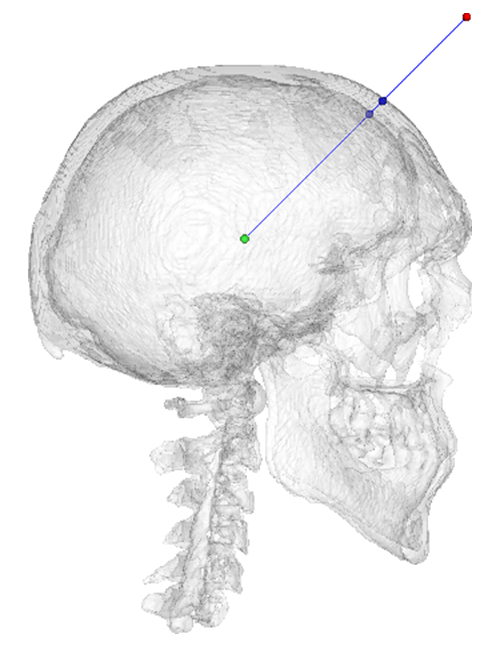 Figure 3. Result of the ray-casting operation and intersection test between the skull model and the ray. The blue points depict the detected intersection points.

The Python package pycaster [2] wraps the functionality shown above, assuming no VTK experience, and provides additional methods to calculate the distance a given ray has ‘traveled’ within a closed surface. It is currently being served through PyPI. The repository [3] can be found on BitBucket.

As I mentioned at the beginning of this article, the entire process shown above, including all of the material and code needed to reproduce it, is detailed in my post “Ray Casting with Python and VTK: Intersecting lines/rays with surface meshes” [4].

Now, in order to perform ray-tracing, we can take the lessons learned from ray-casting and apply them to a more convoluted scenario. The rationale behind ray-tracing with the vtkOBBTree class is the following:

Let’s assume a scene is comprised of a half-sphere dubbed sun, which will act as the ray-source, and a larger nicely textured sphere called earth, which will be the target of those rays. This ‘environment’ can be seen in Figure 4. 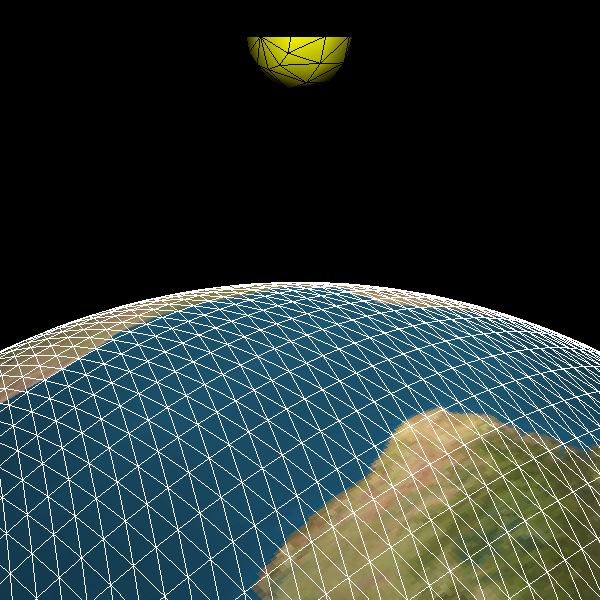 Figure 4. Scene defined for the ray-tracing example. The yellow half-sphere, sun, acts as the ray-source, while the textured sphere, earth, will be the target of those rays.

In this example, we will be casting a ray from the center of each triangular cell on the sun’s surface along the direction of that cell’s normal vector. The cell-centers of the sun were calculated through the vtkCellCenters class and stored under pointsCellCentersSun (of type vtkPolyData). The cell-normals of the sun were calculated through the vtkPolyDataNormals class and stored under normalsSun (of type vtkFloatArray). A rendering of the cell-centers as points and cell-normals as glyphs through the vtkGlyph3D class can be seen in Figure 5. 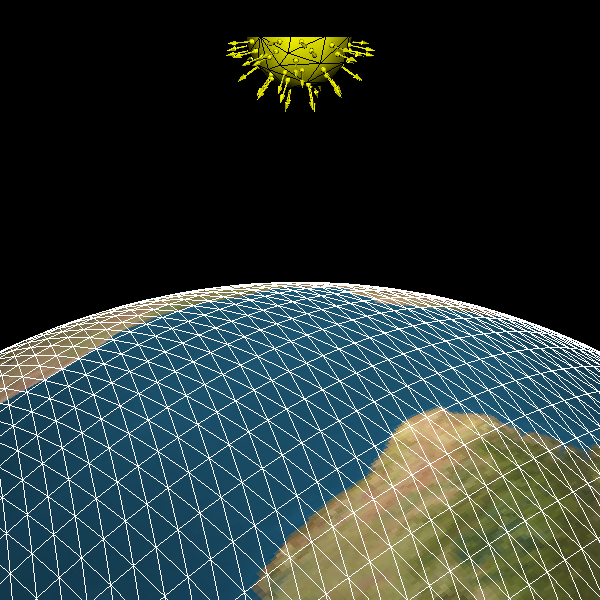 Figure 5. Rendering of the cell-centers of the sun that will act as source-points for the rays and the cell-normals along which the rays will be cast.

Similarly to what was done in the previous example, prior to ray-casting, we first need to create a vtkOBBTree object for the earth:

Now, since we will be casting a large number of rays, let’s wrap the vtkOBBTree functionality in two convenient
functions:

The isHit function will return True or False, depending on whether a given ray intersects with obbTree, which, in our case, will only be obbEarth.

The GetIntersect function simply wraps the functionality we saw in the first example. In a nutshell, it will return two list objects: pointsInter and cellIdsInter. The former will contain a series of tuple objects with the coordinates of the intersection points. The latter will contain the ‘id’ of the mesh cells that were ‘hit’ by that ray. This information is vital, as we will be able to get the correct normal vector for that earth cell and calculate the appropriate reflected vector through these ids, which we will see below.

At this point, we are ready to perform the ray-tracing. Let’s take a look at a condensed version of the code:

Please note that all rendering code was removed from the above snippet. What is done above is the following:

We casted a ray along the direction of that sun cell’s normal vector, stored under normalsSun. The ray emanates from pointSun to pointRayTarget.

As the vtkOBBTree class only allows for intersection tests with lines of finite length, not semi-infinite rays, the rays cast in the code above are given a large (relative to the scene) length to ensure that failure to intersect with earth would only be due to the ray’s direction and not an insufficient length.

Every ray was tested for intersection with the earth through the isHit function and the obbEarth object defined above.

The cell normals on the earth’s surface were calculated through the vtkPolyDataNormals class and stored under
normalsEarth (of type vtkFloatArray). This is the same way that normalSun was calculated.

A render of the ray-tracing result can be seen in Figure 6.

As I mentioned at the beginning of this article, the entire process shown above, including all of the material and code needed to reproduce it, is detailed in my post “From Ray Casting to Ray Tracing with Python and VTK” [6]. 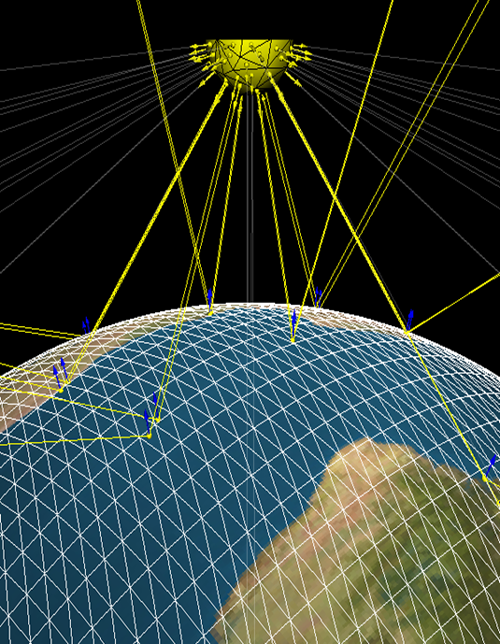 As you can see, VTK provides some little-known pearls that offer fantastic functionality.
While the above examples fall short of real-world ray-tracing applications, as one would need to account for effects like refraction and energy attenuation, the sky is the limit!

Adamos Kyriakou is an Electrical & Computer Engineer with an MSc. in Telecommunications and a Ph.D. in Biomedical Engineering. He is currently working as a Research Associate in Computational Multiphysics at the IT’IS Foundation (ETH Zurich), where his work and research are primarily focused on computational algorithm development, high-performance computing, multi-physics simulations, big-data analysis, and medical imaging/therapy modalities.

3 comments to Ray-Casting & Ray-Tracing with VTK